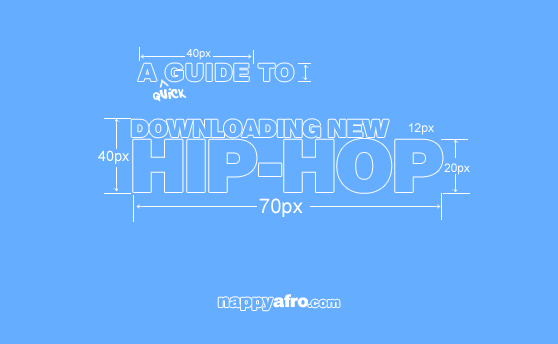 If you’re reading this, there’s good chance that you’re a Hip-Hop fan. If you’re a Hip-Hop fan that is Internet savvy, you probably download a lotta “leaked” tracks as well as free mixtapes (As well as other things but you on your own with that…). Free new music is a good thing. Gone are the days that you had to wait by the radio or watch television to hear new music. Now all the latest is at your fingertips.

With all this new music, I’ve found it’s sometimes a chore to listen to everything you want. Everyday an artist releases a new mixtape or free album via Internet. I personally have an ever-growing “new music” pile that has me questioning the size of my iPod. And remember, we haven’t even covered the music that isn’t new and old favorites you want to listen to (Not to mention new retail albums).

To help you with time and space (My sad 16GB iPod Touch is hurting), I’ve provided a quick guide to downloading new music on the Internet.

So you really like the song? Really?
Seems like an easy answer right? But think about, how many songs do you have in your possession that you really don’t like. Well, for some reason a lotta people try to keep up with the Jones when it comes to downloading new Hip-Hop music. That new Jeezy song just dropped, you preview it, and you kinda thought it was okay. Why download it? So you can listen to it later and say it’s still average. You probably should pass. This only slows you up from listening to other music you may like.

Are you gonna get the full album/mixtape later?
If a mixtape you’ve been waiting for drops on Monday but five tracks leak on Sunday night, you might as wait for the whole thing. It keeps down on duplicates tracks too. Unless it’s some straight fire that you gotta have, you may save time getting the full project on Monday.

Don’t let big names collaborations fool you.
A new track has leaked featuring verses from all XXL Freshman from both years, Drake singing the hook, 2Pac vocals on the intro, and Jesus Christ doing the beat. But it SUCKS! Listen to it, but do you really need it in you library? I mean, other than having a track by Jesus Christ.

Get rid of radio rips and tagged tracks.
Hey, we ALL downloaded these kind. But did you remember to switch them out when the real thing became available? Unless you like a million drops of a website you not gonna remember anyway. Or a DJ yelling how’s he the best in the business over the lyric you can’t quite make out.

Make sure you listen to what you download.
I remember I had a spell where I had amassed close to 1,000 tracks of unheard music on my laptop. What the fuck? No, nappyafro doesn’t get that much music sent in the inbox. It’s just from me not taking the time to listen to what I downloaded (And probably could have used more tips in this article).

So that’s it. Thank you if you took the time reading this. I know it was random and straddled the line of “Who gives fuck?” territory. But it came to me and I just put the pen to the pad fingers to the keys. I’m now off to clean out my iPod of unwanted music.

Sidenote: The art for this article was rehashed for something I did for H20’s How To Save Hip-Hop.