How To Save Hip-Hop 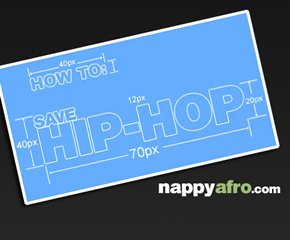 It seems like you can’t start a conversation about Hip-Hop without talking about one of the following: the latest hot single on the radio, Auto-Tune, and whether or not Hip-Hop is dead. Well, I’ve compiled a list of five things that we, the listeners, can do in order to save Hip-Hop.

1. Appreciate The New School
I’m not gonna lie, I’ve trashed both Soulja Boy and Bow Wow. I think both of them are cutting themselves short of their true potential. But I’d be lying if I said I didn’t blast “Turn my Swag On” and “You Can Get It All”. And I have done the “Soulja Boy” dance. The point here is, the new talent that we’ve been getting is different in their own ways and we should embrace them. Not every song that Soulja Boy makes is garbage (Well, I guess that’s everyone’s personal opinion) and we should say: “Hey, he reallly did it here” when he does. Beyond that, we’ve also got a lot of new faces in the game, like Drake, Asher Roth, B.o.B., Wale, Mickey Factz, J. Cole, Saigon, etc. All of these artists bring something new to the game and it’s up to us to listen to their music with a open mind; not being so critical of them.

2. Buy The Records
You can’t expect rappers to function without sales. We’ve gotta stop downloading the album and not buying it. I mean, you don’t have to buy EVERY record but if you do download an album and you like it, buy it. If your favorite rapper drops an album and you want it, buy it. That’s why everyone was so surprised when Rick Ross only sold 160k in his first week. His album was hyped and everything, but we as a community have to buy these albums in order for Hip-Hop to be successful. Rick Ross’ album was good and it should have sold at least 300k in the first week to be completely honest that’s how hyped up it was. But because of the increasing downloading, no one actually went out to buy it. Look at the Weezy fanatics: Tha Carter III leaked almost 2 weeks before it dropped and STILL sold a million in the first week. Hip-Hop artists need fans like that.

3. Stop Comparing The Legends
2Pac and B.I.G. were two of the greatest to ever do it. But they’re dead now and they ain’t coming back. Ever. Even 2Pac’s new content sounds bad in the shadow of his earlier music. We need to move on from that. I’m not saying stop listening to 2Pac’s songs but at the same time stop taking someone like, say, Drake, and comparing him to 2Pac. “Drake’s wack, he’s got nothing on 2Pac”. That’s because he isn’t 2Pac! Just because he’s not as good as 2Pac doesn’t mean he’s bad. That’s like saying “A-Rod sucks, he’s got nothing on Babe Ruth.” If you like the man’s music it shouldn’t matter. You can still have your top 5 lists and your personal G.O.A.T., but if you like an artist that’s all that should matter, not whether or not they are better than a legend.

4. Stop Blaming The South
The South has been blamed for the quality of music that has been put out, but if anything, the South saved Hip-Hop. When rappers were in limbo, a bunch of rappers from the south held it down. T.I., Jeezy, Weezy, Lil’ Jon, Ludacris, Outkast, Khaled and his entourage, hell, even T-Pain! They came up out of nowhere, started dropping hot singles in the game and making all this money. The South and the Midwest have been holding the game down more than anywhere. The East? What was the biggest record from the east before Jadakiss? American Gangster 2 years ago! And the West is basically composed of four rappers: Snoop, who’s still barely hanging on, The Game, Ice Cube past his prime, and Dr. Dre, who may never release Detox. The South deserves credit for stepping up, so stop blaming them for Hip-hop’s condition.

5. Welcome Change And New Ideas
I ain’t gonna front, if you’ve seen my comments in the forums you know I hate Kid Cudi. It’s just too different. At the same time we should accept and welcome changes like the ones he’s made. How many different genres/types of rock music are there? You can’t name them all can you? That’s because there were so many different artists out there redefining what you could and couldn’t do in rock music, and that’s exactly what we need in Hip-Hop. Artists like Kid Cudi, Charles Hamilton, and B.o.B. along with albums like 808’s & Heartbreak, help to broaden the scope of Hip-Hop, and it allows people of all ages and musical tastes to join the community.