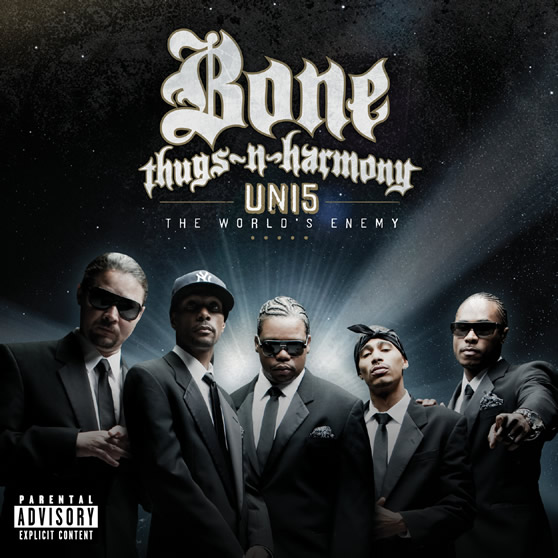 When artists first arrive in the industry, longevity among other things is high on the priority list. At almost 20 years in the game, Bone Thugs-N-Harmony have maintained their position longer than most artists can hope to. This tenure has seen BTNH grow from the guidance of the late Eazy-E to deliver eight studio albums, including their classic E. 1999 Eternal. Now on the verge of 20 years deep, Bone Thugs-N-Harmony release their eighth album entitled Uni5: The World’s Enemy, which sees the group’s five members reuniting.

Let’s get one thing clear right from the start… this isn’t E. 1999 Eternal, and nor should fans expect it to be. Those days are well behind BTNH, but the unique style they entered the game with is still present and strong. You can take the first song “Rebirth” (which makes me think of Flo Rida for some reason… I think it’s the beat/chorus) for evidence that the group has recognized the imitators over the years that have tried to mimic their style and flow. When it comes down to it though, there’s not another group or artist that could ever incorporate rapid-fire flow and melodic harmonies better than Bone Thugs-N-Harmony.

Uplifting, introspective tracks have been one of BTNH’s mainstays since they released “Tha Crossroads” in ’96, and they continue with that formula on this album with “See Me Shine” and “Meet Me In The Sky” (both of which happen to be album singles). While the former shines from Lyfe Jennings’ featured vocals, the latter steals the show coming off in the same vein as their ’96 single. K-Young delivers a superb hook backed by some excellent piano driven production as the Bone brothers keep the final destination beyond the clouds.

BTNH utilize a more relaxed feel on “Pay What They Owe” that never teeters close to boring because of the song’s content and tranquil production value. The same can’t be said for weaker tracks on the album like “My Life” and “Everytime”, which both suffer from horrible choruses and average beats. Not to say they don’t recognize the importance of commercial radio for today’s music, “Gone” (featuring Ricco Barrino – Fantasia’s brother) and “Wanna Be” sound like the group’s best attempts at that platform with this album.

While there are some other minor bright spots with “Universe” and “Only God Can Judge Me”, the three unnecessary skits bring down the value of this album. Though the title of this album makes reference to the group reuniting following Bizzy’s return and Flesh-n-Bone’s release from prison, the album fails to hold the same concept. While there is a unified sound on most tracks and an encouraging message is maintained throughout, the album plays through as dull and lackluster at times.

Bottom Line:
The album is a welcomed return for fans that have supported Bone Thugs-N-Harmony through all of the group’s troubles, but it’s not one that will garner a large number of new listeners in its release. It’s good to see a group like BTNH back stable and still releasing albums after almost 20 years in the game, but this album highlights their faded position in a new generation of music. Diehard fans enjoy! New fans… go pick up E. 1999 Eternal and get this album’s choice cuts.