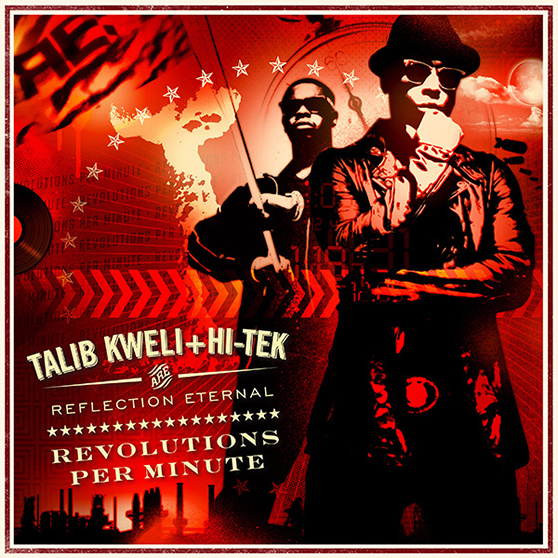 Roughly ten years since the release of their debut album Train Of Thought, Reflection Eternal return to the scene with their latest offering entitled Revolutions Per Minute. When you examine a group like Reflection Eternal you come to understand just how rare of an entity they are in present day Hip-Hop/Rap music. Following in the footsteps of past duos like Eric B. & Rakim, Gang Starr and Pete Rock & C.L. Smooth, Reflection Eternal is built off the one emcee/one producer format that isn’t as prevalent nowadays as it was back in the 80’s and 90’s. On one side of the spectrum you have Brooklyn native emcee Talib Kweli, considered by many (including Jay-Z) to be one of the most lyrical emcees in the game with three solo albums (Quality, The Beautiful Struggle, Eardrum) under his belt. Opposite him you have Cincinnati bred DJ/producer Hi-Tek who along with being a staff producer on Dr. Dre’s Aftermath record label has provided production for the likes of 50 Cent/G-Unit, Snoop Dogg, Common, Mos Def, The Game, and more. Together they make up Reflection Eternal, a group apart of the social conscious rap movement that took the industry by storm in the mid-to-late 90’s along with artists like Mos Def, Common, Dead Prez, etc. As we have seen with previous releases from artists that have taken extended periods of years between albums (i.e. Raekwon’s Only Built For Cuban Linx… Pt. II, Inspectah Deck’s Manifesto), the biggest challenge to overcome is the “bounce back” to sound relevant years later. Fans have been patiently waiting for a follow-up album from the Reflection Eternal duo and now that the time has finally arrived ten years later was it worth the wait…

1. RPM’s
Produced by Hi-Tek
From the jump we get a simple introduction track, which basically has an announcer describing and explaining the concept behind the Revolutions Per Minute album title over a laid back beat from Hi-Tek. Nothing more and nothing less to this track other than its purpose of preparing the listener for the rest of the album.

2. City Playgrounds
Produced by Hi-Tek
The first full song we hear from the duo that features some slow tempo production with a dark vibe that serves as the backdrop for Talib to drop some rhymes in signature fashion. Even though Kweli holds up his end lyrically, I can’t say the same about Hi-Tek production wise as the beat sounds dull and doesn’t do much to enhance the track. This track feels to sluggish to be starting off the album when it’s ideal to catch the listener’s attention for the remaining tracks.

3. Back Again
Featuring Res; Produced by Hi-Tek
This was the “return record” for the group as the promotional single for the album released almost a year prior to the album’s release. This song undoubtedly put smiles on the faces of fans, as it was the first music of any kind heard from the group since their debut album (other than compilations and features) solidifying the return as legitimate. Rightfully so the song doesn’t disappoint in any aspects as Hi-Tek produces an ecstatic sounding beat backed by ethnic drums that sit comfortably with Kweli’s lyrics and the chorus sung by Res. This feels more like how an album should start off, a lot better than the previous track. (Check out the music video here)

4. Strangers (Paranoid)
Featuring Bun B; Produced by Hi-Tek
The forth album single is a strong effort that sees Hi-Tek’s mysterious/suspenseful production match the song’s theme of paranoia as Talib speaks on various issues and political matters like health care. While he holds his own it’s underground king Bun B that takes over the track with his trademark flow and delivery that’s just can’t be matched when he’s in his zone. (Check out the music video here)

5. In This World
Produced by Hi-Tek
This track comes in as the third album single (“first official single”) and one of the strongest tracks on the album. Hi-Tek produces a slow pacing beat that fits nicely with Kweli’s rhymes as he speaks about his street surroundings, the recession climate, and braggadocio lines regarding his emcee status. In his last verse he talks about his hustle and hard work as encouragement to African-American males to show some initiative. (Check out the music video here)

6. Got Work
Produced by Hi-Tek
On this song Kweli proceeds to tell a symbolic story of the ills of fame and the things that it causes those have it to do to maintain it. In some ways this song reminds me of Jay-Z’s “I Know” off American Gangster in how he speaks about fame in the third person and people’s addiction to it. The subtle beat provided by Hi-Tek is a suitable addition to the track but it’s nothing too spectacular.

7. Midnight Hour
Featuring Estelle; Produced by Hi-Tek
This happens to be the fifth single for the album and rightfully so it’s probably the closest thing to a commercial offering we get from the duo on this album. Hi-Tek’s bouncy production for the track has a similar feel to something you might have heard Amy Winehouse on during her Back To Black days. As you can assume from the song’s title, this track deals with the late night hours of Talib and his special lady. The addition of Estelle to this track definitely gives it more feeling that even the ladies will enjoy. The Russell Simmons skit that follows the track is pretty funny (is that you Affion??). (Check out the music video here)

8. Lifting Off
Produced by Hi-Tek
With this track Reflection Eternal gets back to their Train Of Thought days with some smooth production from Hi-Tek as Talib rhymes about the various methods of getting lifted both mentally and spiritually. I’m sure those that indulge will find this track very suitable and fitting for said activity, as well as those just chillin’ while listening to the album.

9. In The Red
Produced by Hi-Tek
Not really too impressed with this track as it sounds kind of boring throughout. Talib spits about various music legends like Michael Jackson and James Brown in connection with the ills of the music industry regarding their careers. Even though a message is being presented in the lyrics it doesn’t stick with the listeners over an average beat from Hi-Tek. This is an example of where a song’s intentions are good but the results don’t match the vision.

10. Black Gold Intro
Produced by Hi-Tek
Basically just a skit that serves as a transition into the next track. Pete Rock also used it on the track “Pete Intro” on his NY’s Finest album.

11. Ballad Of The Black Gold
Produced by Hi-Tek
In light of the recent oil disaster this track couldn’t have come at a better time. Backed by some military-styled drums Talib proceeds to speak about the various issues and history regarding oil in our country. It’s evident that he did his history for this track as his lyrics dig deep in covering much ground on the topic. The beat from Hi-Tek is a very nice complement to the song.

12. Just Begun
Featuring Jay Electronica, J. Cole & Mos Def; Produced by Hi-Tek
Probably my favorite track on the album ever since I first heard it a couple months ago. This would be deemed the “posse cut” of the album with has all four emcees dropping incredible verses over a fantastic beat from Tekzilla. Picking the best verse on this song would be a challenging task as each artist sounds like they’re trying to outdo the rest in friendly competition. My pick would be between Jay Electronic and J. Cole as one drops a verse with intelligent delivery while the other does damage with heavy metaphors.

13. Long Hot Summer
Produced by Hi-Tek
Once again we get a slow pacing beat from Hi-Tek as Kweli describes in detail a lady that has his attention and their summer endeavors. This isn’t necessarily a bad track but Talib has done tracks of similar topic before with better results. More than the rhymes it’s the production value that holds this track back from achieving more.

14. Get Loose
Featuring Chester French; Produced by Hi-Tek
This track happens to be somewhat in the same vein as the previously heard “Midnight Hour” as Tek provides some lively production as TK delivers some boastful and playful rhymes that coincide with the song’s subject matter. Chester French adds some suitable vocals for the chorus, but it doesn’t exactly improve the track.

15. So Good
Produced by Hi-Tek
Not exactly the most intriguing track you’ll find on the album as the synth-heavy beat from Hi-Tek leaves much to be desired from a producer of his caliber. Like their classic song “The Blast”, both emcee and producer drop a verse but neither really capture the listener’s attention beyond their average verses.

16. Ends
Featuring Bilal; Produced by Hi-Tek
Money is the topic at hand for Kweli on this track as he covers multiple aspects including greed and poverty. With the country in tough economic times his thoughts on funds and the power it has on people is on point along with Hi-Tek’s casual beat. Bilal solidifies the chorus like he usually does whenever he’s booked for hook duty.

17. My Life (Outro)
Produced by Hi-Tek
Arriving at the final track of the album the duo ends things off in similar fashion to how they started. Another relaxed beat serves as the backdrop for Talib’s narrative lyrics detailing the trials and tribulations of a man’s life. This track serves as a fitting close for the album that comes full circle so to speak.

Bottom Line:
So after 17 tracks does Revolutions Per Minute live up to the anticipation built from a 10-year hiatus… I would say that it does in some aspects but doesn’t achieve the same results as their classic debut album. Lyrically not much has changed as Talib Kweli still possesses the same lyrical prowess heard on Train Of Thought, but the production value from Hi-Tek has taken a hit over the years and doesn’t really have the same impact it once had. One of the strongest characteristics of their debut album was the cohesive, unified sound heard throughout the entire project very much attributed to the emcee/producer structure. Sadly that same unified feel is missing from this album as its flow feels like a rollercoaster with various highs and lows throughout. Many of the album’s highs come in the form of the singles and lyrically strong cuts while the lows come mostly from subpar production contributions from Hi-Tek. More than anything it’s the production value that keeps this album from being better than it is, which might have resulted from the extended layoff of the duo and the focus on their solo careers. Besides select low points, they aren’t enough of them to keep this album from being listenable and enjoyed by fans and listeners seeking an alternative to the Hip-Hop/Rap dominating the charts and radio.

nappyPicks: “Just Begun”, “In This World”, “Strangers (Paranoid)”, “Back Again”, “The Ballad Of The Black Gold”