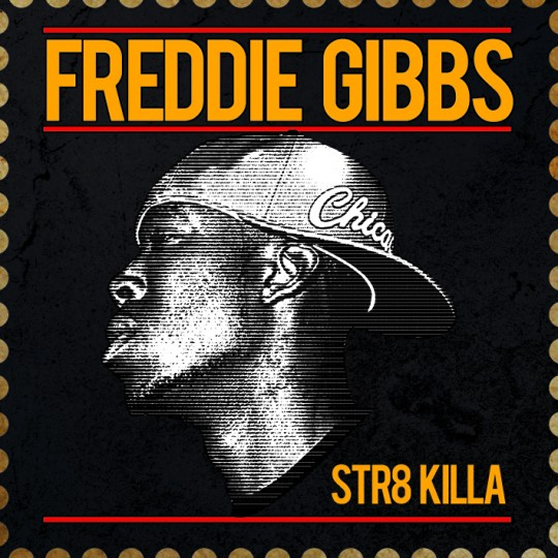 The Midwest has done it’s best to put it’s stamp on Hip-Hop. From my hometown’s own Nelly, Detroit’s Eminem (can we STOP calling Detroit the Midwest, they north as hell), and over to Chicago who’s place is now certified, each city has offered up some memorable moments. Enter Gary, Indiana. Now, yeah, we know about the Jacksons but what do they have to offer Hip-Hop? Freddie Gibbs let’s us know that Gary isn’t all about cute kids singing songs and learning dance steps. From the two previous mixtapes, we’ve come to know Gary…is just like Compton. It’s a tough city where ganglife is more at home than the city name would have you think. While Drake and J. Cole are courting the mainstream Hip-Hop audience, Gibbs is hittin’ it when they ain’t home…they better be careful, Gibbs just may steal their girl.

1. Str8 Killa No Filla
Featuring Big Kill; Produced by Block Bettaz
In typical Gibbs fashion, we get right to the music with some uptempo music and double time flow mixed in with nothing less than gangster lyrics. One of Gibbs hallmarks is his ability to change up his flow mid song, this song is a great example of that. Block Bettaz live up to the name with this song.

2. Rep 2 Tha Fullest
Featuring Jay Rock; Produced by DJ Burn One & B-Flat Trax
Keys introduce this song quite nicely, and once the beat drops, you feel like you are listening to a vet in the game. The production on this song is very well done and layered. Freddie flows perfect with the beat and Jay Rock offers up a flow that is a little hard to catch, but he’s spitting the same grit that Freddy does so it works well on this track.

3. National Anthem (Fuck The World)
Produced by L.A. Riot Music (Josh The Goon & Speakerbomb)
It seems like Gibbs has really started to acclimate to the West Coast musically. This track sounds like some old MC Eiht music, and that is a good thing. I typically dig his mix of fast/slow delivery but this execution is a little off to me. With the chorus, I love the sentiment but hate the execution and the same can be said for the hook. The “singing” on the hook, the whistle, it’s all hard to listen to. You can appreciate the first verse better as it becomes apparent that the sped up flow is intentional and is copied on the following verse, but it still just doesn’t go well with the tempo of the track.

4. The Coldest
Featuring B.J The Chicago Kid; Produced by Kno
The thing about being from the Midwest is that you get music from everywhere. You get the bangers from the east, the musical influence of the west, and the methodical nature of the south. This song has a southern, Ball & MJG type feel to it. The Chicago Kid offers up the vocals on the hook and bridge on this song while Gary Indiana’s favorite rapper delivers some of his usual dopeness.

“I can’t teach you how to dougie but I can teach you how bout this thuggin’ / Keepin’ it thurl(thorough) / keep ya mouth closed nigga / keep it 1hunnid / keep yo hand up out my gotdamn pocket and keep it pushin / keep the reefer / keep the white, keep it soft or just keep it cookin / but keep in mind that any given day you can die for this / as I bag this dope I pray that one day I can just / make an honest piece of change / prolly change the way I live / MJ fadeaway, I’m somethin’ niggas can’t defend.”

5. Personal OG
Produced by Block Bettaz
This is another song that I think would sound better if Freddie used his slower flow to go with the beat, but the song is still dope. This song is for the smokers, as Gibbs states himself on the chorus. There isn’t much else to say about this one, you gotta hear it to enjoy it.

6. Live By the Game
Produced by Block Bettaz
These Block Bettaz cats are pretty damn talented. They seem decidedly southern outside of that intro track and all of it is well done. The title says it all for this one, it’s a story about being stuck in the lifestyle that basically lives you, you don’t live it.

7. Rock Bottom
Featuring Bun B; Produced by Beatnick & K-Slaam
Song 7 continues in the southern influenced sound of the album and offers a nice backdrop for the story telling ability of our GI’s very own. One of the things that really hits home for me on this song is that hearing Gibbs alongside of Bun B makes you realize how much he sounds like him.

8. Oil Money
Featuring Chuck Inglish, Chip the Ripper, Bun B, & Dan Auerbach; Produced by Blended Babies
The church organ is a decent touch, the singing intro damn near made me press stop. I’m glad I listened on though. Typically, when I see a song with this many features (and so many of them not in popular circulation) I get a bit wary. This song is fly as each rapper manages to put his own stamp on the song and make the beat their own. Now, of course Bun B is so distinguishable that he stands out on this one but not because the others are bad verses.

Bottom Line:
Gibbs is one of those guys that I hope can keep finding ways to do what he does. We’ve heard 50-11 songs from him now about the street life and the gritty images that go with it, but somehow, he manages to keep them fresh time and time again. With stories that vary from the fight to stay in the game to the fight to get out the game, for him, progress is the way he tells the story and not in changing the story.

On his previous offerings, there was a much more Tupac sounding influence to his music as well as a much more diverse feel to the mixtapes he dropped. This offering, like I’ve stated, has a much more southern feel to it musically, and a flow that intends to keep you off guard going from slow to fast mid-bar. I don’t think this is as good as his previous two mixtapes and yeah, 8 tracks is crazy short, but this is still a good effort and worth supporting.