Reasons You Need To Support Dondria vs. Phatfffat 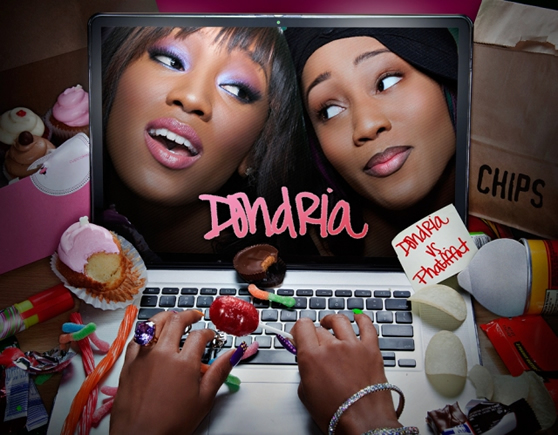 In this economy, it’s hard to justify going out and buying albums, especially debut albums. I’d like to quell your fears and trepidation about buying Dondria vs. Phatfffat. Here are the top 5 reasons I think you need to support this album and artist.

1. The Business Model
I don’t know of many success stories in the music industry that start with YouTube. Sure, there are stories, but not many. Dondria’s story is significant because it has it’s roots in humility. She started her channel just messing around and singing because she liked to sing. She would sing requests and was sincerely enjoying herself. JD came across her page and millions of views, and took a chance on her. He put her up, worked her publicity even more with the Living The Life channel on YouTube which granted Dondria’s fans some behind scenes views of her as a singer on the scene. 2 years later, the album has finally dropped. For all of you that grind making mixtapes, trying to figure out how to make it happen, you need to support this album and make label execs take notice that this CAN happen so they need to take a chance.

2. The Effort
This album is 2 years in the making. JD didn’t just throw some features on the album and grab some big name producers and expect the album to sell itself. He put the muscle behind marketing her fully. She dropped a mixtape, did 106 & Park, performed on the road and probably did an interview at your local radio station. He’s fully had her on the road and didn’t sit back and expect it to sell itself.

3. The Talent
Let’s be candid fro’nation…how many artists can you think of that have NO talent that are successful in the game? That’s exactly the reason you should support this album. This isn’t a auto-tuned, vocoder, lip synch, studio songstress that relies on smoke and mirrors to cut albums, she can flat out sing.

4. The Image
We’ve heard the cries and complaints about an hyper-sexual industry that thrives on tits and ass and cares little about content. Dondria’s image isn’t a work, she’s just a good girl. You can see her candidly on YouTube being herself, and nothing has been done in her marketing to make her expose more or be the industry “vixen” that other artists become as soon as they get a deal. Don’t get me wrong, this isn’t a gospel album, but it is a real album that gives a more positive image to young girls in an era where we hear songs like “Sponsor” and “Rims Make My Pussy Wet”. No, I didn’t make that last song up.

5. It’s Good Music
This is probably the most important one right? I won’t pretend that this is a “manly” album, but it is a good album. Guys should be able to find a few songs on here that they can enjoy such as “Shorty Wus Up” and “Making Love” which are still well done songs. This album is definitely going to appeal more to the young ladies out there and I’d be shocked that due to promotion and quality, if this album doesn’t sell most of the 100k that they shipped on Tuesday. It’s a great album for the niece, little sister, daughter, or any young lady in your life and even for the moments when you are just relaxing and want to be serenaded by an up and coming singer in the game.