Six Degrees Of Bun B (The Game)

If you ever visited our forums, you’ve probably seen Verbose playing various games with other forum members (“Did I Date Them?”, “Name That Backside!”, etc.). Well recently he took the game “Six Degrees Of Kevin Bacon” and transformed it into “Six Degrees Of Bun B”.

Why choose Bun B? Who doesn’t fuck with Bun? Bun B For President!

If  you’ve played “Six Degrees Of Kevin Bacon”, you basically already know how to play this game. But for those who don’t know what I’m talking about here’s the rules: 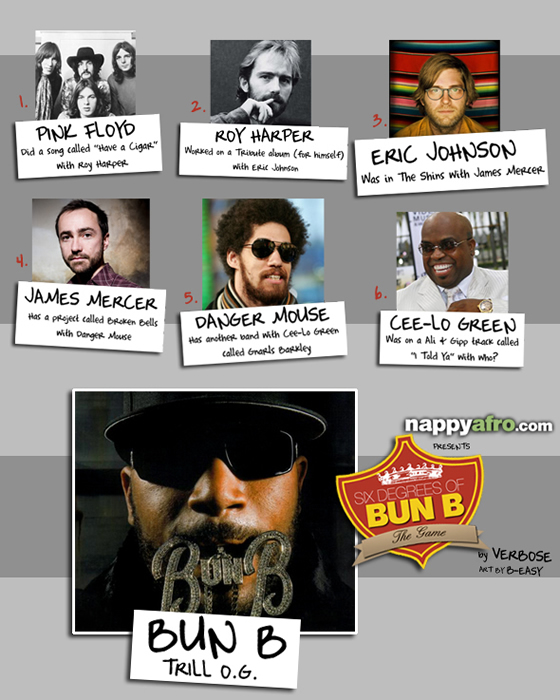 Other examples from the forums:

I (B-Easy) did Dolly Parton:

1. Dolly Parton wrote and sang “I Will Always Love You” which was later remade by Whitney Houston
2. Whitney Houston was married to Bobby Brown
3. Bobby Brown did “Thug Lovin'” with Ja Rule
4. Ja Rule did numerous songs with Jay-Z (“Can I Get A…”, Murdergram”, etc)
5. Jay-Z did “Big Pimpin'” & “Get Throwed” with Bun B

Update: Shout out to Bun B (Of course) for the tweet:

So what do you think? Comment below or better yet:
GO PLAY IN THE FORUMS!