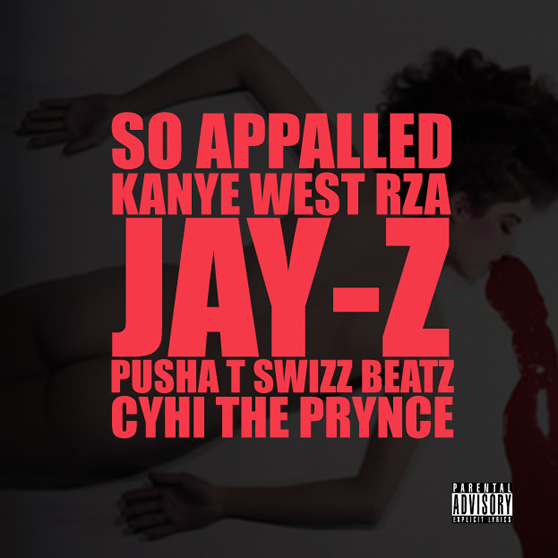 People have been waiting on the full version of “So Appalled” since last year. Who knew that the original version would have verses from Jay-Z, Pusha T, & Cyhi The Prince (RZA & Swizzy just provide some ad-libs and a hook)? Ye’s original (and ridiculous) verse is still here but it also seems like they either redid or added to the beat. I’m really happy to see Cyhi here not only because he’s a talented rapper, but because after he signed to G.O.O.D. Music I didn’t hear much from him. Speaking of new G.O.O.D. Music signees, ever since Pusha T linked up Kanye he’s definitely has stepped up his profile. Both Pusha & Cyhi turn in great verses. Don’t ask me why RZA & Swizz are even on the track.

And then we have Jay-Z’s verse:

How should I begin this?
I’m just so offended
How am I even mentioned by all these fucking beginners
I’m so appalled
I might buy the mall
Just to show niggas how much more I have in store
I’m fresher than you are
So I don’t have to pause
All of y’all can suck my ball through my draws
Dark Knight feeling
Die and be a hero
Or live long enough to see yourself become a villain
Went from the favorite
To the most hated
Would you rather be underpaid or overrated?
Moral victories is for minor league coaches
And Ye already told you we major you cockroaches
Show me where the boats is
Ferrari Testarossa’s
And Hammer went broke so you know I more focused
I lost 30 mil so I spent another 30
Can unlike Hammer 30 million can’t hurt me
Fucking insane
The fuck am I saying?
Not only am I fly
I’m fucking not playing
All these little bitches too big for their britches
Burning they little bridges
Fucking ridiculous