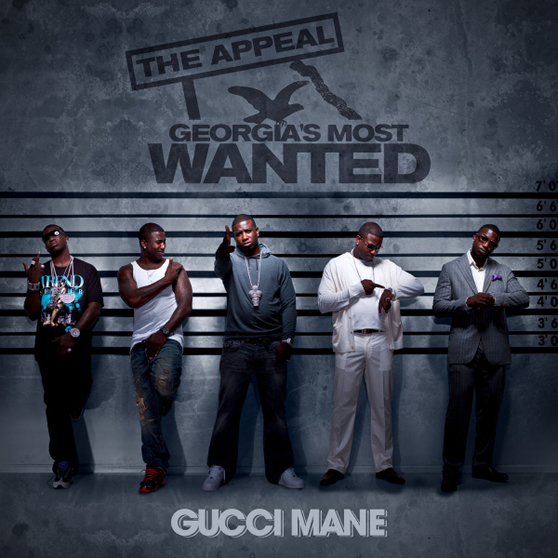 I don’t think there is another rapper in the game that has the kind of success that Gucci Mane has had while staying STREET. Radric Davis aka Gucci Mane has been a draw in Hip-Hop for the last 2 years and no one knows why or how, but Gucci Mane has been all over the place with cameos and a plethora of well marketed mixtapes. Things have changed since he dropped his first album Trap House, when anything sold was a win. Now Gucci is EXPECTED to do numbers. Can he pull that off with The Appeal: Georgia’s Most Wanted? I can’t wait to see how Gucci’s fanbase take this album, are they going to appreciate the growth of his music? Let’s see!

Little Friend
Featuring Bun- B; Produced by Darkchild
Gucci starts the album out with a song dedicated to his infatuation of Scarface. I can’t be mad at Gooch for this one, because this beat is STOOPID! How can you not go dumb over this one? I did notice that Bun-B’s voice sounded funny, was that just me?

Trap Talk
Produced by Drumma Boy
Gucci doesn’t waste time taking us to the trap house on the album. Gucci knows what his fans want to hear and he gives them a dose of it on this song. Is it me or does Drumma Boy need to take a break? He needs to reinvent himself. Don’t get me wrong, the song is still HOT!

Missing
Featuring Sig H.B; Produced by Zaytoven
First song by Zaytoven; him and Gucci still has that good chemistry that we have known to look for when the two hook up. This is the song that the ladies will like. It’s still HOOD, but it has that club feel to it.

What It’s Gonna Be
Produced by Drumma Boy
Gucci sticks to the script on this song and keeps up with the “Swag Rap” on this one and puts together a pretty dope song. Looks like Gucci shows that he can switch it up and rap to a faster tempo. I see you out there Gucci! I see that Drumma Boy redeemed himself on this track.

Making Love To The Money
Produced by Schife & OhZee
This might be the trapper anthem for 2010! Don’t be surprised if you hear this next time you go to your dealer’s house to cop! (Not advocating that at all….just saying) If you love money…you will love this song right here, and by the sound of it Gucci loves MONEY!

Gucci Time
Featuring Swizz Beatz; Produced by Swizz Beatz & The Individualz
When you get a track produced by Swizzy you know what you get. Something that will get you hype and have you on some sing-a-long type stuff. On this one the beat is crazy and hood at the same time. The chant “cut the lights on, cut these fucking lights on, all this fuckin ice ain’t no need to cut these lights on”. This one has single written all over it.

Party Animal
Produced by FATBOI
Gucci gives the club goers another anthem with this one. I can see the college going demographic of Gucci listeners going HAM to this one. FATBOI is becoming one of the go to producers in the South. I’m sure the success he saw off of “Wasted” made him make this song.

Remember When
Featuring Ray J; Produced by B. Wheezy
This is the first song that I will have to pass on. This shit is terrible. SKIP.

Haterade
Featuring Nicki Minaj & Pharrell; Produced by The Neptunes
I was kind of confused when I saw the pairing and heard the production. But after listening to the song, it worked PRETTY GOOD. I didn’t think it was going to work, but Skateboard P made it work for me with the hook. Nicki continues to drop some DOPE verses and Gucci didn’t get swallowed up in the process.

It’s Alive
Featuring Swizz Beatz; Produced by Swizz Beatz & Rob Holladay
They must have had some good times together because Swizz and Gucci hooked up again on this one. This one isn’t as high energy as the last one, but it still will have your head bobbing. This is another aimed for the clubs, but even a man going through a mid life crisis will like this one.

ODog
Featuring Wyclef Jean; Produced by The Inkredibles
Wyclef wondered why he couldn’t be President of Haiti…you have a song with Gucci Mane in the middle of you trying to get on the ballot! But with that all aside, this song is DOPE! The production by The Inkredibles is off the chain. I wonder who approached who with the collabo idea. It worked out in the end.

Dollar Sign
Produced by J.U.S.T.I.C.E League
I was looking for something a little better from J.U.S.T.I.C.E League on this track, because this sounds like something they could have made in 15 minutes. The jury is still out on this one. I will let you guys decide. The hook is hilarious though: “I’m so fucking paid, I just bought the dollar sign!”

Brand New
Produced by Zaytoven
Zaytiggy and Gucci hook up again, and this time it’s not that good. Anytime you say “cowabunga dude” in a rhyme I CAN’T GIVE YOU A PASS! I know its “Swag Rap” but I still can’t nod my head to this.

Weirdo
Produced by Drumma Boy
After a couple of so-so songs, Gucci comes back extra HARD on this one. I can get with this one! It’s funny and entertaining at the same time. Weirdo? Really? I can say that Gucci pushed the envelope with this song. “Swag Rap” worked on this track!

Grown Man
Featuring Estelle; Produced by Jim Jonsin
The last song features ESTELLE! Yeah, don’t adjust your eyes! Gucci ends his album on a lighter note and makes the industry standard last song. I really don’t like the singing, not that it isn’t good, but it just doesn’t seem like its Gucci’s song. Jim Jonsin keeps selling the same beats over and over again. I swear I have heard this beat before!

Bottom Line
Gucci isn’t the most lyrical rapper out there but we already knew this. He makes no bones about what he likes to do. He likes women, weed, cars, clubs, getting wasted, and showing off jewels. Gucci doesn’t get into the economy, he doesn’t talk about saving the hood, he’s not trying to be a role model, and he is not going to change the way he approaches the game. Gucci knows his fans and while he is expanding his base, he is not forgetting to make the music they like. Say what you want to about Gucci, but the man is one of the few artists that give their fans the type of music they want to hear. Gucci has found a way to balance the streets with the mainstream. Whatever he is doing he should keep it up cause he stays winning.