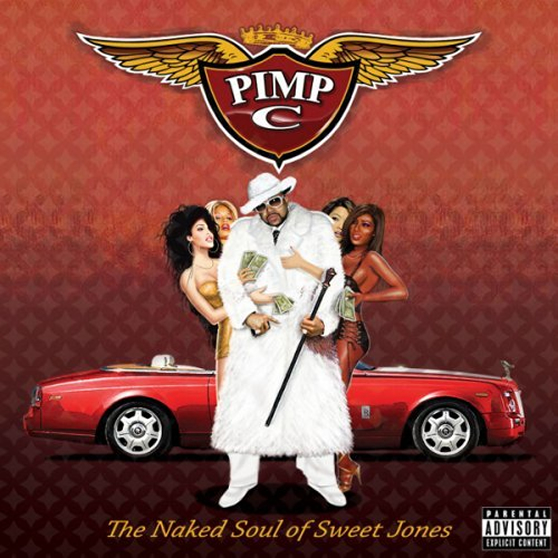 It doesn’t seem like it, but Chad “Pimp C” Butler has been gone almost 3 years. He will always be remembered for being half of the legendary Southern group UGK, but Pimp was more than just half of the group, he was the in house producer. The Naked Soul Of Sweet Jones is Pimp C’s first “official” solo album (Says the Pimp himself) and his final album. This album was conceptualized by his partner in rhyme Bun B, and was put together the way that Pimp C would wanted it to be. We all know that some projects that are done after an artist has passed come out sloppy, let’s see how this project sounds.

Down 4 Mine
Produced by Cory Mo
First thing that hits you is that Texas beat on this one. Pimp comes out the gate with his usual game spitting. If you never have been to Texas, this song takes you there on a lyrical journey. Pimp C gets his “Drake” on with some singing on this one, and it works!

What Up?
Featuring Drake & Bun B; Produced by Boi-1da & DJ B-Do
For some reason I don’t think that Pimp C would have done a song with Drake, but since the Pimp isn’t around, I guess Drizzy got in on the project. The song is HOT, and Boi-1da did a good job reproducing the track.

Love 2 Ball
Featuring Chamillionaire; Produced by Steve Below
Three songs in and it doesn’t feel like one of those posthumous albums. This beat sounds like one that Pimp would rap on, the verse seems like it was cut short but it stills GO HARD. Chamillionaire actually kept my attention while he was rapping.

Fly Lady
Featuring & Produced by Jazze Pha
One thing about a Jazze Pha beat is that you can tell it’s his by the time it comes on. If one producer needs to revamp their style it’s him. This is your standard UGK song minus Bun B.

Since The 90’s
Featuring The Gator Main & E-40; Produced by Big E
This song makes me think he is talking about Jeezy, but I may be wrong. I don’t know why they included the other two on this song, because I feel that Pimp could have done this one by himself.

Dickies
Featuring Bun B & Young Jeezy; Produced by DJ B-Do
Now this is an interesting combo, Jeezy and Pimp C on a song together. If you not from the South or the West, you might not know what Dickies are or know why they are so popular. After hearing this song, I’m left wondering what’s up with Jeezy’s voice. Has it always been like that? Hmmmmm.

Made 4 Me
Featuring Too Short; Produced by Big E & Mike Dean
If Too Short is on a track, best believe someone is rapping about pussy, someone is going to say beeyatch, and sex is going to be the main topic. Now that I have laid down the blueprints for this song, you know what it’s all about.

Midnight
Featuring Rick Ross & Slim Thug; Produced by David Banner
When I saw the lineup for this track I figured I was going to like the song, but after hearing it I felt like a NO HOMO was needed. I really don’t want to hear three dudes talking about fucking (especially two songs in a row). The beat was a little mellow coming from David Banner, but it went well with the trio.

Believe In Me
Featuring Ivory P., Cory Mo, Hezeleo, BankRoll Jones, Bub, & Da Underdawgz; Produced by Cory Mo
I’m digging the beat on this one, but I really don’t like all the extra cats rapping on this song. I guess this is one of the songs that you try to give your people some shine. NEWSFLASH: it didn’t work.

Hit The Parking Lot
Featuring Webbie & Lil’ Boosie; Produced by Mouse
Now this song here I can get with, especially because these two came in the game on UGK’s back. Whoever Mouse is…he did his THING on this track! I can’t lie and say I didn’t like Boosie’s verse on this one, because I did. This collaboration worked pretty well.

Colors
Featuring Da Underdawgz; Produced by DJ B-Do
Once again I liked the production, but I didn’t really care for the “other” guys rapping on the song. Not that they did a bad job, I just didn’t feel like they did the production any justice. Sounds like an H-Town version of Gucci’s “Lemonade”.

Go 2 War
Featuring Bun B & J-Dawg; Produced by Steve Below
The production is really keeping this album in rotation, and this one is no exception. I just wish the hook would have been better. The hook is lazy, but what can you do when the artist isn’t here anymore? Oh by the way, that J-Dawg character…not feeling that nigga at all.

Massacre
Produced by VMAN Productions
Pimp C ends this one on a DOPE note. He really goes in on someone. I would hate to be the one that Pimp has directed all this venom towards. You know how the Pimp be!

Bottom Line:
Even though Pimp C wasn’t around for this project, he is smiling at the way Bun put this together. No, the project isn’t perfect, but if you didn’t know any better you would think that Pimp produced a couple of these tracks. All in all if you are an UGK fan, this album will not disappoint. The only thing about this album that I would question would be some of the collaborations (Drake and Young Jeezy) but outside of that, this proved to be a solid album.