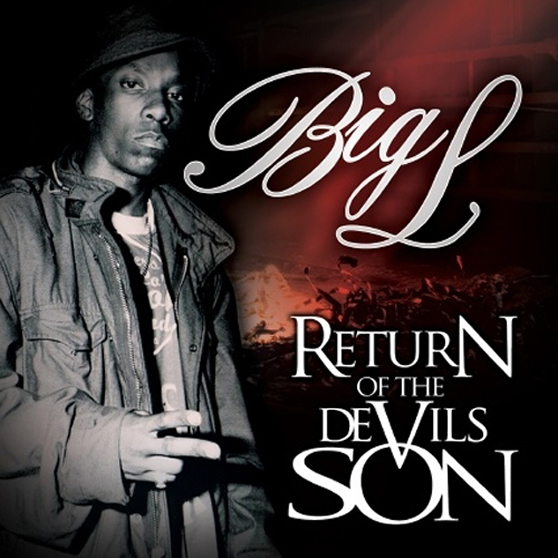 Anybody that knows me around these parts knows that I’m the biggest Big L fan you could find. Besides Jay-Z, Big L is my favorite rapper of all-time (save your comments and thoughts) and if you’re familiar with his music it’s obvious to understand why. As a skillful emcee that amazed listeners with his witty punchlines and masterful flow, Big L embodied and represented his Harlem hometown until his unfortunate demise on February 15, 1999. Following his debut album Livestylez Ov Da Poor And Dangerous (1996) and the follow-up The Big Picture (2000) we arrive at Return Of The Devil’s Son, a varying posthumous album from the late Harlem emcee.

Dedicated fans of Big L’s music like myself will ultimately conclude that this album isn’t for them after listening to the 21 tracks contained on the album’s track listing. That’s not to say that this album is bad by any means but dedicated fans will already have heard a majority of the tracks over the years from previous releases (Live From Amsterdam, The Achieves: 1996-2000, 139 And Lenox, Harlem’s Finest, & Freestyle History, Vol. I & II, In Memory Of… Vol. 2). Out of the 21 tracks, there are three “new/remixed” songs (“Zone Of Danger”, “Right To The Top”, “Once Again”) that can truly be labeled unreleased and never before heard. Unfortunately these tracks come up mediocre at best, as they are basically previously heard Big L lyrics over average production that doesn’t come close to the originals.

For the more casual Big L fan or completely new listener there are plenty of gems and rarities to be found on Return Of The Devil’s Son that may increase their appreciation and interest for him as an emcee. Examples of such songs include “Devil’s Son” (From Lifestylez), “I Should Have Used A Rubber”, “Yes You Can”, “If You Not Aware”, and “Power Moves”. The songs included span the course of Big L’s career from its early beginnings (“Principle Of The New School”, “Unexpected Flava”) all the way until the bitter end (“Slaying The Mic”, the last freestyle ever recorded before his death). These songs and freestyles properly display why Big L is considered by many to be one of the nicest emcees to ever grace the mic and how his influence has carried over to many rappers in the game today.

Bottom Line:
Even though Return Of The Devil’s Son contains many previously released songs, it’s good to see them released in official form as the album was executive produced by Big L’s brother Donald “Don” Phinazee. While there are plenty of unreleased tracks and freestyles to be heard on the album, I would have liked to see more material that was vital to L’s career like the “Yes You May (Remix)”, Stretch & Bobbito Show freestyles, and “American Dream” (w/ Children Of The Corn). As previously stated, this album will appeal more to new and casual listeners of Big L who might only be familiar with his more popular songs like “Put It On”, “M.V.P.” and “Ebonics” while dedicated fans will really find nothing to new or unheard with what’s offered. While Return Of The Devil’s Son is a good album that allows fans to dig deeper into the career of Big L, it’s recommended for new listeners to invest in Lifestylez Ov Da Poor And Dangerous and The Big Picture to really understand what made L such an impressive rapper and incredible loss to the Hip-Hop/Rap community during a time that was marred with rapper deaths. In the meantime dedicated fans like myself keep our fingers crossed that the rumored Big L posthumous album executive produced by Lord Finesse and DJ Premier eventually sees the light of day.