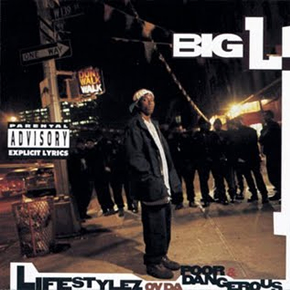 While going through my computer the other day and waiting for Skyzoo’s debut album The Salvation to be released next Tuesday, I came across a Rewind Review that I had started writing three months ago but never finished. The selected album was one of my personal top 5 albums of all-time and from one of my favorite emcee of all-time. Said album and artist was Lifestylez Ov Da Poor & Dangerous by legendary Harlem emcee Lamont Coleman b/k/a Big L. Released in 1995, this album stood as Big L’s debut album on Columbia Records. Released in the same year that other seminal Hip-Hop classics dropped like Only Built 4 Cuban Linx… (Raekwon), Liquid Swords (GZA), Return To The 36 Chambers: The Dirty Version (Ol’ Dirty Bastard), The Infamous (Mobb Deep), Me Against The World (2Pac), and E 1999 Eternal (Bone Thugs-N-Harmony), it’s no surprise as to how this album was widely overlooked and suffered sales wise. But numbers aside (L’s album actually did quite well in ’95 without much promotion, radio play and music videos for support) this album turned out to be a classic in its own right and throughout the Hip-Hop collective.

Other than his promotional Horrorcore record “Devil’s Son”, guest verses on fellow D.I.T.C. members Lord Finesse and Showbiz & A.G. albums (“Yes You May (Remix)”, “Represent”), and various radio freestyles (Stretch Armstrong & Bobbito Show), not many knew about the Harlem rapper named Big L outside of the underground Hip-Hop circuit, but that would soon change with the release of his debut album Lifestylez Ov Da Poor & Dangerous. Judging from the lyrics heard on his promo single “Devil’s Son” (“The Big L is strictly gun play/I run in church and pistol whip a priest every Sunday…I’m living up to my extortion image/I be stalkin’ Lenox, catching more bodies than abortion clinics“) it could be seen that L wasn’t your typical emcee and didn’t care that he didn’t fit the record labels’ definition of a “rapper”. Known for his aggressive style battle rhymes and mind-blowing metaphors, Big L put it all on display on his debut album for the world to hear. Two of the albums lead singles (“Put It On” and “M.V.P.” are dropped as the first two tracks you hear at the beginning of the album. On “Put It On” Buckwild provides L with rough yet smooth beat that allows him to rip the track with lines like (“Aiyo, you better flee hops or get your head flown three blocks/L keep rappers’ hearts pumpin’ like Reeboks…And when it comes to getting nookie, I’m not a rookie/I got girls that make that chick Toni Braxton look like Whoopi”), serving as a fitting introduction to listeners. The latter “M.V.P.” is a laid-back track featuring production from Lord Finesse sampling DeBarge’s “Stay With Me” in similar style to The Notorious B.I.G.’s “One More Chance (Remix)” (I’ve heard stories of Puffy jackin’ the sample and beat idea from Finesse after hearing the track’s production, thus is why we hear the “M.V.P. (Smooth Summer Mix)” on the video and not the original production). Nonetheless, this track once again displays L’s lyrical prowess coinciding with the track’s chorus (“If rap was a game I’ll be M.V.P./The most valuable poet on the mic”).

Throughout much of the album L displays his abilities and skills on the microphone over various topics from gold digging (“No Endz, No Skinz”) to the ills of the street life (“Street Struck”) to his hometown/hood (“Danger Zone”), but one of the best tracks to be found in terms of message is “I Don’t Understand It”. This fitting track sees L talking about how he doesn’t understand how poorly skilled, untalented emcees sell millions of records while the superior emcees barely reach 500,000 (“Going platinum and don’t have no soul/Some rappers are mad nice and don’t even go gold”). This song displayed among other things how Big L was a true definition of an emcee that was ahead of his time in 1995 as much of what he said 14 years ago still applies in great deal to the music industry/rap game in 2009. On a ’95 Stretch & Bobbito freestyle session with then young emcee Jay-Z when L rhymed, “I’m so far ahead of my time my parents haven’t met yet” he wasn’t lying and it showed on this album why he was one of those rare emcees that don’t come across twice. As an emcee your only priority on a track is to represent yourself in displaying your lyrical skills and abilities and L does that in more ways than one on this album. The only real flaw to be found with this album in looking at it is the production, which at times can sound dull and get repetitive after a while. But other than that this pretty much is a flawless album that stands up to the other classic Hip-Hop albums released in the same year.

While he might not have been widely known at the time of this album’s release, Big L’s buzz and anticipation as an emcee back in 1995 can be compared to that of Drake’s in 2009. Just from his few promo releases and guest features, people were checking for Big L and waiting the release of this album in a major way. L can even be accredited for giving starts and providing opportunities to a lot of the genre’s major stars of today like Jay-Z, Cam’ron, and Mase who are heard on this album in their younger days and early stages of their careers. He provided an open door and platform for these artists to display their respective skill and talent, which might have gone unheard without his support. Big L’s influence on a lot of the top rappers in the business today hasn’t gone unnoticed, from those using his lines (Jay-Z, Ludacris) to direct inspiration (Eminem). The two-syllable rhyming style used by rappers today like Fabolous, Mase, and Loon was crafted and mastered by Big L during his career. Being the only album that he got to release while alive (The Big Picture was a posthumous release), this album serves as a classic and true definition of a lyricist that stayed true to himself and didn’t deter in light of a changing industry. When listeners today claim Lil Wayne to be a punch line king from his clever lines, I don’t think he has come close to the level of lines dropped by L (“Fuckin’ punk, you ain’t a leader, what nobody followed you/You was never shit, your mother should’ve swallowed you…Turn your tux red, I’m far from broke got enough bread/And mad hoes ask Beavis I get nothing but head”). Rappers today like Wayne claiming the “Best Rapper Alive” title better be grateful that Big L isn’t around cause he wouldn’t be having that as I’m sure cats like Jay-Z, DMX, and others who had the opportunity to rhyme with him can attest to. If not taken from life unfortunately at such a young age, I as well as many others believe that Big L would have been one of the most successful emcees in the rap game today especially given that he was about to sign a deal with Roc-A-Fella Records in 1999 a week before he was gunned down. With a Big L documentary set to be released soon and a final posthumous album release executive produced by Lord Finesse and DJ Premier entitled Real Legends Never Die in the works, the legacy of Harlem rapper Big L is something that will never die as well as never be forgotten.