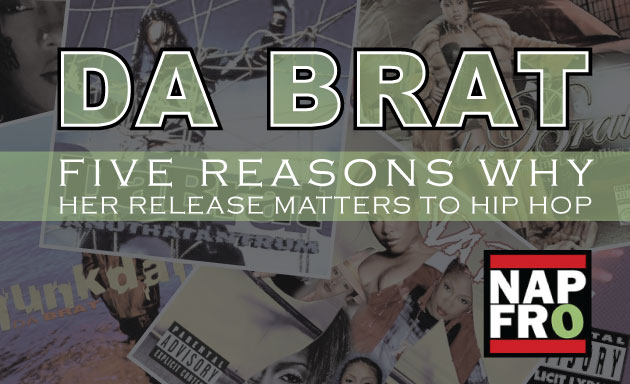 It’s not really fair how much pressure Nicki Minaj has been under since being signed. From bearing the hopes, dreams, expectations, and ire of the world as it relates to females and Hip Hop, to that being directly related to the future of women in the game, she’s taken it all in stride. Now of course, I’m speaking in terms of commercially viable female rappers when I say this, she’s done this with not only much competition, but even less much help. Now that’s changed. Da Brat was released  on February 28, 2011 and I’m sure that Minaj’s camp breathed a sigh of relief. At the same time, a lot of rappers cringed and others rejoiced. I plan to not only tell you why, but hope to sway those of you on the fence to do some of the same.

1. She’s a female rapper that the game respects.
It doesn’t seem to matter where you go, folks discount the current face of the female rap scene, Nicki Minaj. The root of the problem, no mater how they color it, is that they don’t respect her. They either claim that she either gets by on looks, ghostwriters, and anything other than talent (and I don’t agree with that at all, I like Nicki Minaj…for the record).  I have never heard anything but positive vibes about Da Brat. She came in the game rapping with the boys, so there was no doubting that she earned her way into the game. By being the first female rapper to go platinum, she gets respect from the history books and her peers. The only other solo  female rappers that have platinum plaques are Lil’ Kim, Foxy Brown, Lauryn Hill, Eve, Minaj, and Missy Elliott.

2. She probably more versatile than your favorite rapper.
While her killing that remix with JD may not be a fantastic example of out rapping a rapper (even though JD holds his own as a rapper/producer), she can give you whatever you’re looking for from a rapper. She’s rapped fast and fluent as exemplified on the aforementioned remix with JD. She’s rapped with a more mid tempo delivery such on her classic song “Funkdafied” for example. She has also talked about various topics from partying and weed, to her dopeness as well as her own turn-ons in the bedroom. While the game is littered with a slew of 1 trick ponies, she manages to Give It 2 You and there is a song that will fit every mood.

3. She will be able to bring legitimacy to the game without the drama.
As I’ve explained in my previous two points, she’s the real deal. Those points mentioned should help solidify this point as well. Apparently, even with the success of Nicki Minaj (first female rapper to go platinum in 8 years) people seem to think that the only way to pump up the female rap game is to talk shit. Be that discussing the females sexuality over and above her talent or people coming out of the woodworks claiming that they can do what she’s doing better…even saying that she’s not good for the game. Once again, Da Brat has been able to navigate her musical career without much controversy. She’s managed to mostly ignore the speculation about her sexual orientation, the spinning heads at her dressing sexy with the release of her 3rd album, as well as steering clear of beef.

4. She’s going to make rappers try harder.
We have an obsession with sex and race in this country, Hip Hop isn’t immune to that and Da Brat will prove it. Even though rappers have been getting owned on collaborations by the feature spot as long as there have been those type of songs, nothing quite puts the exclamation on a song like being owned by a female rapper on a song. While I’ll concede that “Monster” may have been constructed for Minaj to get shine, I don’t know that any singular moment for her musically garnered as much respect as that verse. You can try to disagree if you want, but in any arena of competition, if a man is going up against a woman and the woman wins, we know that the reply is “You got beat by a girl.” You don’t even have to look any further than the UConn Women’s team going undefeated and the reporting about the women’s and the men’s games and the insane comments that came from that.

5. She’ll really open the door for female emcees.
One of the things we’ve seen with the emergence of Ms. Barbie, is that be it controversy, praise, or debate, the interest in females and their inclusion and appreciation in Hip Hop has been revived. Something about Da Brat really helps energize that, and I think I’ve outlined those points pretty well earlier. Now, for those that are STILL doubting her importance, since she dropped her first platinum debut album in ’94, there have been another 16 platinum female rap records sold. In case you forgot, NONE were platinum before her. Two years after she dropped Funkdafied we saw Lil’ Kim and Foxy Brown being discussed in the spotlight of Hip Hop along with the men, another feat, arguably not done as regularly or commercially since Roxanne Shanté.

It seems pretty clear to me, that her being out and focused on making music again isn’t just good for female emcees, it’s good for anyone who loves this music. I can’t wait for the new album to come out, and you should be just as excited as I am. That goes for males and females.