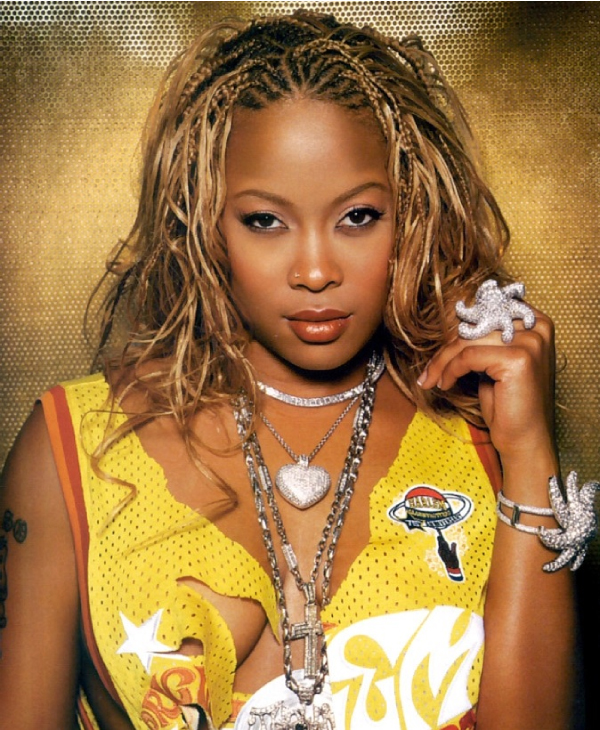 Sorry I never got around to writing you that letter while you were at mandatory college. Charge it to general laziness and not my heart, because I wanted to write you.

I’ve been a flat out fanboy for you since I first saw you spittin’ alongside Kriss Kross. Even then, it was obvious that you had some serious star power.

From there, we got to really roll with you when you dropped Funkdafied. Powered mostly by the title track, this album went platinum. Now I know it was ’94 and many folks were going platinum. Let us not understate the success though, you were the first solo female rapper to go platinum.

Everyone was officially amped about Da Brat. You were doing all the cameos, droppin’ memorable bars left and right and then you blessed us with Anuthatantrum…which somehow hasn’t gone platinum yet. This is easily my favorite Da Brat album. It was cohesive and easy to smoke to…ahem, I mean, if you were into that….

I think that’s when things started to change. Platinum debut, Gold sophomore project, that’s not the progression any label wants to see. I assume calls were made and a conscious decision to be more commercial and radio friendly was made (as the previous album should have been labeled with a warning, but wasn’t).

In 2000 you ushered us into the newer, sexier Brat. Gone were the baggy clothes and braids and in came cleavage, braids became curls and ponytails, and skin tight clothing made you look like an adult film superhero. From grandstanding and gestures to posing and lots of skin….lots and lots of skin. Brat was no longer the girl hanging with the guys trading bars and charisma. She was now talking about sex, being sexy, and going after the guys in videos. The strategy worked and aside from the ladies megahit collab, “Whatchu Like” may have been your biggest hit and a return to platinum sales.

And just like that, we lost you. While the sales said it all was for the best, the people that follow you mourned the loss of a dope rapper eaten by the machine. Sure, everyone grows up and it’s completely valid that maybe YOU became more sexy and wanted to go that route with your look and subject-matter. That doesn’t explain the change in flow and general loss in depth, creativity and delivery. Everything was different. Per usual, you did your cameos on other songs and you had some success with the album, but it was all flashing lights. Nothing garnered from that was real, and the new fans were fair-weather as hell.

You gave us Limelite, Luv & Niteclubz. The album featured a career low 1 single and is still the album that your fans don’t talk about. It’s like it never happened. When you appeared on “I Think They Like Me” we were amped once again. Excited to hear that passion and raw spit that we loved about you from day one. It’s still one of my favorite songs and a definite favorite song from 2005. You did a few more cameos and we thought maybe you’d be returning to form. The excitement was short-lived as there was some legal trouble after that that would take you away from us for a while.

When you were released, we were all selfishly waiting to hear you in the booth. We all wanted to hear you rhyme. We’ve been waiting for your triumphant return to the top effortlessly booting the pretenders from the limelight as you take your place back atop the female emcee game. How long would we have to wait?

Then you gave us that mixtape…and it was bad. 7k downloads in 2 days lets us know that folks wanted this. We all wanted it to be Da Brat…hell, me more than most. If you look around the fro, I’ve been riding for you since I came on board. Even I couldn’t stand behind this mixtape. It’s not even mentioned on your wiki page. Maybe…just maybe it was a bad mixtape. You know, a little off your game because of the long hiatus. Then you gave us this single…

I won’t pretend to know you or know what it takes to stay relevant in the biz. I mean, after all, I’m just a fat dude behind a keyboard. However, what I do know is that this you, evolved/placating/or some blend of the two, isn’t what we want to hear. Let Nicki have that HipPOP shit, you’re Hip-Hop. Let them rap about the other shit, they can have that lane. You belong with the emcees you inspired. You should be doing songs with Rapsody and Nitty Scott, MC. You need dope beats and dope rhymes. Sure, none of us will object to you rockin’ your sexy, but if it means that you bring along those wack songs, go back to the baggy jeans and braids (you still look good). The music misses you, Hip-Hop misses you…substance misses you.

At the end of day, we all know that money moves the meter and I won’t sit here and say cater to us when 80% of your fans are going to download the album either before or instead of buying it anyway. To that point, the industry has changed a lot since Funkdafied and we understand that. That’s also a reason why a return to form may be more in order than ever before. This is the internet age like no other. TV shows are losing out to webisodes, commercial radio is losing the race against internet radio and there is an undercurrent of rappers harkening back to the golden age. Joey Bada$$, Big K.R.I.T., Rapsody, R.E.K.S., Blu, Freddy Gibbs, etc. are all gathering momentum and making a way in a game that commercially would have them sound more like Drake and less like themselves. The result is a storm that is growing stronger by the moment and it’s name is Hip-Hop. Nicki went from platinum to not sold in stores. There is a change and you should be part of it, not outside looking in. I refuse to believe you were away hearing the music that was on the radio and said, “Nah, I got something for them…” and gave us the mixtape and that single. Come back to us.

I’m being somewhat selfish because I definitely want the music back. I’m also thinking of you. There is an entire generation of folks that think of you as the chick who rapped with her pants around her ankles and was on that show with the has been celebs. They think that your mixtape was your first album and that single is your  new album…and even THEY are disappointed. You deserve better…and fuck it, you are better. You came into this game as a pioneer. Braids, baggy clothes and an oversized coat made of “fuck it” announced your entry into the game. Wear whatever you want, be whoever you want, but please, just please, find some vintage Brat when you step in the booth because this shit right here nigga, this shit right here nigga…is as played out as that reference.