And Now For Something Totally Different: Hip-Hop & Chino Moreno (An Introduction) 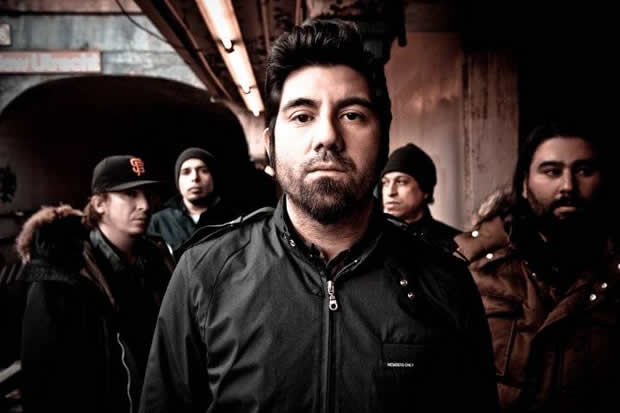 I usually just stay my happy-ass in The Forums, mostly because I feel we have such a talented group of writers/reviewers, there’s never much need for me to try my hand when someone else could do it so much better.

But I do consider myself part of the ‘Fro “fringe” (if we was The Muppets, I’d be Animal), and this is probably as “fringe” as a topic could get. At first glance, the average Hip-Hop head might think the link with Chino Moreno is tenuous as best. But seeing as how Mr.Moreno recently popped up on the Rap radar (see B-Easy’s recent review of Tech N9ne’s album All 6’s And 7’s), and I’m a huge fan of the man’s work…well, let’s see how deep we can dive before I pop your drums….

First off, FAIR WARNING: If you don’t listen to ANY Rock music, there’s probably no reason to keep reading.
This will get a little dark and pretty heavy musically. If you dislike loud guitars in your music, move on post-haste.

Everybody wave bye to King Jerm (*chunks a deuce*)

Quick Bio: Chino is the singer/frontman for the Rock band Deftones (who took their name from Def-Jam for their love of Hip-Hop and the suffix “-tones” as an homage to soul groups from the 50’s era), as well as the main element in the Team Sleep project, and a frequent collaborator in music spanning all genres. Born Camillo Wong Moreno to Mexican/Chinese parents (his nickname “Chino” actually means “Chinese” in Spanish). His band Deftones rose to prominence in the much hated Nu-Metal/Rap-Rock era of the 90’s.

Now I know what you’re thinking, “that stuff was terrible Verb!!!”, and I cant agree more….EXCEPT in the case of 2 bands: Deftones and Incubus. These 2 bands always successfully blended the best elements of Hip-Hop in their music. And because of that fact, they also happen to be my 2 favorite modern Rock groups (so maybe I’m biased). They’ve continued to grow, evolve and innovate in the Rock genre, and that’s why they’re still around making great music while the rest of Nu-Metal withered and died quick-like (Korn who? Limp Biz-what? exactly)

Enough background, lets get to the musical marrow:

Deftones – “Back to School [Mini Maggot]”
This is the song that probably has the most audible connection to Hip-Hop in their whole catalog. When releasing their album White Pony, their record company approached then for a more “radio friendly” single. So they said “fine, we’ll do a Hip-Hop remix” and reworked their track “Pink Maggit”. Chino has since stated he didn’t like being pressured into making the track. Fans were torn. I like the song myself. It stands as the shining beacon of Rap/Rock done well in a sea of Nu-Metal sludge and marketing ploys. To ME.
See for yourself:

Still with me? Its ok if you’re not. If you wanna get off now, I’ll slow down and open the door. You’re free to jump anytime.
Chino himself hates that track. But that was just an intro, it does get much better from here on out…
If we were at my crib and I was just introducing you to the band alone, and not connecting the dots to Hip-Hop, I’d use the song “Be Quiet and Drive”. To me, that stands as a total embodiment of everything Deftones. But for now, I’ll let you go find that one.

Before I give y’all the actual Hip-Hop collaborations, I wanna show just a few more examples of how Chino and his band have worked elements of our beloved genre into their music.

Deftones – “Digital Bath”
Here you’ll notice the drums right off. Abe Cunningham was heavily influnced by Hip-Hop drumming coming up, and if you listen, you’ll notice even in their heavier songs, the drums still have that Boom-Bap feel to ’em. But this joint only has moments of “Heavy” mixed into mostly melloness, with electronic fluttering.

Chino wanted explore the themes in this song more, the rest of the band wasn’t feeling it, so that led to his side pet-project: Team Sleep.

Team Sleep’s self-titled 2005 album had a decidedly more mellow, Hip-Hop/Electronic sound to it (with just a hint of Trip-Hop and Indie Folk). Seeing it as more of an experimental pastiche project, CM even let two other singers lead 5 1/2 of the 15 tracks. After numerous label pushes, it finally came out. See what you think:

The other Team Sleep song worth checking out is “King Diamond” (my personal favorite off the LP), which features Chino having a back and worth argument with a female computer over a jagged, breakbeat instrumental. At least that’s how I hear it.

Chino was good friends with B-Real for years before Cypress Hill asked him to get on one of their tracks.
Remember “Rap Superstar”? Well on the “Rock” CD of the 2-disk Skull & Bones, Chino is featured on “Rock Superstar”…

Cypress Hill – “Rock Superstar”
(He was cut out of the Music Video, but here we see him on stage live performing with them)

See, that’s….well, its just not great. Not horrible really, but nothing special. He’s barely used.

Then you’ve got his cameo on Handsome Boy Modeling School’s album White People:

HBMS feat. Chino Moreno, EL-P, & Cage – “The Hours”
This is just downright terrible. Probably the worst song on an otherwise great album. EL-P and Cage do their thing (for what, 40secs?), but the strange looped sitar sample, the crunchy generic guitar riffs, and Chino howling off-key makes for a track thats hard to get thru even once. See how long you can listen…

What is it about Rock vocalists that makes Hip-Hop producers think “I KNOW! go rub that dusty electric guitar into a mic!” ?

Now we’ve got a decent one, but on Deftones own turf. B-Real jumps on their track this time.
Never used on an actual album, this was finally released on a B-Sides And Rarities compilation. It ends up sounding like another Cypress Hill track featuring Chino again, but this time the results tip the gauge closer to green:

Finally we come to the newest heat. Chino with Strange Music’s leader Tech N9ne. This is the best thing Hip-Hop has done with Camillo yet, this time bringing Deftones guitarist Stephen Carpenter along for the journey. Is it great? It depends of if you like Tech. I’m not a fan, so I’m biased. Maybe one of our resident Techn9itions wants to share their thoughts?

Tech N9ne feat. Chino Moreno & Stephen Carpenter – “If I Could”

Now to leave you with a good flavor in your ears, I could give you the ‘Tones cover of Sade’s “No Ordinary Love” (which trust me, is WAY better than you’re thinking. Think The Cure banging Sade while Trent Reznor watches. On Xanax. In a wet cave…you get the idea.) but instead, here’s a rare, non-album joint. Their cover of “Drive” by 80’s band The Cars, which son’d the original in every way. Its not at all Hip-Hop, its just dope music:

Conclusion: Its obvious Rap has love for Chino (and he for it), but they just dont know how to utilize him properly. Hes a “Session Singer”, hes not known for having great live precision. Without the people he usually works with, knowing how to mold his vocals post-recording, its never going to sound quite right. Think of all those times your favorite emcee just didn’t sound quite right on someone else’s track. Because they don’t know how to work the vocals in post. And until someone figures that out, hes gonna remain that guy they all wanna work, even if they don’t quite know how.

But Now You Know 3 Things:

SIDENOTE: On a serious tip, Deftones bassist Chi Cheng (Who himself put out an amazing spoken word album, The Bamboo Parachute) was involved in a car accident in 2008. His car flipped 3 times and he was ejected from the window at 60mph. He almost died and fell into a serious coma. Hes just now in 2011 starting to finally be able to track small movement with his eyes. His family is in desperate need of donations because they finally found a specialist with an 80%+ recovery rate. Even with the music community doing benefit shows for him (Xzibit, Mike Shinoda, Cypress Hill, Tommy Lee and countless others) and Deftones donating a portion of their last album’s sales, they’re still currently $400k+ behind the 2011 goal. If you’d like to donate, go to oneloveforchi.com.
Few things make ol’ Verb tear up. This is one of them. No pressure, but every penny could potentially help Chi finally wake up.
Our thoughts are with his sister and family.

The Management isn’t gonna let me off the leash often, but if you liked my rambling take on a topic at the outer fringe of Hip-Hop and wanna see more stuff like this (or even if you hated it and don’t wanna see my ass do it again), leave a comment or hit me up at [email protected]
all feedback is feedback.