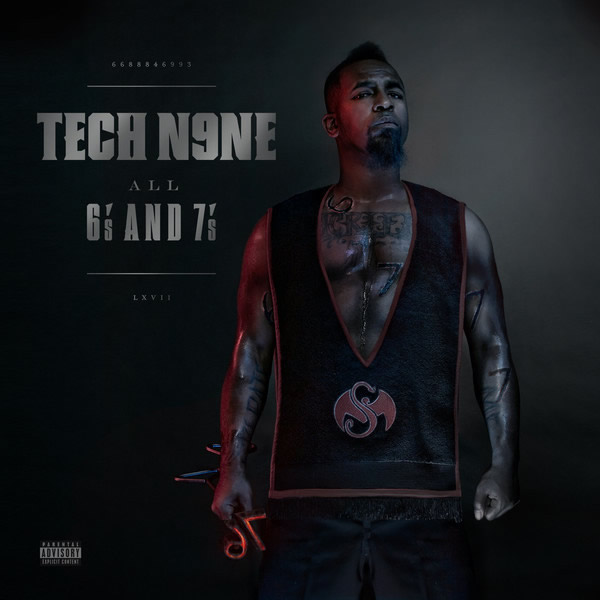 The first time I ever gave Tech N9ne‘s music an honest listen was in 2008 when I had to review what was suppose to be his last album, Killer. That may have not been the best introduction seeing that it was a double album that had 32 tracks. Either way, from me reviewing that album I came out with more respect for Tech N9ne the MC. It didn’t make me a fan but anybody could tell the man was talented. I also respected that he is probably the most successful independent rapper of our time (He sold a million albums under his Strange Music label).

That leads us to his newest album All 6’s And 7’s. This may be his biggest album to date in terms of accessibility. While on this album he still connects with long time collaborators like producers Seven and Wyshmaster and rappers/label-mates like Krizz Kaliko and Kutt Calhoun, Tech N9ne also has guests like B.o.B, Yelawolf, Snoop Dogg, Busta Rhymes, J.U.S.T.I.C.E. League, T-Pain, and Lil’ Wayne.

Tech N9ne himself has stated that All 6’s And 7’s may be the “biggest” and “craziest” album of his catalog. Let’s find out.

1. The Pledge
Produced by Ben Cybulsky
On the album’s intro we hear a NASA countdown but only the numbers 6 and 7 are repeated over and over again. This refer to the album’s title All 6’s And 7’s of course (Which according to Tech means “in a state of confusion and disarray”). After that we get a voices saying a pledge. I don’t know if it’s a reference to Strange Music or another album. Oh wait, maybe it’s setting up the next song…

2. Technicians
Produced by Soleternity
This song is like a call to arms for Tech’s fans (Techn9cians). Over a uptembo beat back by hard bass, Tech N9ne gives a few different flows on the album opener. I don’t love it but it does seem to work as an appetizer for the rest of the album.

3. Military (Skit)
Produced by Ben Cybulsky
This is kinda like the “The Pledge” but this time with military cadence. It keeps the theme going from the last two tracks.

4. Am I A Psycho?
Featuring B.o.B & Hopsin; Produced by B.o.B
B.o.B puts down the guitar for minute and get psycho with Tech & Hopsin…

I’m sorry, I didn’t mean to hurt your feelings
I see your tears, come here, give me your face, let me clear it
But I wonder how it would look if I could peel it back with a skillet

More surprisingly is that Bobby Ray also produced the uncharacteristic beat. All the rappers involved here do their best to make Norman Bates proud. I don’t know if the goal is succeeded but the whole this sounds like something Eminem would have did on the Slim Shady LP. Average.

5. He’s A Mental Giant
Produced by Seven
I remember Tech N9ne saying that this track was his being arrogant. Instead of being the usual humble person, on this this song he wanted to let the world know that lyrically he is head and shoulders above the rest.

Hey! I’m lookin’ down on you niggaz
Even though I’m 5’8” & 195 pound on you niggaz
So tall I can’t even hear any of the sound you deliver
Me and my partners never see any of the hateful frowning you give us

In terms of flow and cadence, Tech does prove that they’re few that can mess with him with the fast rap. As for the production, I really didn’t like the sample used here but it fits what Tech N9ne is trying to say.

Sidenote: For those looking for the origin of the sample, it’s from a classic 1939 cartoon titled Boy Meets Dog.

6. Worldwide Choppers
Featuring Ceza, JL B.Hood, Uso, Yelawolf, Twista, Busta Rhymes, D-Loc, & Twisted Insane; Produced by Seven
If you a lover of speed rapping, you MUST go and download this song. Like right now. The only thing it’s missing is verses from Bone Thugs. I also give props to Tech for really sticking to the name; he got dudes from Denmark to Alabama on this one.

Sidenote: I remember seeing a video that has Busta Rhymes meeting Yelawolf for the first time. In the video, Busta says he wants to test Yelawolf’s speed rapping ability on a Just Blaze produced track that featured Twista. Could it have turned into this song?

8. I Love Music
Featuring Kendrick Lamar & Oobergeek; Produced by EmayDee
So far, the live instrumentation on “I Love Music” has it being the front runner as my favorite track off the album. It’s also good that Tech gets Kendrick Lamar on this one. I don’t know who the hell Oobergeek is (Google didn’t bring up much) but he does his thing here

I don’t mean to toot my own horn, but toot toot, ha ha
I laugh because it’s easier than do ray mi fa so la
Ti do, we know he go … on that C Note
And he can play a C Note with that B Note

Am I in the Twilight Zone? ‘Cause my mics
On, but I never thought the world would buy my songs.

The collaboration works because it’s a good change a pace from the rest of the album.

10. Call From Richie (Skit)
Produced by Ben Cybulsky
I don’t know who Richie is but he talks about reading an old HipHopDX article interviewing Tech N9ne and understanding Tech making dark records.

11. The Boogieman
Featuring Stokley of Mint Condition & First Degree the D.E.; Produced by J.U.S.T.I.C.E. League
Here Tech N9ne changes up his voice. I thought it was gonna be one of those things where he argues with himself (Like Biggie or DMX) but he never really raps in his normal voice. Other than him saying “The Boogieman is real” I really didn’t understand what was going on this song.

12. Cult Leader
Featuring Liz Suwandi; Produced by Seven
The song starts out with audio from an interview where Tech N9ne is asked if he’s a cult leader based on his die-hard fan dedication. Obviously he doesn’t like this title as the song goes against that as being against racism and hate is talked about.

13. Call From KC Poet Camile (Skit)
Produced by Ben Cybulsky
A women that Tech inspired leaves a phone message that contains a raunchy poem. I wonder what the next song is about?

14. Fuck Food
Featuring Lil’ Wayne & T-Pain; Produced by Seven
When I first saw this song on the tracklist, I wondered why Tech didn’t immediately make this the first single; you know, for the radio. Then I realized that the song was called “Fuck Food”. And then I listened to the song. The funny thing is that this does in fact sound like something that would be on the radio but it’s too explicit (Women = Fuck Food). Maybe it’s strictly for the club.

The song as a whole is okay but I would have preferred a track that just had Wayne and Tech just straight rapping. But maybe they saved that track for Tha Carter IV.

15. Overtime
Featuring Stevie Stone; Produced by Jayson “Koko” Bridges
I guess we’re in the “sex portion” of the album as this is another song about, uh, sex. While the rhymes are still explicit, it’s still your standard “I be tearing up pussy song”. I coud do without the chorus too.

16. Pornographic
Featuring Snoop Dogg, E-40, & Krizz Kaliko; Produced by Seven
Hmmmm. This song may have sounded better if it didn’t sound like “Fuck Food” (Just with West Coast rappers instead). Also, has any one noticed that anytime Snoop is featured on a song these days, it’s a song about sex or weed?

17. You Owe Like Pookie
Featuring Jay Rock & Kutt Calhoun; Produced by Seven
Is this “You Owe Like Pookie” like New Jack City Chris Rock Pookie? Yup. I just realized that Jay Rock signed with Strange Music. While I really didn’t like the song (The hook was kinda silly), I was happy to get out of the sex section of the album. Jay Rock also sounded inspired on this track too.

18. Delusional
Featuring Nikkiya Brooks; Produced by WillPower
Tech touches on topics like being called a cult leader to being a good provider for his kids but not a good daddy to drinking to deal. Nikkiya Brooks is a good addition to this song and fits with Tech’s style and the song.

19. So Lonely
Featuring Blind Fury & Mackenzie O’Guin; Produced by Wyshmaster
If this song reminds you of something that Eminem would rap on then you have a good ear or you either read the article that said this track was intended to include a Eminem verse. Here Tech talk about it being lonely being on top of the lyrical mountain.

Wait..it that Blind Fury from 106 And Park Freestyle Fridays?

Listen, I know I’m always gone
And I ain’t never home, and plus you barely ever hear me on the telephone
Just tryin’ to sell a song, to my bride ain’t jealous known, and my hell/Is showin’
But if I rest it’s just like all my mil thrown

The feeling of the song comes threw and towards the end you have Tech screaming just asking for time to make it right.

21. Angry Caller (Skit)
Produced by Ben Cybulsky
We hear another voice mail but this time this women goes off on Tech N9ne. Pretty funny.

22. Love Me Tomorrow
Featuring Big Scoob; Produced by Seven
At first I thought this song was about dealing with groupies/women who hate Tech after they slept with him, but then he talks about people getting upset with him for expanding his sound and collaborating with artists like Lil’ Wayne. He even has a sound bite where he says that “Tech will never go mainstream; mainstream will go tech”. Understood.

She carried me when she was fifteen
Had me when she was sixteen
Reminiscing on how well she did things
Got one popped on 11/8/71 she had this king
She was baring that on day
I was just a staring upon that face
With her, just declaring my mum said wait
Than her and her sisters named me Aaron Dontez Yates

You can’t hate on a man for showing his mother love.

24. Promiseland
Featuring Nikkiya Brooks; Produced by Wyshmaster
This is Tech’s victory lap at the end of the album; kinda like an acceptance speech remembering how he got here and what he’s accomplished. “Strangeland” and “Promiseland” could almost be looked at as bookends.

Bottom Line:
While All 6’s And 7’s does have more accessible guest spots on this album than ever before, it’s still the more or less the same Tech N9ne style of music he has been doing since the start of his career. This is probably great to hear for longtime fans that were worried about Tech loosing his sound.

But is this an album that will get people that don’t normally listen to Tech N9ne take notice? Maybe.

One thing that keeps this album from being a better album that’s easy to get into is the length. Minus the bonus tracks, All 6’s And 7’s is 24 tracks long. For a first time listener, if they’re not immediately blown away by the first few tracks, it’s doubtful they will sit through the whole album. But, if it’s true that this album is exactly 76 minutes long I will give him points for synergy.

The other thing about Tech N9ne is his flow. All 6’s And 7’s hasn’t made me a card carrying Techn9cian (Tech N9ne fan), there’s no question on his talent. But I do understand that his automatic weapon flow and cadence is a love or hate it thing. If you don’t like that kind of style of rapping, you probably won’t like most of this album. If you like that kind of thing or can even get past it, you will like this album and I’m pretty sure you already like Tech N9ne.