Dom Kennedy – From the Westside With Love II [Review] 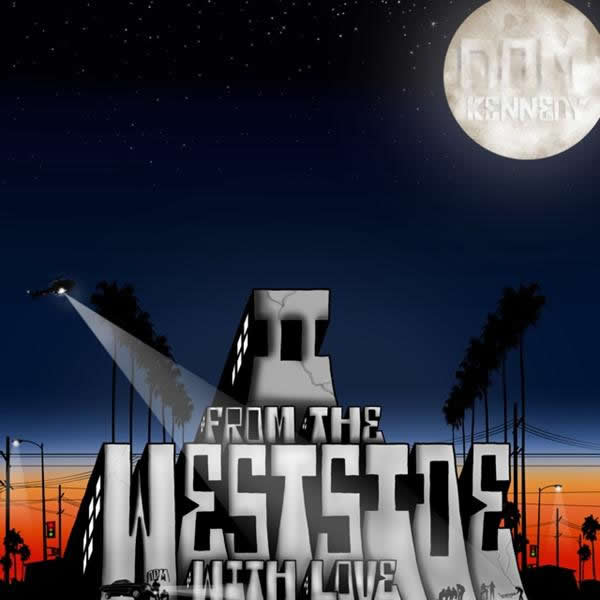 There tends to be a few different kinds of critics when it comes to reviews. Some follow you closely and/or are fans so they can critique you based on your catalog or they are new to you’re music and look at you through a pretty clear lens. I’m the latter in this case. One of the things I really dig about doing reviews is exposure to new music and artists that I may not have checked out on my own. Dom Kennedy‘s buzz is, well, beyond buzz at this point, and it outright making noise. From the Westside With Love mixtape is really what has the streets checking for and cosigning the young brother from Los Angeles, even though he himself thinks the project felt like an open book, unfinished even after the praise. So it’s with that outlook he brings us From the Westside With Love II in hopes to close that book and make a good, complete look at him, the west, and the lifestyle that molded him.

It’s important to note that Dom doesn’t have any ideals about being the most lyrical or most conscious rapper out there. It’s clear that he has his eyes on being the most charismatic cat in the game and the new face of West Coast Hip-Hop, something the game has been missing. What that means for listeners is that we’ll have to forgo critiquing the simplistic rhyme patterns and focus on the overall sound and how he says what he says.

That said, there are some moments on this album that give you that real good Cali vibe and rollin’ (double meaning) music on this iTunes debut. “When I Come Around” seems like the 2011 version of “I Get Around” both in tempo and imagery. This song feels like the audio version of that summertime video, if that makes any sense. Again, you have to get passed the delivery on this one that doesn’t sway from the 1,2, 1,2,3 delivery style verse to verse, and focus on the overall vibe. “Come Over” is one of the better songs on the album. It features the Celly Cel (site him since he’s from Cali and that’ probably where Dom heard it first) bassline sample from “It’s Goin’ Down Tonight”. The drums are a bit busy here, but the sample and hook really give the song that Cali feel. Two other songs that give that Pacific Time Zone steez are “Platinum Chanel” and “I Love Dom” which are heavily dipped in charisma and arrogance, in a good way. Want some music to help you feel like you you’re untouchable?; These songs should definitely be on the playlist.

The album isn’t completely made up of songs that sound like they rep Cali to the fullest, he takes a few chances on this album. “OPM (Other Peoples Money)” is a very funky track that isn’t necessarily tied to your thoughts of the Left Coast sound, but it’s very funky and good time inducing. While the song is almost comedic when singing “We spendin’ OPM / Other peoples monay/ and we like it, love it” it also features some of his better rhyme work on the second verse. I’d definitely say put this on at a party. On “The Ways” Dom takes to some Neptunes production…and it’s not bad. It’s hard to forgive the flow on this one because the track is so stripped down that he tends to get annoying by songs end. Two of the more successful reaches are “New Jeeps” featuring Asher Roth & Mikey Rocks and “2mph” featuring Big K.R.I.T. The track on “New Jeeps” is okay, very simple and different, but it’s Asher (of course) that turns in one of the dopest lyrical spots on the album. Big K.R.I.T. appears on the molasses draped track of “2mph”. Dom jumps all over this track sounding like he’s trying to make sure you remember him before K.R.I.T. gets to his verse…but ultimately, it’s K.R.I.T. that owns this one while channeling Bun B.

Y’all know me, and I don’t blow smoke because folks are all over someone, so yes, this album has some songs that just don’t work. “Grind’n” is probably the most annoying song I’ve heard this year. Even the scratching on the hook can’t save this from some of the most color by numbers rhyming and annoying hook by anyone that side of the Mississippi. You can tell by the title what the song is about, but there is nothing about this song that makes me want to do anything but hustle to the skip button. “She Ain’t In Love” isn’t nearly as bad as that song, but the beat is so busy that I can’t focus…on anything. We definitely could have used some discretion when layering this track…sometimes, less is more. He also misses a step on “Beats, Hoes and Rhymes.” On this one, he teams up with some of his homies to basically let us know again, about a night out in the west and how they get down. Unfortunately, this song is basically unbearable from the word “disrespectful” and the attempt to be funny with using this word to the horrible synth sounds and singing on the hook.

Bottom Line:
Just like any album, you have to take it for what it is. Dom Kennedy is focused on being fun, having an abundance of “swag” (damn I hate that word), money, and women. He’d like to have this play as his soundtrack while doing all of the above. Problem is that he did that already with his first album and this one comes off as a step back. With some tracks parading around as full songs while only repeating a few words ad nauseam and limited rhyme dynamic as well as subject-matter, this album isn’t what I was expecting. With some bright spots and probably an equal number of forgettable moments, this album is about as average as possible. If you’re looking for a good place to start in your understanding of who Dom Kennedy is, check the critically acclaimed From the West With Love part 1…because some albums just don’t need sequels.