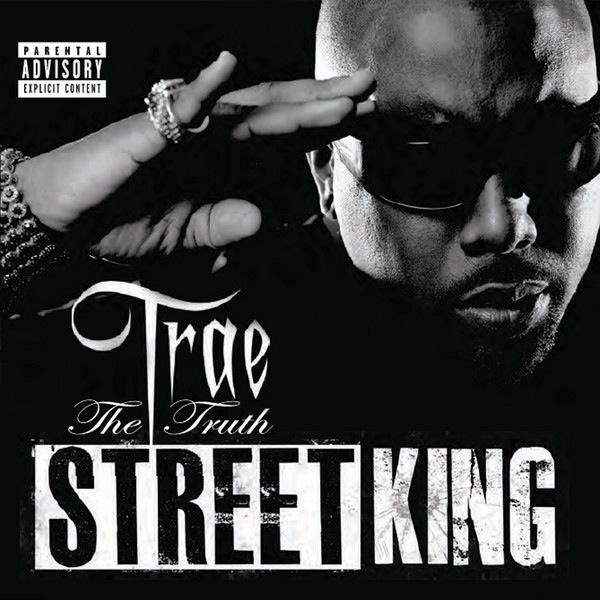 Trae Tha Truth is one of those rappers that is perceived different once you enter his home field. Outside of Houston, he may not be the biggest name, but inside it’s much different. From having a day officially named after him (Trae Day) to causing controversy and getting his music banned on local radio stations, Trae definitely has made noise is his hometown.

But then again looking at the list of cameos on his new album Street King, Trae has obviously gained the respect for rappers outside of Texas. For his 6th album, Trae Tha Truth goes from the crown of the streets.

Sidenote: Trae is another one of those rapper that changes up the spelling of his name a lot. I’m going with Trae Tha Truth instead of Trae The Truth here because that’s what mostly in my iTunes.

1. Strapped Up
Featuring Purexx; Produced by Drumma Boy
Over menacing production provided by Drumma Boy, Trae startes out the album with his patented hushed fast flow that explains he’s not to be tested on the street:

You niggas fucking up I’m here to get it back
Tell ’em I sick, even sicka when I hit a track
Never been the one to give a fuck about what you feeling
Cause if you feeling anything different I ain’t feeling that

I’m not to familiar with Purexx (He reminds me of Pitbull) but he does his thing too.

This is a good opening that gives you a feel of the album.

2. Woke Up This Morning
Featuring Rod-C & JayTon; Produced by Boss Kon
Sound wise, this track shares a lot of the elements from the previous one but just slowed a bit. It’s basically about wacking up in the morning with money on your mind and being ready to hustle. Everybody sticks to the script here; nothing notable.

3. Inkredible (Remix)
Featuring Rick Ross & Jadakiss; Produced by Mr. Inkredible
The original “Inkredible” was a sleeper hood banger. I say that, because it should have been a bigger hit across the country than it was and the instrumental (Which was crazy) is still heavily used. Surprisingly they are able to match the same atmosphere as the original; maybe even better. All three rappers turn in good performances (Trae didn’t get lost beside the features), but Rick Ross’ verse is probably the most notable:

Hard times call for drastic measures
I call my dog, he bought a mac 11
40 rounds hollerin’ where the yola at?
Nigga dead serious, chopper with a shoulder strap
Microphone, Michael Corleone I know I’m wrong
The man up above love for me to sing them poem

If this is not the second single off Street King, it should be.

4. Gettin’ Paid
Featuring Wiz Khalifa; Produced by V-Don
The first official single off Street King finds Wiz Khalifa counting money with Trae. While I assume that “Gettin’ Paid” was chosen because of the Wiz feature, the production actually sounds like something that would be on one of Wiz’s mixtapes. The slow bass heavy but still smooth beat make this a win. Nice track.

5. I Am the Streets
Featuring Rick Ross, Lloyd, & Game; Produced by CyFyre
This track is a good example of why high profile features don’t guarantee a good track. Even with Ross, Lloyd, & Game all here, the song still feels bland from the verses down to the production. Not a skip but definitely not something that lives up to the hype.

6. Keep On Rollin’
Featuring Gorilla Zoe; Produced by Track Bangers & Mr. Inkredible
When I saw Gorilla Zoe’s name, I knew that this track would be mostly singing. I was right in my assumption but at least Zoe left the Auto-Tune at home. This is one of those tracks that you’ll either love to hate. If you like laid back, drug induced song with rappers singing, you should should check this one out. If not, you may wanna pass.

7. That’s Not Luv
Featuring Lil’ Wayne; Produced by StreetRunner
For those who recognize this track from Fabolous’ The Soul Tape, that because it basically is. The beat as well as Wayne’s verse are the exact same. It does seem as if Trae may have had the beat first seeing that Wayne actually shouts him out in the his ad-libs. Still a good track but Trae’s verse goes in a different direction that Fab’s.

Mashing as I think of my brother, lord tell ’em I love him
Maximum security got it where I can’t even hug him
The devil hate me but fuck it I don’t think nothing of him
I hate that bitch too. End of discussion.
He left me with a sister just images of a murder
Knowing she cried for help just wishing I coulda heard her

9. Goes Out
Featuring J-Dawg, Brian Angel, & Scarface; Produced by Mr. Rogers
Here we see all the rapper involved remember fallen friends. Scarface may have summed it up when he said; “This just another sad rap song that I shouldn’t have to write”. It’s not bad and it’s heart is in the right place, but it doesn’t really stand out with the many other songs about this subject. And yes, that’s Brian Angel, from Day26, singing the hook.

10. Slum Religion
Featuring Wyclef Jean & Goldie; Produced by Wyclef Jean, Jason, & Goldie
Yea, I was surprised to see Wyclef’s name here too. The combo of him and Trae isn’t as strange as you think, but it’s not that great either. Trae and Clef’s styles just don’t mesh that well. Weirdly enough, Wyclef & Trae Tha Truth are also supposedly planning an album together.

11. Not My Time
Featuring Lynzie Kent; Produced by Brad of Revelation Sounds
I won’t front, I thought this track was kinda sappy. I understood the message, but take Trae off the track and this could be Lynzie Kent’s with no problem. Trae’s dropping knowledge, but the beat is too soft (I’ll admit that it could be the sequencing of the album though).

12. Hood Shit
Featuring Shawty Lo & Yung Quis; Produced by Mr. Lee
The kings of the whisper flows unite here as we see Shawty Lo shows up on this track. I never got into this one because it seemed to be missing something in the simplistic production; it felt like another layer should have been added. The other parts of the song aren’t really anything to write home about either.

13. I’m Fly
Featuring Yo Gotti; Produced by Mr. Rogers
Trae & Gotti turn up their flossing here (As if the title didn’t give that away). As with the last track, I’m really not feeling the production here either. I did surprisingly like some lines from Yo Gotti (“Brought a half a bottle in the club but I don’t drink though”), but that’s about it.

14. Street King
Produced by Track Bangers
I just realized that we’re at track 14 and this is Trae’s first non-feature track of the album (Appropriately, it’s title track of the album). Over a beat that is a bit of a lift in terms of quality from the previous two tracks, Trae goes for dolo as to why he’s royalty in these streets:

15. It’s All I Know
Featuring Messy Marv; Produced by Boss Kon
Trae enlists the help of San Francisco’s own Messy Marv to explain how the street may be all they know. Even with the subject matter, the best is so mellow, some will start rolling up immediately.

For some reason, I think that this songs shares the same sample with Ghostface’s “All That I Got Is You”, but I may be wrong.

16. I’m Gone Bus
Produced by Rugah Rahj
The second and last song of the album that has Trae with no features. He’s back on his singing grind here too. When he does rap he sounds focused but when he sings the hook it sounds silly because he choose to spell out some parts:

17. Just Don’t Get It
Featuring MDMA; Produced by Rockaway Productions & Platinum Hands
While this isn’t my favorite track on the album, I could honestly hear this one on the radio (Check out that hook and tell me I’m wrong). The production sounds full as Trae talks about loyalty of some former friends. This one surprised me and shows he has range.

18. I’m On
Featuring Lupe Fiasco, Big Boi, Wale, & MDMA; Produced by CyFyre
You can say a lotta things about Trae Tha Truth, but you can’t say he can’t get a feature. It may not be the best posse cut you’ll hear this summer with “I’m” & “On” in the title, but it’s still good.

The original leaked version of this song included Wiz Khalifa but was taken off on the album version.

Bottom Line:
Like I said in the intro for this review, the all-star features on this album shows that Trae has a lotta respect throughout the industry. But that may also be a drawback to this album. To me, even though Street King is Trae’s 6th studio album, it is his biggest look in terms of exposure. But so many features didn’t give new listeners time to see Trae Tha Truth show his talent by his lonesome (I still would’ve also liked to see ABN cohort Z-Ro somewhere here though).

You still get to hear gritty street tales from Trae and for your money, he gives you a lot. In this day and age 19 tracks may be too much for most listeners, but it also gives people a lot to chose from.

This album, while still good, may not be the one that claims the crown for Trae, but to his loyal fans, Trae’s still the Tha Truth.