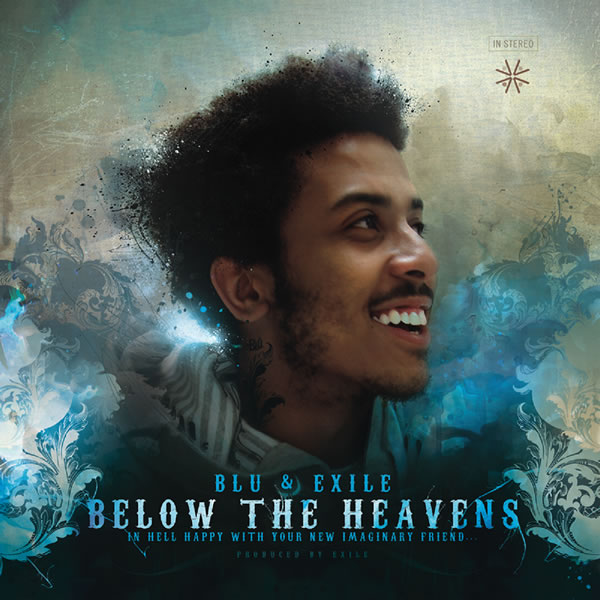 There are a lot of records that come to mention when discussing some of Hip-Hop’s best soulful albums. Some that come to mind are Pete Rock & CL Smooth’s Main Ingredient, Common’s Resurrection, and Little Brother’s The Listening. It’s hard to find an album that contains the same amount of soul nowadays. That was before the debut from Los Angeles’ duo Blu & Exile. It’s the first album from Blu, while Exile had previously released his solo Dirty Science and two albums as a member of the group Emanon. They released Below the Heavens in 2007 through Sound in Color records. The album’s concept was simple: beats, rhymes, and life.

From the opening track, emcee Blu sounds like a man on a mission. Lyrics like “Fuck a critic, this is my life” details what you’ll hear on the album and how genuine the lyrics are. On “So(ul) Amazin’ (Steel Blazin’)”, Blu impresses with his lyrical skills while Exile’s production gives the song it’s very own West Coast soul vibe. “In Remembrance of Me” is a great introduction on who Blu is as he rhymes about how time flies throughout the years. Blu gives us his version of “The World Is Yours” on “The World Is (Below the Heavens…)”. This track is about building your own heaven mentally to be content with yourself:

Blu also tells us stories about his struggle, and how he’s gone through the pain to become who he is today. Tracks like “The Narrow Path”, “Dancing in the Rain”, and “Cold Hearted” help demonstrate this. However, at the same time, he gives us a moment of clarity behind each song with lessons learned. For example, on “Show Me the Good Life”; Blu starts the first verse questioning himself (and God) if he’s ready to have a child. The second verse features Aloe Blacc rhyming about how believing in yourself will help you make it through the bullshit. On the third verse, Blu tells God what he’s going to do in order to find the good life and get through this situation. The track changes moods with direction from doubt to belief. It’s a deep track that shows how versatile Blu can be behind the mic.

Furthermore, Blu has a few tracks that are directed towards women. “Blu Colla Workers” is more of a fun track that tells how he’d rather put time into his music than a chick who is only out to use him. “No Greater Love” is about love and how powerful it can be for both the best and worst. “First Things First” is a track about getting at women with no gimmicks. These lyrics show Blu’s realness:

Now, don’t get it twisted broke niggas need love too
And underground rappers like to chill at the club too
I wanna get buzzed, get drunk and get crunk
Get a chick to kick it with when I’m feeling fucked up but
Women be mentioning ya’ whips and your chains
So I flip it like slaves come with whips and chains, we gotta liberate
But before I could mention my name
They be talking to the nigga with the keys to the range

Producer Exile also makes a big contribution to the album with his numerous soulful samples from Smokey Robinson & the Miracles to Martha & the Vandellas. When he isn’t lacing the album with samples, he is mixing the record with cuts that’ll have DJ Premier impressed. My favorite produced song is on the last track, “You Are Now in the Clouds With… (The Koochie Monstas)”. This features an influential soul clap that’ll bring you above the heavens and gives the album that finishing touch to becoming a classic. If you’re a fan of soul music and looking for a great summer album, then I recommend picking this up.