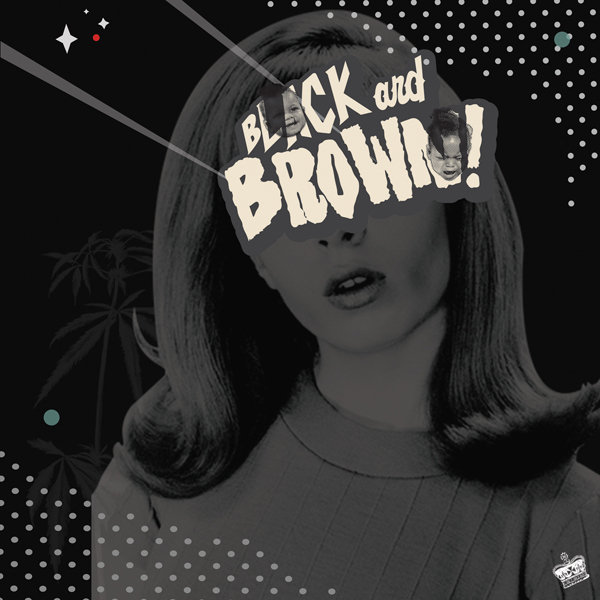 Sidenote: All songs (Of course) are produced by Black Milk.

1. Sound Check
For the Black And Brown opener, we get no rapping but Black Milk serving up an quick instrumental. The way Black Milk handles these samples would make Dilla proud. You know when an album uses a beat for an intro or a interlude and the beats should have been used for an actual song because they were so well done? This is that right here.

2. Wake Up
On Danny Brown first appearance on the EP, we see exactly why people are taking notice of this guy’s skill. With his trademark voice (And no hook in sight), Brown raps for roughly two minutes straight:

Got the game locked in a crowbar
Never ever sober, hot box and no cars
Watch the day pass on prescription pill Zoloft
If I don’t have it, nigga I’mma go off
Razer in the coke tryna slice a nigga throat off
Nigga on my ogre, rap like oh god
Hitting bitches from the back camera on the tripod
In your bitch ipod, never rocked Izod
But I rock the python, choke it to your life gone
Nigga I’m amazing, no not a mason
You illuminati, nigga I’m Jason

Black Milk uses Uriah Heep’s “Wake Up (Set Your Sights)” as the backbone of beat and matches Brown’s tone pretty well. The first song here is a success.

3. Loosie
Like the last song, and basically every song on this album, “Loosie” is full of Danny Brown’s drug laced metaphors and quotables (“Morphine metaphors make you do the shoulder lean”) Black Milk changes up things a bit by adding more synth as well and handling quick chorus duties. The hard drums are still here though.

4. Zap
The song starts and it’s mostly a high pitched sample with barely any bass to go with Danny’s inspired rhyming. If it ended there, I probably would have been fine with this. But around 30 second mark, the breakbeat kicks in and the song turns into a instant head nodder. The only problem is the song is that it’s barely two minutes.

If this album even has a conventional first single, it would have to be “Zap” as it was the first song that most heard off Black And Brown. When this track came out, many thought the reason for the for the title was that it samples Frank Zappa. While Black Milk said that wasn’t the case, I think because Danny Brown calls himself the “Black Frank Zappa” on the song.

And that’s how Danny Brown starts off the song.

Like most songs off this album, the title really doesn’t have anything to do with the actual song other than Danny mentioning Jordan VIII is passing. This time Black Milk makes a futuristic sounding beat. It’s not bad but since the song is only a minute and a half so it’s gone before you can really grasp it. 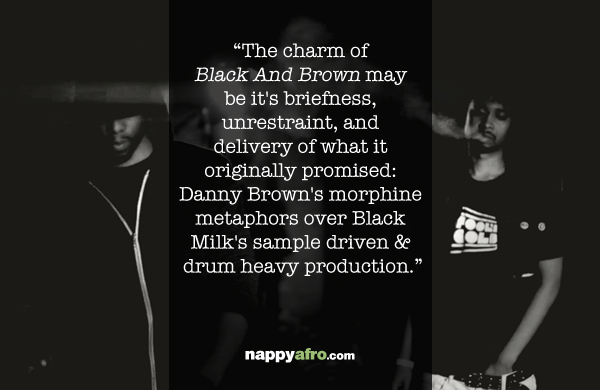 6. Dada
I mentioned Black Milk’s sample use and J Dilla-like production skills earlier but here it really shows to good results. This almost sounds like a Middle Eastern song slowed down but I may be wrong although at the end Danny Brown does say “Detroit Niggas got it wrap like turban”. Speaking of Danny Brown, he’s still in rare form here: “Tell me why your breath smell like a burning bag of fag cock“. Nice.

7. WTF
Black Milk gives us another instrumental. I actually hate writing about instrumental tracks but I will say that it shows that Black Milk is too damn underrated. This is another beat that should/could have been used for an actual track.

8. LOL
I guess the only way to follow up a song call “WTF” is a song called “LOL”. Black provides a guitar heavy soul driven sample for a song that may be the most complete on the album in terms of theme and hook. It also may have the funniest and craziest line of the album with “Put my dick on her nose and she look like Pippen”. Crazy.

9. Dark Sunshine
On the last instrumental track on Black And Brown, it sound like Milk is getting us ready for the ending as this one is more subdued the other before.

10. Black And Brown
This track was also on Black Milk’s Album Of The Year and may have been the genesis of this whole project. It’s still a great track but it makes me wish that Black Milk would have given some verses on this album as he shows here that he isn’t a slouch behind the mic either. While this feels like a bonus track, it also fits on the album.

Bottom Line:
Since Black And Brown is an EP, it’s understandable to be short in length (It clocks in barely over 22 minutes). But the actual songs here aren’t very long either; most are under three minutes and most with no real concept or theme. Black Milk does things like putting instrumentals and transitions after and before tracks that link it all the together, but points have to taken away for how quick this album is plays through.

But on second thought, the charm of Black And Brown may be it’s briefness, unrestraint, and delivery of what it originally promised: Danny Brown’s morphine metaphors over Black Milk’s sample driven & drum heavy production. Two of Detroit’s finest deliver that here but will still leave most hoping for a full length outing in the future.