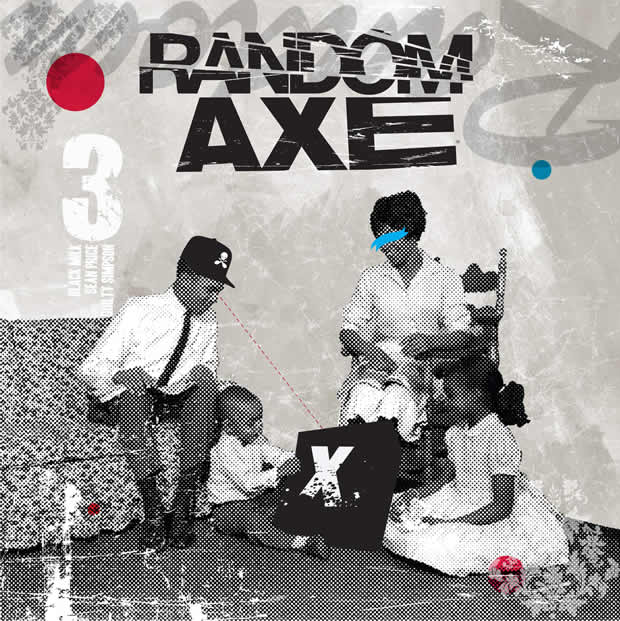 I first heard Black Milk in ’04 off Slum Village’s Detroit Deli album. The track was “Reunion” and it was probably my favorite cut off the entire album (I thought it was a Dilla beat for the longest time). The following year Black Milk dropped his debut Sound Of The City. He went on to release three more LPS including last year’s Album Of The Year. All his albums show how talented he is behind the boards, but also show that improvement is needed on the microphone. Enter Guilty Simpson and Sean Price – two Hip-Hop veterans who have been slaughtering beats since they’ve been put on. Guilty hooked up with Black Milk for the first time on the Popular Demand album, and Sean Price later appeared on Tronic (alongside Pharoahe Monch). Both tracks were standouts and show how well these two sound on Black Milk’s production. Now they have teamed up to form the super-group Random Axe. Two emcees known for spitting grimey lyrics and a producer who is starting to develop his own sound. Let’s hope it sounds as good as it looks on paper.

All tracks produced by Black Milk

1. Zoo Drugs
Black Milk starts the album with an instrumental that sounds like it was a leftover from Tronic. Listen to this a few times and it’ll feel like you’re on drugs. Nothing really special though.

2. Random Call
Guilty Simpson and Sean Price join Black Milk for one of my favorite tracks on the album. The beat sounds like Black Milk puts it, “some end of the world shit”. Guilty quickly kills it on the first verse,

I’m chemically imbalanced, you’re no challenge, I eat hot emcees like cold salads, I’m so valid, trust the word, find me in the ghetto puffin’ herb.

Sean Price goes hard on his verse and keeps it grimey,

Yo, you can’t mess with the bomb shit, Me Guilty and Black is aggressive content, No love letter rhymes and raps about chicks, just a whole lot of drugging and thugging, that’s it.

Black Milk closes it out and shows that the producer can hold his own too.

3. Black Ops
Featuring Fat Ray
Black Milk laces the track with a thumping beat that goes in 30 seconds before hearing Fat Ray on the hook. Guilty and Sean P’s chemistry starts to really show. They have similar deliveries but they each hold a different style that can only complement each other. Black Milk doesn’t rhyme here. Nothing against Black Milk, but I think that’s for the best. I’m feeling the vibes. I’ll say this is a standout.

4. Chewbacca
Featuring Roc Marciano
Sean Price does a good job with the first 16 bars, but Guilty gets on and murders it,

Your tough talk, I don’t get it, you wouldn’t fight a ticket, so I recite a lyric, especially when lyrics get a rifle at your fitted, I’m sure to buck so tell Pac ‘What up though’.

Brothers ain’t been in our bracket, slugs from the Gatlin that spin out rappin’, Flip the casket, lyrics is crafted, hit ‘em with the plastic, then I’ll pass it.

No Black Milk here, but he ends it with a Wu-Tang inspired beat that comes off “random”, but nice.

5. The Hex
Black Milk’s production really starts to knock on the album’s first (video) single The Hex. Here, he throws on a loop that features an electric guitar blended with heavy drums. I also like how he chops up the beat. This time around, all three members come with it. Guilty starts it witty rhymes,

I crossbow harsh flow, hit ‘em in the heart, I’m true terror beneath a new era, it’s like ya acting but forgot ya parts, so I’m yelling cut to reclaim my art.

Ruck gives us his grimey comical side,

Afro American gangsta, I shank ya, sharp a toothbrush in the gut of a wanksta, cone head hoodie, no KKK, just mayday mayday, let the AK spray.

6. Understand This
This is one of Black Milk’s more average beats on the album. It’s not wack, but it sounds like a simple job with FL Studio. Guilty and Sean P manage to ride it out with their lyrical onslaught. I’ll have to say Guilty took the track with lines like,

Hold me down, I’m a problem, a severe one, punch drunk rappers get socked on the beer one, (random!) never been afraid to scrap, I’ll make your whole life fade to black.

7. Everybody Nobody Somebody
Black Milk recovers from the last track to a beat that is a standout on its own. His drums are starting to stand out on nearly every track. It must be a Detroit thing. Sean Price takes the first 16 bars and puts the word “everybody” throughout the song. Black Milk and Guilty Simpson do the same with “nobody” and “somebody”. The idea works as each emcee goes into a different story. I like Guilty’s “somebody” verse about a prostitute the most. At the end of the track, Black Milk throws in an instrumental interlude. This has a Detroit style to it too.

9. The Karate Kid
This is the Sean Price I’m used to. He does “The Karate Kid” on his own and rhymes about his grimey lifestyle,

Embrace your satan, evil is good in my hood when paper chasin’, this is what happens when Jason took moms to the tiller and had relations, this will never be mainstream, it make you sell crack, bust gats and blaze green.

This is a pretty good track for only one minute long.

10. Never Back Down
Guilty takes the next solo and stays consistent with bodying beats. Here, he spits impressive lines

Bar for bar, I’m on par to spar, cigars whole preserves coming straight from jars, you get drugs like CVS, you got no buzz out of state Metro PCS

Black Milk is on the unnecessary chorus that the beat rides out to. I felt this should have featured two more verses.

11. Monster Babies
This is another “monster related” track, but I can’t hate because the beat goes hard. I’m not sure if I like the yelling samples though. Black Milk starts the track off with one of his more memorable verses as he spits,

If Hip-Hop’s dead and out, Black Milk just gave that bitch mouth to mouth.

Sean Price goes off on this as he continues with his shit-talking lyrics. I think this line may be directed towards T.I.,

I am the pick of the litter, you are a bitch that get hit and start snitchin’ on twitter, tweedle dee tweedle dumb niggas, when you see your people, better have your gun nigga”. Guilty stays in beast mode as he kills it once more, “Ayo, my food sits well, but my gun’s bulimic, watch what happens, I’m about to feed it.

I’m feelin’ all three verses here. This track is nice.

12. Shirley C
Featuring Fatt Father
Black Milk hits us with a beat that features rattles, whistles, a kick, heavy drums, a cut that mixes in the beat with a hand clap, and even a Godfather sample. Black Milk stays busy behind the boards as Detroit’s Fatt Father takes his spot in the lineup. Ruck & Guilty do a good job with their verses, but I think Fatt Father has the most memorable verse.

13. Another One
Featuring Rock & Trick Trick
Black Milk keeps it simple this time with a nice set of drums mixed with a chopped sample. Trick Trick appears as the third Detroit native to be featured on the album. However, the highlight of the tracks comes from Sean Price & Rock (Heltah Skeltah). They both have a handful of quotables on this, and their back-to-back verses really harmonize with each other.

14. 4 In The Box
This is another short Guilty Simpson solo. Black Milk begins it with another Tronic-sounding beat. He also throws in some samples about trust (beginning) and god (end). Guilty’s lyrics are good, but I felt that he could’ve come a lot better with his delivery. Still not a bad track though.

15. Outro Smoutro
Black Milk ends it with a psychedelic-sounding instrumental just like he started it. I believe this one plays out a little better.

Bottom Line:
First, I’ll have to say that Random Axe is set with Black Milk as their producer. He brings back his vintage sounds that hold down the album on its own. His style only complements Sean Price & Guilty Simpson’s limited subject matter. Surprisingly, I felt that Guilty Simpson sounded the nicest on this. I didn’t think Guilty would be able to keep up with Sean P before hearing it. Not that Sean P’s verses were wack by any means, but there was times when his delivery sounded lackluster. This is probably because he had to rerecord all of vocals after Black Milk accidently deleted them. I can see how this may be an annoyance. I felt that all guest features did a pretty good job and I like how they were all from either Detroit or New York. Black Milk needs to do a Detroit only album. I can only imagine how well Eminem, Royce, eLZhi, and others would sound on Black Milk’s production. I’ll give Random Axe credit for the album’s replay value, but I wish it was a little bit longer. This may take some people some time, but it one of the albums that only gets better with each listen.