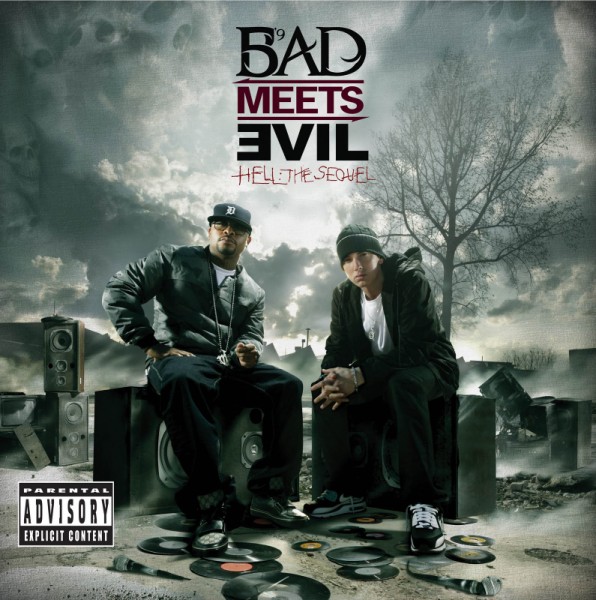 From the moment I heard about Slaughterhouse, I was amped and eagerly awaiting their work. That only got boosted when I heard they got signed by Eminem to his Shady imprint. Em’s not just buying the competition and shelving them like other big named rappers seem to be/have been doing (shots fired?). With that said, Em teams up with Royce as a duo named after a song that appeared on Eminem’s Slim Shady and a project by the same name, Bad Meets Evil. Hell the Sequel is an album to let fans know that not only are these two beyond the beef they once had, but they can put out work together. What do we get when two of the illest syllable gymnasts team up? Let’s find out!

1.  Welcome 2 Hell
Produced by Havoc
Havoc of Mobb Deep gave them a serious heater for this intro track. Simplistic in form, but ominous enough with the “oohhaaaah” in the background, as well as slight welcome changes in tone during the track, lets us know that he had a complete vision when composing this one. Eminem and Royce talk about how they pushed each other making this album and it really shows here. It’s like each time they get on the mic, they see how more insane they can make the lyrics as well as how much they can alter the delivery.

2. Fastlane
Produced by Eminem and Supa Dups
With a completely different tone, but the same neck break personality, the duo trade verses like one of the dopest sessions in the booth that you could ever hope to witness. These cats rap about living life to the fullest, going hard at all times, and not worrying about regrets or looking back while riding the beat like it was made by Harley Davidson.

–Royce Da 5’9″–
My whole goal as a poet’s to be relaxed in orbit
At war wit’ a bottle, this Captain Morgan attacks my organs
My slow flow is euphoric, it’s like I rap endorphins
I made a pact with the Devil that says “I’ll let you take me
You let me take this shovel, dig up the corpes, Jack Kevorkian”
Go ‘back and forth in more beef that you can pack a fork in
I’m livin’ the life of the infinite enemy down
My tenement, too many now, to send my serenity powers
Spin ‘em around, enterin’ in the vicinity

–Eminem—
Now, was called Eminem, but he threw away the candy and ate the rapper
Chewed him up (Pt!) and spitted him out
Girl, giddy-up, now get, get down
He’s lookin’ around this club and it looks like people are havin’ a shit fit now
Here, little t-t-trailer trash, take a look who’s back in t-t-town
Did I s-st-stutter, motherf-cker? F-ck the mall, he’s just
A whole motherfuckin’ Walmart d-d-down every time he comes a-r-r-round
And he came to the club tonight wit’ 5’9″ to hold this bitch down
Like a motherf-ckin’ chick underwater, he tryna d-dr-drown
Shawty, when you dance, you got me captivated
Just by the way that you keep lickin’ them dicks like lips, I’m agitated, aggravated
To the point you don’t suck my dick, then you’re gonna get decapitated
Other words, you don’t fuckin’ give me head, then I’m have to take it

3. The Reunion
Produced by Sid Roams
This is the album version of how Slim Shady and Royce reconnected. Over a much slower tempo than the previous cuts, Shady tells his part of the story as him being on his way to a location with a chick with him. Royce is at the location telling his side of the story on verse two. There are few things that stand out to me lyrically on this song. Slim takes more shots at the Relapse album and the accents used on it; he clearly isn’t a fan of that album in particular as this isn’t the first time he’s taken a shot at it. Another thing that I took notice of was how much better Slim’s verses were than Royce’s this time around. I’m hoping this doesn’t continue for the rest of the album…

4. Above The Law
Produced by Mr. Porter
Em and Royce give Mr. Porter the credit for really helping Em and Royce to work together again. They also credit him for beats like this that are set up perfectly for them to bring their A game. The energy on this one reminds me of tracks like Pac’s “Hail Mary”.Royce refuses to be overshadowed here as he delivers some seriously dope rhymes as well. So far, this is my favorite song.

5. Im On Everything
Feauring Mike Epps; Produced by Mr. Porter
…that WAS my favorite before this one came on. Well, I guess it still is because Royce’s first verse is terrible. He even took a shot at it on Shade 45 when asked about this song “…I’m not gon’ push myself the same way I would … that’s why you heard me playing so much on my first verse and Em came in and murdered me so bad…” He’s being honest though and I gotta give him props for that. I wonder if he thought about redoing that first verse. He did however come correct as hell on his 2nd (songs 3rd) verse and really helped bring the song up. When coupled with the sick Mike Epps sample from his stand up, this song is an instant favorite.

6. A Kiss
Produced by Bangladesh
According to Em, this song was made specifically just because they liked to go back and forth on a track and see what happens. Seems simple enough right? The track is another example of how much Bangladesh likes drumwork on his tracks. It’s really stripped down and for the majority of duration, it’s drums, high hat, and some bells. The most interesting part of the track itself is when the hook hits and other elements are introduced. The song seems to be groupie chicks in various situations with these two. From the track to the flows and subject, I’m not crazy about it, but I don’t hate it either.

7.  Lighters
Featuring Bruno Mars; Produced by Eminem, The Smeezingtons, Battle Roy
Eminem is a self-proclaimed Bruno Mars fan, who woulda thunk it? This is the most serious and real song on the album and this is an example of what these cats are really capable of. The song sounds like something you’d hear on the Marshall Mathers LP. Em talks about his very public issues with drug abuse and recovery.

People don’t usually come back this way
From a place that was dark as I was in
Just to get to this place
Now let these words be like a switch blade to a haters rib cage
And let it be known from this day forward
I wanna just say thanks cause your hate is what gave me the strength
So let em bic’s raise cause I came with 5’9? but I feel like I’m 6’8?

Royce decides to talk about his own rise to stardom and the obstacles he’s dealt with along the way.

I remember when T-Pain aint wanna work with me
My car starts itself, parks itself and autotunes
Cause now I’m in the Aston
I went from having my city locked up
To getting treated like Kwame Kilpatrick
And now I’m fantastic
Compared to a weed high
And y’all niggas just gossipin’ like bitches on a radio and TV
See me, we fly
Y’all buggin out like Wendy Williams staring at a bee-hive
And how real is that
I remember signing my first deal and now I’m the second best I can deal with that
Now Bruno can show his ass, without the MTV awards gag

8. Take from Me
Produced by Mr. Porter & “56”
It’s pretty obvious that these last two songs are made to showcase something more than just fun and lyrical ability. They want folks to know that they can get deep and change things up. They did a great job. Where the previous cut was a big recovery/inspirational type song,  this one is more of a warning and story about people who are takers. There is talk about apparent deception with friends, business associates, and so called fans…subjects that Em says happened in real life.

9. Loud Noises
Featuring Slaughterhouse; Produced by Mr. Porter
Em makes a pretty solid decision to end the EP by bringing it back to Slaughterhouse which, in my opinion, has potential to be the most lyrically mind-blowing group that we’ve ever witnessed. I think with that same focus is the reason they selected this frenetic bounce beat to spit on. You know by now that Em and Royce are right at home over these sort of beats. The scary part is to hear Joey, Crooked I, and Joell get on it and carve their own part out of the song, refusing to be outdone.  I think the best verse on this song goes to Crooked I:

–Verse 2: Crooked I–
I’m a menace villain, my pen is sitting spilling, my lyrics killing
Then I let you witness shit when it hit the ceiling
The niggas willing to give the listeners the sickest feeling
Like mixing some Benadryl and penicillin
Then I’m filling the clip with a written
Can you picture my pistol drilling?
A million women and children when I’m illing
But it isn’t real, it’s a rap
On the real, it’s a wrap
How could you possibly stop the Apocalypse
When I’m atomic bombing the populous
Shock the metropolis hostile as a kid
Popping the Glock at his moms and his pops
Then he hops in his drop with his iPod rocking the Slaughterish
Documentation and lyrics I write with confidence
Write like a columnist slash novelist
I’m in this game to demolish, establish my dominance
Over prominent rappers you popping shit till you opposite
I can spit ominous so spit politics now I’m Haile Selassie, Gandhi, and Pac of this hip hop genre, bitch

Bottom Line:
I have to commend Royce for being able to not only keep up with Em for the majority of this album, but say that he did ore than keep up with him on some songs. Dude is clearly talented beyond his recognition and the fact that Em picked him to roll with on an entire EP as well as well as sign to his label pretty much solidifies that thought. More specifically, this project not only serves as an appetizer to Royce’s upcoming project next month, but as notice to the competition. We’ve talked about it on the team evaluation series but to me it’s more clear now than ever, that this is the group to watch for. This album is a celebration of rhyming and making fun music, expression of multi-syllable flows, depth in content, and flat out ability to be entertaining. With the exception of maybe two songs, there appears to be clear thought about how they wanted to sound and what they wanted to rhyme over to complete the project. If this is supposed to be what happens when Bad meets Evil and ultimately, then hell isn’t a bad place to be at all.