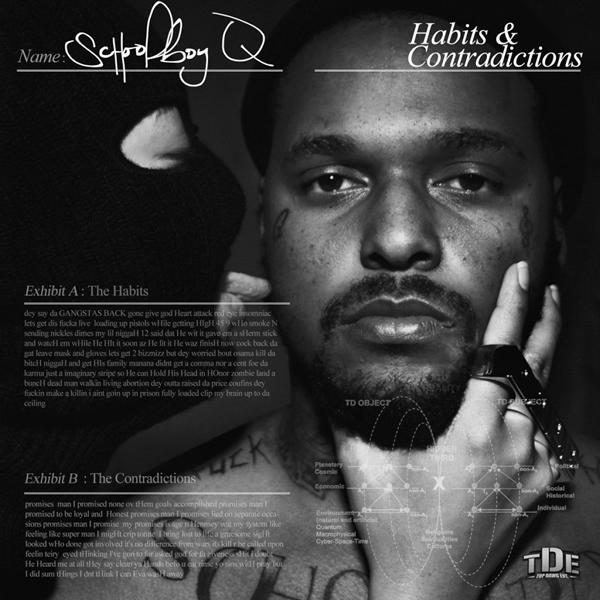 Continuing with TDE’s absolute coup d’état of the rapmosphere (Yeah I made that up), Schoolboy Q drops Habits & Contradictions, his sophomore effort and prequel to the year-old breakout debut Setbacks. Q never struck me as a great lyricist, but his charisma and flow always kept my attention and enabled him to keep up with the heavyweights in his circle. Building up to this release I noticed the almost unbelievable flip in the Hoover Crip’s lyrical abilities as he leaked tracks from HnC, the album shorthand, until it became one of my most anticipated going into the New Year. Let’s see how the Black Hippy solider holds up…

1. Sacrilegious
Produced by Tabu
A dark, barren Cowboy Western-sounding track opens up for Q to admit to his savage disregard of morality and religion. The eerie sound clips, ad-libs, and sound effects help turn this into a spazzy, suicidal confession. Lyrically, as I mentioned earlier, Schoolboy seems to have improved by leaps and bounds:

Feeling teary eyed, thinking I’ve gone too far
Ask god for forgiveness, shit I doubt he heard me at all
They say clean your hands before you eat, rest your sins with pray
But I’ve done did some things I don’t think I could ever wash away

After years of listening to Black Hippy, there’s one thing that goes unnoticed; the uncredited features are dope as hell and are proof of real chemistry between these artists. Peep Kendrick on the hook. Check the video as well. Great start and sets the mood.

2. There He Go
Produced by Sounwave
These are the tracks I really enjoy from Q. Just straight asinine, deranged, and swagged up lyrics while remaining far from simple. His voice inflections are hilarious especially as he mocks the chicks that are saying “There He Go!”. Production is a little too subtle. I was hoping the build was going to get more intense, but it didn’t. Either way I dig it.

3. Hands On The Wheel
Featuring ASAP Rocky; Produced by Best Kept Secret
The “Brand New Guys” hook up again for a “po’ up, roll up” anthem sampling Lissie’s cover of Kid Cudi “Pursuit of Happiness”. At this point, I’m willing to say Q is twice the rapper he was a year ago. His lyrics and flow have improved more than I could have asked. The A$AP boss drops a hot guest verse and sounds great next to Q (Collab tape on the way? Right after the Kendrick x Cole drops? Yeah probably not.) The beat is nice mostly because of the sick guitar riff. I will definitely be on one to this in the near future.

4. Sex Drive
Featuring Jhene Aiko; Produced by THC
Ok, first wack track of the album. I don’t even know where to start. The roadrunner beat is irritating as fuck and you can tell it’s way too fast for Schoolboy because he sounds uncomfortable. The hook is some pedestrian sex line and one of the sexiest and nicest R&B artists out right now is underused and falls flat vocally. Q’s second verse is actually dope, but by that time the experience already ruined. SKIP this nonsense.

5. Oxy Music
Produced by THC
This is straight grime. Q got a bar for just about anything you’ll see in the streets. Drugs, cops, prostitutes, money, murder, sex etc. The tone and cadence reflects and drugged out and crazed thug which is a dope feature. My problem is the boring production and lack of focus. It’s not bad at all, but nothing noteworthy.

6. My Hatin’ Joint
Produced by Mike Will Made It
I’m Sayin Doe! One of my favorite songs on the album and one of the smoothest tracks so far this year. Q proudly declares this his “hatin’ joint” and tells a chick how much better he is than her wack ass boyfriend. It’s not often that you get this side of the story out of a rapper or a male for that matter, but we’re all guilty. Standout song and two thumbs up for the Section.80 reference. “Plus yo nigga over there wit Tammy dem!”. DOPE

7. Tookie Knows
Produced by Dave Free & Tae Beast
According to the Hoover Crip himself, only Tookie knows what this mess of rambling means. I agree. It’s an interlude, so whatever…

8. Raymond 1969
Produced by Sounwave & Dave Free
Everything about this song is dope as hell. Soundwave & Dave laced up a nasty gangsta tune, complete with scratches and an ill sample, while Q drops arguably some of his best lyrics.

If you had doubts about Schoolboy Q as an artist, they stop when this song ends… “ON MY MOMMA NEM!” 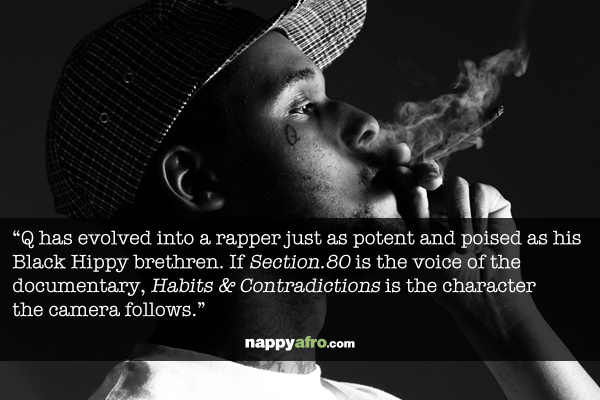 9. Sexting
Produced by DJ Dahi
This is an anthem for all those players out there that’s feeling themselves. If homie is going to make a song that’s about getting some, let it be this and not that bull from track 4. Q is lyrically sharp here given the subject matter. Dope rhymes and a nice bounce so drop it in the party and let it ride.

10. Grooveline, Pt 1.
Featuring Dom Kennedy & Curren$y; Produced by Lex Luger
I want to like this song a lot more than I do… The most abused producer of the past two years continues to prove he’s not a one trick pony and gives these three an absolute gem to work with. Everybody sounds just as groovy as the track implies, but the verses end up a little too laid back and end up sounding lazy. Don’t get me wrong, the song is great, but it wasn’t as fulfilling as the guest list set it up to be.

11. Gangsta In Designer (No Concept)
Produced by Willie B
Literally No Concept, just random raps. “Swallow evidence her boyfriend never had a clue” Ha! The army marching instrumental keeps this one interesting.

12. How We Feeling
Produced by Dave Free
Spaced out, drugged up interlude with Q harmonizing and trying to say something profound, but he really just geeked up and actually isn’t saying anything. Even though I don’t consider this a song, I like it. This is for the smoking playlist.

13. Druggy With Hoes Again
Featuring Ab-Soul; Produced by Nez & Rio
Sequel songs make you uneasy. They either leave you disappointed, running to put the OG on repeat or they completely shit on the original. This is a case of the latter. Black Lip Bastard & Q straight up destroy this ecstasy fueled mash-up of “Druggy Wit Hoes”, “F’d Up To The Beat”, and “#BETiSUMWEED”. A1 lyrics, beat, and delivery = BANGER.

14. Nightmare On Fig St.
Produced by A$AP Ty
The A$AP Mob strikes again this time with A$AP Ty giving Q an anthem to rep his hood and talk his usual shit. The hook is crack (BALL SO HARD- Jay voice) and the verses go in. This one of those songs that have the crowd going nuts at a show. Play this with the volume maxed out.

15. My Homie
Produced by Alchemist
Hell of a collaboration right here. Q tells a couple stories about homies turned against him after years together in the streets. The beat is minimalistic and strays from the frenzy that occupied most previous offerings which proves to be advantageous because Q’s bars and delivery are more easily appreciated. Good song.

16. Blessed
Featuring Kendrick Lamar; Produced by Dave Free
I’m pretty sure all the Kendrick stans were itching to get their grubby ass hands on this one. Well I hate to disappoint you, but Schoolboy Q fully eclipses Kendrick Lamar on one of the most epic “against all odds” songs in recent memory. Not to say Kendrick didn’t go off as usual, he did, but Q fed raw emotion into his verses and you can’t deny it. Dave crafted an unparalleled track, one unlikely to drop from my top 5 this year even though it came out in January. Ab-Soul drops in for a quick bridge to seal the deal. Best track off the album and easily my favorite song in a while.

17. NiggaHs.already.know.davers.flow
Produced by Nez & Rio
The album should have ended on the last track, but this song is still pretty good despite poor sequencing. More swagged up rhymes from Q over an average track. The hook isn’t terrible so I ain’t mad.

18. 2 Raw (Bonus Track)
Featuring Jay Rock; Produced by Tae Beast
This actually should have replaced a song on the album seeing how hard it goes. Q and Jay Rock drop some solid bars on an understated banger from Tae Beast.

Bottom Line:
I always thought Schoolboy Q was the weakest link in Black Hippy. Ab-Soul had the thought-provoking subject matter and lyrical dexterity, Kendrick Lamar was just too real not to relate to, and Jay Rock had the gangsta lifestyle down to a science. However, Q just seemed undeveloped. Well, Habits & Contradictions is his welcome into the ranks of a great rapper. If Section.80 is the voice of the documentary, Habits & Contradictions is the character the camera follows. Moving from acts of sacrilege to faith in blessings with everything encountered in between, the Hoover Crip nails every concept drawn for this album as well as making his superficial, braggadocios songs easy and enjoyable listens. From the stifled, muddled Setbacks style that hardly conveyed the message at hand to a clear and vicious depiction of his mind state, Q has evolved into a rapper just as potent and poised as his Black Hippy brethren. While retaining his Habits, Q seems to have left all criticism as Contradictions.