How Good Can Anthony Davis Be? 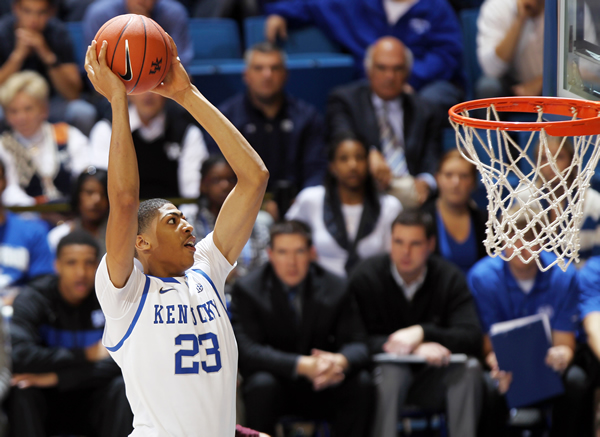 So with the NCAA tournament over, and the NBA regular season winding down, a lot of people are starting to set their sights towards the NBA draft in July. The name that everyone is excited about is Kentucky’s freshman phoenom, Anthony Davis. His stats won’t jump off of the page to you, but he has shown some real ability to control the paint, so in essence control the game.

The stats above aren’t really anything to get excited about, right? Wrong! The thing that is special about Davis isn’t how many points or rebounds he gets but how he gets them. At 6’10” (and growing) he is the most fundamentally sound college player we have seen since Tim Duncan. That speaks to his work ethic enormously, because three years ago he was a guard. I played ball in high school, and I couldn’t imagine going from learning how to run an offense, and playing on the perimeter to going inside to bang with the big boys. The fact that this is relatively new to him, and he looks like the best young prospect in the country would seemingly make him a legit #1 pick.

The thing that worries me about the youngster is the fact that he is small by NBA standards. NCAA says he is 6’10” so he is probably 6’8 ¾” or 6’9” according to the NBA measuring sticks. Remember everyone was saying that Michael Beasley was 6’10” and some reports even had him at 6’11” and he turned out to be 6’8”. If Davis is still growing though that’s not as big as a deal as his frame, he is similar to Durant in body structure. Trying to play the 5 in the NBA will not work with this size.

In actuality, I think that Davis will be a very good player, but not right away (If he comes out this year). He will probably be forced to play Power Forward in the league, which is probably beneficial to him. He does have the skill set to play inside, and be one of the best inside presences defensively in the league. Offensively however, he is a better fit to play on the perimeter. He may even be able to play a hybrid- Point Forward type of position in the league. That makes him deadly! Imagine if you have a player like Blake Griffin, Kevin Love, or even Tim Duncan having to guard this guy at the top of the key with the ball in his hand. He becomes a match up nightmare. If teams decide to try and put a perimeter player on him than there is a huge mismatch somewhere else on the floor.

He won’t be Shaq, Duncan, Kareem, or Wilt. He will be more of a Hybrid of one those players, and Scottie Pippen, or LeBron James. He will be able to dominate defensively in the paint, and run an offense with the ball in his hands. Before any of this happens though, he needs to gain some weight. Get stronger and he can be a franchise player.