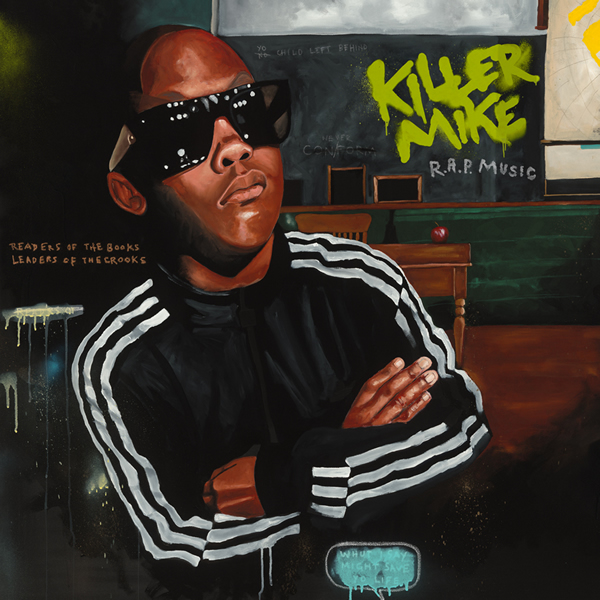 If you’re not familiar with Killer Mike you might need to go back to some old Outkast tracks and pay closer attention to the feature credits (“Snappin and Trappin’” & “The Whole World”). First getting his start with fellow ATLien Big Boi, Mike was first signed to Boi’s Purple Ribbon record label. And as rap clichés goes they had a falling out after years of collaborating together. But Mike kept his name in the game releasing the critically celebrated Pledge series. Now here we are at album number 6 and Mike Bigga is still determined to bust some skulls with new material. Let’s see what the damage is…

*Each song produced By El-P

1. Big Beast
Featuring Bun B, T.I., & Trouble
Without wasting a nanosecond Killer Mike beats you over the head with his vicious flow with lyrics to match. “Hardcore G shit/Homie I don’t play around/Ain’t shit sweet about the Peach, this Atlanta clown!”. This song could have been flawless if it went one of two ways. First it could have been a great introductory track without any features. Not that Bun B has ever brought down a song with his presence. Or two, it could have been a great Atlanta anthem with T.I. and another ATLien featuring. Speaking of Clifford it seems he’s channelling T.I.P. on this one.

But if we’re not splitting hairs then this track is what N.W.A. would sound like if they were together today. Listen to this and try resisting the urge to tear shit up.

2. Untitled
Featuring Scar
Race, religion and legends, inside and out of rap music are topics that Mike tears through in just under 4 minutes. These 3 verses he kicks are some of the best I’ve heard in a while. Not to build the song up too much but this is Mike Bigga (What happened to that name by the way?) saying it straight from the heart.

3. Go
Like your songs short and sweet? Clocking in at only 2 minutes Mike gets the job done quickly. The moral of the story being told? Don’t fuck with the outcast of Outkast. The beat is on point. Killer Mike’s flow is flawless. ‘Nuff Said.

4. Southern Fried
Here’s an anthem for below the Mason-Dixon line. Sure it’s southern but it doesn’t compromise the quality of the track by having simple verses or a dull chorus (Remember Dem Franchize Boyz? Yeah me neither). No, Mike shows us his way of life and how things go from his part of the country. The chorus sounds Curtis Mayfield inspired while El-P’s beat is intricate and fun.

5. Jo Jo’s Chillin’
Speaking of fun here’s “Jo Jo’s Chillin”! What a great track. Things get taken back to the old school with El-P’s simplistic beat and Killer Mike’s amazing story telling abilities. The story being told here is a hilarious one about a character named Jo Jo attempting to skip ATL and head to New York City. It goes from bumping into Ghostface Killah at the airport to setting up an old lady in the security line that’s trying to rat him out to banging an airhostess in the aeroplane bathroom. Give this track a listen (or 5). It’s too funny.

6. Reagan
Okay people, the fun stops here. Couldn’t last forever having Mike as the captain. And I don’t mean this song is a drag. What I mean is this song is real. There are no choruses and no BS. The track opens with an announcement from President Reagan talking about the Iran-Contra Affair. The two verses are broken up with another speech from Reagan contradicting what he expressed in the first one. But onto the lyrics. You couldn’t expect anything less then militant from Mike could you? Especially with his opening lines of the song referencing Malcolm X. We really need to pay close attention to these lyrics. I just learned 5 things I didn’t already know by listening to this song! Mike you’re a genius.

7. Don’t Die
Mike has defiantly channelled a young Ice Cube for this fuck the police anthem. In fact it’s so N.W.A. inspired somebody needs to go back in time and give teenage O’shea a royalty check. But he does all this in great honesty admitting that his own father was a cop and these corrupt police bring a bad name to the force. Mike can say more in song then what rappers today say in one album. While telling a very graphic story about cops invading his home he manages to make references to a lot of issues and people (Public Enemy, Larry Davis, Assata Shakur, the movie Strange Days, Guantanamo Bay). This is more then a storytelling song, it’s a history lesson. 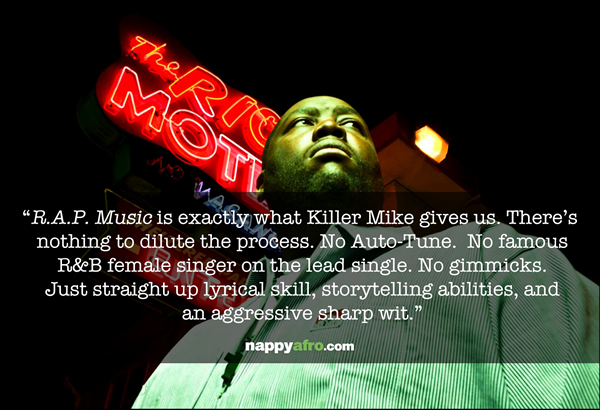 8. Ghetto Gospel
The first thing that I noticed about this song was the beat. This whole time I haven’t been able to stop bobbing my head and this is no exception. Mike is relentless with his political stance and there is nothing wrong with that. This album is shaping up to be something revolutionary.

9. Butane (Champion’s Anthem)
Featuring El-P
One thing that’s been made clear this far into the album is the production has a lot of meat on its’ bones. This song has that kind of bass you could hear coming from a kilometre away. If you have the sound system in your car that can handle bass then bang this one. The interesting thing is El-P actually appears on the track with a verse all to himself. Mike does outshine El mainly due to the two of them playing their respective roles. My neck is getting really sore from listening to this album.

10. Anywhere But Here
Featuring Emily Panic
I would really enjoy collaboration between Mike and Big Boi again. I’m sure they’ve buried the hatchet but probably aren’t on recording together terms just yet. Anyway I could see great chemistry between these two on this track. Again if you’re looking for a fun club song this isn’t the album for you. Obviously Mike has been looking at the world in a cynical way. And he probably has a right to. Mentioning things like the Sean Bell murder. You can hear the sadness in his voice. This is what makes Mike a great artist: pure honesty. But don’t listen to this if you’re having a bad day.

11. Willie Burke Sherwood
To describe this track would be to say, inspirational. Mike runs through the moments and the people of his life that have shaped who he is today. It’s inspiring due to the fact that he says one of the reasons he grew as a person was because he read. Mentioning Lord of the Flies and saying he related to the character Jack. It sounds like Kanye could pop up at any minute and put his 16 bars in or even show up on a production credit. But as Killer Mike said a few tracks back “This album was made entirely by Jamie and Mike.”

12. R.A.P. Music
As you can imagine this song is an ode to the music that has gathered us all here. “R.A.P. Music” dummy (Rebellious African People). Killer makes sure all these great artists are mentioned (Aretha Franklin, Jimi Hendrix, Curtis Mayfield, Miles Davis, George Clinton) as an ode to the pioneers of rap music (Yes these people did help make this genre of music possible). Ironically though El-P avoids the boom bap sound for a more electronic melody, which actually works quite well.

Just check out part of the chorus:

This is jazz, this is funk, this is soul, this is gospel!

I’m really glad Killa Kill didn’t end this album on a down note and instead busted us over the head with a tribute to something he loves very much.

Bottom Line:
R.A.P. Music is exactly what Killer Mike gives us. There’s nothing to dilute the process. No Auto-Tune. No famous R&B female singer on the lead single. No gimmicks. Just straight up lyrical skill, story telling abilities, and an aggressive sharp wit.

Mike shows his diversity with tracks like “Jo Jo’s Chillin” then bounces to a dark, ominous political thriller of a track like “Reagan”. Also with songs such as “Don’t Die” Mike’s skill to paint pictures with words is made very much apparent.

Using just one producer is genius! Reminds me of albums that were made in the old school. The chemistry between each person shows, instead of making an album with a different super producer on each track. El-P has a great range of beats and sounds that it doesn’t sound like the same producer for every song.

I’ve heard some people saying this is the best Southern Rap album this year but I really think that’s underselling it. State lines and area codes shouldn’t be a factor in judging this album. This album has the potential of being one of the best R.A.P. albums of the year, period.