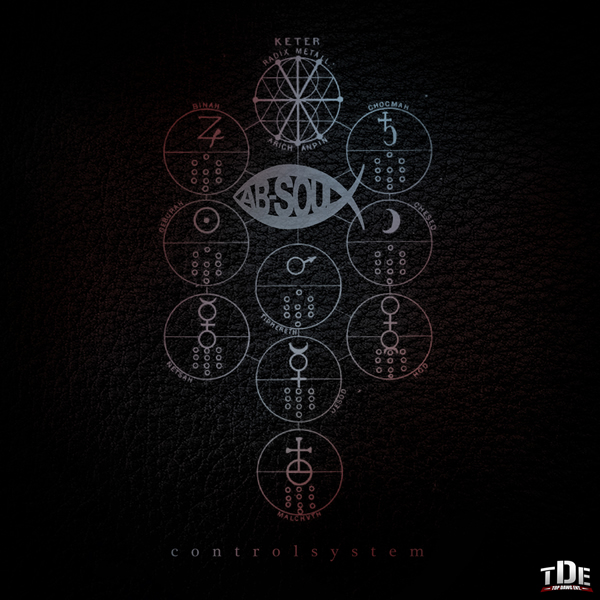 I am not going to give you this hipster intro. I have not been listening to Ab-Soul since he used to roll blunts for Kurupt in ’96. I do not possess any of his unreleased work. I do not even own or really listened to any of his previous mixtapes. I just know “Ab-Soul’s Outro” from Kendrick Lamar’s debut album and some other features. Aside from that, I am oblivious to what the soul of Ab-Soul has to give. That is why I am wondering what this Control System is about.

1. Soulo Ho3
Featuring Jhené Aiko; Produced by Sounwave & Dave Free of Digi+Phonics
“Are you ready? I am because it is all about control”. The beautiful Jhené Aiko assists the introduction. She tries, as she has many times, to make a song memorable. She falls short yet again. There are many tracks that her assistance is not really needed. This is just adding to the list. She is no Jaguar Wright. Ab-Soul delivers solid lyrics but he could have done this by himself. If he is going to be the secret weapon of TDE, he going have to hold his own. The audience likes minimal and strategic features.

2. Track Two
Produced by Taebeast of Digi + Phonics
Does this song sound familiar to you? Yeah, the beginning of this track was similarly voiced on “Ronald Reagan Era” on Section.80. I do not like the fact we are recycling lyrics? We need to leave that to Lloyd. Is this a cover album? Is he going to do “Gin & Juice too? I love that song. But really the track could not end soon enough. It should have kept with the theme and only been two minutes. It did not grab the attention of the audience in a positive manner.

3. Bohemian Grove
Produced by Taebeast & Dave Free of Digi + Phonics
This is the type of track that was needed to get the album on the right foot. It reminds me of “Hennessy Beach” with a splatter of conscious rap. Ab-Soul shows off his unique delivery to match with the harmonious production. The anticipation for the next track is built up with the chattel speech at the end. Where is he going with this?

4. Terrorist Threats
Featuring Danny Brown & Jhene Aiko; Produced by Dave Free of Digi + Phonics
Here goes everyone’s favorite track on the album. I have had my ears to the street. Did he manipulate a Biggie chorus to make the audience slightly familiar song and give it a universal sound? Hasn’t an artist already done this recently for his debut album? Yes, it was Kendrick Lamar. You can see it perfect on the track “Blow My High”. But Danny Brown happily assists “Terrorist Threats” and Jhene Aiko could not even bring this song down. The heavy bass keeps your head knocking and want you to pick up a pitchfork and start a revolution. “I ain’t finna to be no one chattel”.

5. Pineal Gland
Produced by Taebeast of Digi +Phonics
The horror-themed keyboard changes the mood significantly for the album. This is not good either. There is even a 2 Chainz reference. That is not Soulo’s lane at all. You should just listen to “Terrorist Threats” again and skip this one. I did not even know the pineal gland was the third eye until doing some research. Ab-Soul’s eyes were swollen shut because of Steven Johnson’s complication for three months. That is more entertainment than you will get from this song.

6. Double Standards
Produced by Sounwave of Digi + Phonics (Additional Guitar by J. Valle)
Ab-Soul taps on a subject that is overlooked in misogyny. He might not be the Brian McKnight of singing but he held his own on the hook too. That Amber Cole reference should be added to the Constitution.

7. Mixed Emotions
Produced by King Blue
This is the banger the audience was looking for the summer. This is a perfect poolside track in this global warming weather. It is all about a good time no matter what your vice is. Ab-Soul’s vice is lean by the way. The mood changing with BJ the Chicago Kid is the ultimate way to end a track.

8. SOPA
Featuring Schoolboy Q; Produced by Nez & Rio
This song was created for Schoolboy Q not Ab-Soul. It sounds like the track left on the cutting room floor before deciding on the beat for “niggaHs.already.know.davers.flow”. I did not witness it but that is the image I got. The connection between the two West Coast rappers shines at the end and wants you to “don’t stop and get it, get it”. That is in the most heterosexual way possible.

10. Illuminate
Featuring Kendrick Lamar; Produced by Skhye Hutch
Ab-Soul did the impossible on this one. Many times it has been attempted but not one artist has accomplished such a feat. Ab-Soul went toe to toe with Kendrick Lamar without getting overshadowed. Yes, Kendrick Lamar might have made gun sounds in a middle of a track that makes Waka Flocka’s name look even more foolish. But TDE is strong all around. There is not a flat tire on this well-oiled machine.

11. A Rebellion
Featuring Alori Joh; Produced by Curtiss King
We see a totally different side of Ab-Soul with “A Rebellion”. He voices his personal thoughts and slows down the tempo of the album for a brief minute. He is not alone with this one no matter what he says.

12. Showin’ Love
Produced by Willie B of Digi + Phonics
The sound of that hi hat is quite annoying. I never liked it and never will. It just displays mediocrity and laziness from the producer. Is there a bomb in my room? Is my watch ticking that loud? Did I forget to turn the stove off? I will just turn this song off.

13. Empathy
Featuring Alori Joh & Javonte’
The change of the tone of Ab-Soul makes for a level track to enjoy. Alori Joh’s vocals fit nicely to make a good pairing.

14. Nothings Something
Produced by Aahyasis
The simple production of the constant bass appeals to the audience. It might not be the longest song but it gets its point across. It is always something

15. Beautiful Death Featuring Punch & Ashtrobot; Produced by Skhye Hutch
Here goes another rebellion track from Ab-Soul about America. He brought along Ashtrobot and Punch to show he is not alone on this movement. It is a slight different message but still the results are the same. America is not good and it is all going to end soon. Thanks, Mayans.

16. The Book Of Soul
Produced by Tommy Black
“The Book Of Soul” makes me feel like I just walked into the Cotton Club. Soul shows his vulnerability again about losing his first love in Alori Joh. I felt I should snap in approval at the end for the authenticity. The soul definitely shines through.

17. Black Lip Bastard
Featuring Jay Rock, Kendrick Lamar, & Schoolboy Q; Produced by Willie B of Digi + Phonics
A crew track is a good way to end this album. It makes you think that they can go toe to toe with Slaughterhouse. Yeah, I said it.

Bottom Line:
It is not the album of the year. It still has the sound of a mixtape with the recycled lyrics and hooks of other accomplished artists. Kendrick Lamar did it once and succeeded. We do not want to recycle a recycle. I know we are going to green but let us not get out of hand. Yes, there are some standout tracks that are album material. But there are some others that you wish never hit your iTunes library. I control the power to delete the throwaways and keep the standouts. That is what I will do too. It is my booming system.