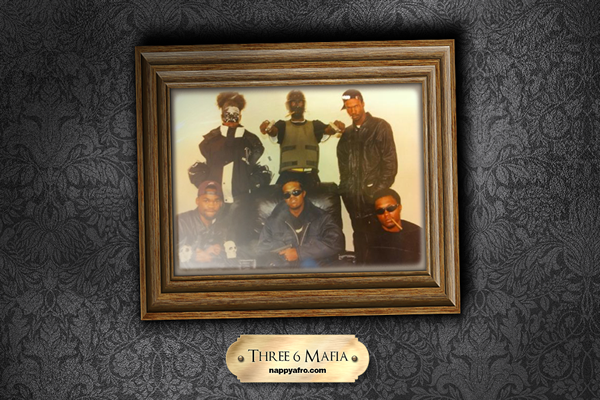 What up guys? Since Three 6 Mafia is one of my favorite groups of all time I felt like I needed to make a mixtape of my collection all of their material. Most people know Three 6 started out with 6 members: DJ Paul (Born 1977), Juicy J (Born 1975), Gangsta Boo (Born 1979), Koopsta Knicca (Born 1974), Crunchy Black (Born 1975), and Lord Infamous (Born 1973) and now it is only DJ Paul & Juicy J. But before they was Three 6 Mafia they was known as the Backyard Posse but even before that it was only DJ Paul, Juicy J & Lord Infamous which they became Tear Da Club Up Thugs later on in the late 90’s, which was a dope album by the way.

I know they had dark sounds but that was the sound of Memphis and they are the originators of the trap, crunk buck type of music. They was doing them type of beats in the early 90’s while they were teenagers. Whenever people speak about crunk or southern Hip-Hop you have to give Three 6 Mafia, DJ Squeeky & Zirk (Three 6 Mafia rivals at the time), Tommy Wright III, Gangsta Pat, 8Ball & MJG props.

Anyway on track number 1, “Now I’m High”, I decided to let people know who didn’t know that Lil’ Fly (Born 1977) was on the original version. It is 3 parts of this song. Part 1 which is on this mixtape is originally on Smoked Out Loced Out Tape (1994) by Triple 6 Mafia, Part 2 is on DJ Paul’s Underground Volume 16: For Da Summa Of 94, and Part 3 is on Mystic Stylez (1995). They ended up re-releasing Part 1 on Triple Mafia Underground 1991-1994 (1999) album by taking off Playa Fly aka Lil’ Fly verse’s, and Part 2 end up being released on Koopsta Knicca’s re-released album Da Devil’s Playground (1999 but originally 1994) and they took off Playa Fly’s verse off of Part 2 on the remastered edition since he was no longer part of the crew after 1995. Three 6 Mafia dissed him on “Gotcha Shakin'” which is one of me & King Jerm favorite song, Playa Fly dissed them first on “Triple Bitch Mafia” and “Triple Bitch Mafia Part 2”.

All the songs I have that say Juicy J feat….. Well these songs are from Juicy J old mixtapes which he produced all the beats but he had guest features rapping their own solo song over his beats. Track 3, 4, and 7 are from Juicy J’s Volume 9 (1994); dope tape to me.

By the way out of the whole group over the years, Project Pat, Homicide, Gangsta Boo, MC Mack, Lord Infamous, T-Rock, Skinny Pimp, and Juicy J are my favorite rappers. I like everybody else but they are my favorites overall with Crunchy Black always being the weakest link to me.

The song “Midnight Hoez” is from Lil Gin’s Shake Junt EP (1995). Kingpin Skinny Pimp ripped that shit like he always do on a lot of songs he rapped on from 93-96. Actually Skinny started music with DJ Squeeky (Paul & J’s rival) but they started beefing which end up serious to where somebody almost got killed so Skinny started rolling with Triple 6. Back to the songs, “Midnight Hoez” end up being remade on Skinny first LP King Of The Playaz Ball (1996) Produced By DJ Paul & Juicy J. I like this version a little better than the ’96 version though, it sound way more funkier.

“She Goin'” from Juicy J’s Greatest Hits Tape (1995) featuring MC Mack from Killa Klan Kaze and Nigga Creep (Project Pat & Juicy J’s cousin who got murdered from a robbery in 2000). Another version of “She Goin” which is MC Mack solo where he rap two verses appears on MC Mack’s Pimpin’ As A Mack (1995) Produced by Juicy J. I’ll include that version on the next installment, it’s on the same beat though. MC Mack was dope as fuck to me back in the day, not his new music though.

“Drinking On The Alize” is from the first tape DJ Paul & Juicy J ever done together which is called The Beginning (1993). They were both young but of course DJ Paul always sounded older than what he was and Juicy J sound’s the same like always. They sampled Al Green on this and the hook come from Juicy J song “Bring It On” feat. Lyrical Dope from Juicy J’s Volume 7 (1993) which I’ll probably put on the next mixtape… I’ll decide if I do another mixtape after… Not really sure

“Slob On My Knob” (Original Version) is from Juicy J’s Volume 6 (1993). Same lyrics as the Tear Da Club Up Thugs’ version only thing that is different is the beat. The beat is made the same way but it is just the beat only no type of pianos or samples or anything being played. Only thing you hear is the hi hat, snare, open hat, and kick.

“EZ Come EZ Go” is from MC Mack’s Pimpin’ As A Mack Tape (1995). I put up the remastered version…. The original tape version I have has Juicy J talking on the beginning.

“Back Against The Wall” is from the original release of Mystic Stylez (1995). The beat kinda sound like some Bone Thugs N Harmony stuff (Back then they were beefing with Three 6 Mafia). Jay-Z’s “Show Me What You Got” use the same saxophone sample, also Public Enemy used it too. It’s hard to find this album to be honest, the only version they have is the one with newer songs on it and some of the original songs are arranged differently yet some are taken off. I bought the original CD a long ass time ago and still have it. Paul & Juicy signed it for me in 2008.

“Go To Church Part 1” is from Juicy J’s Volume 10: Chronicles Of The Juice Mane (1994) don’t get confused with the 2002 version of Chronicles Of The Juice Mane, this is the original shit. The hook always have me cracking up. Like I said before I always liked MC Mack and dude be ripping on that pimp shit. I don’t understand why DJ Paul & Juicy J never pushed MC Mack hard along with his group Killa Klan (K-Rock & Scan Man) later Project Pat joined the group after K-Rock left. Skinny Pimp talk at the end about some chicks he broke financially from pimping them and shit like that.

“Make A Stang” (Original Version) is from DJ Paul & Juicy J’s Volume 3: Spring Mix 95. This version has Scan Man of the Killa Klan at the end after Juicy J verse. On the Underground Volume 3: Kingz Of Memphis (2000) it doesn’t have Scan Man’s verse. By that time after When The Smoke Clears & Hypnotize Camp Posse album released early that year, Killa Klan had left Three 6 Mafia so that’s why they took off Scan Man’s verse when the Underground Volume 3 dropped.

“Step Up To Dis 9” is from Carmike’s Comin’ At Yo Azz Tape (1994). Carmike is part of Three 6 Mafia extended family at the time name Gimisum Family which also had Skinny Pimp & Lil’ Gin. Juicy J produced all the beat’s on Carmike tape. He Chopped & Screwed himself on the hook

“Don’t Try To Test My Nuts” by Lil’ Jule’s Ashes II Ashes (1994). This song is produced by DJ Paul also on the hook. This tape sparked conflict with DJ Squeeky & DJ Paul since they were already beefing over DJ Paul sampling his music on their songs and both of them did beats for Lil’ Jule’s EP tape which did not make the situation better.

“Suck A Mean Dick” is from Juicy J’s Volume 8: Escape From Hell (1993). Basically he telling people to fuck off

Project Pat ‘s “Niggas Got Me Fucked Up (Original ’93 Version) is the same as the Ghetty Green (1999) version but the beat on Ghetty Green sound much more polished. But the way the sample sound and the lyrics are the same. I love Ghetty Green version better though. The 93-2001 version Project Pat is one of my favorite rappers for real.

The song “Insane” is something I just threw on real quick is from Gangsta Blac’s Breaking Da Law tape (1994) produced by DJ Paul.

Sorry for writing all this shit but I’m a super big fan of Three 6 Mafia. I miss the underground days of the 6 double 6 when they were thick and had the real goons on their team. If I decide to make another mixtape maybe I’ll include songs from the original Koopsta Knicca tape, DJ Paul volumes 12, 14, 15 & etc, Juicy J volume 6, 7, 8, 9, 10 & etc, DJ Paul & Lord Infamous, Mc Mack, Lil Fly, and etc.

Since I have so much stuff going on in life I’ll have to see about the next 2Pac mixtape along with the unreleased & original mixtape of various artist. Thanks for checking out! Continue to support and enjoy this free shit!!!!