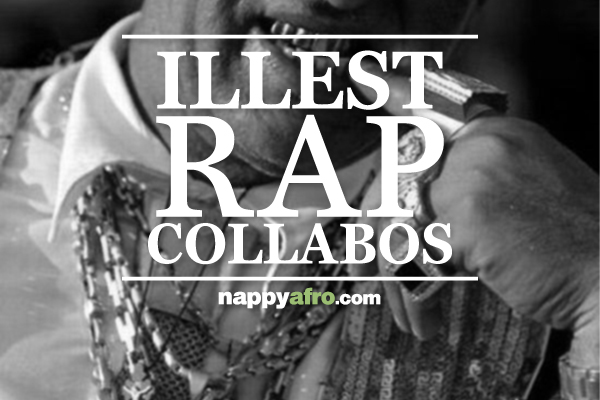 Okay maybe not the “illest” but right up there. I’ve always been a fan of collabos in Hip-Hop (Especially back in the day) because they were an opportunity for rappers to compete against each other lyrically with other rappers they respected; unlike collabos today which are pretty much commercially driven, with no lyrical competition of any sort. I don’t know if rappers today are intimidated by competition like that or they just don’t give a fuck but I’m tired of hearing any combination of YMCMB/MMG and 2 Chainz cameo. Oh well…

Below are 5 of my favorite rap collabos. These are not in any particular order and do change from time to time.

Pete Rock feat. Raekwon, Prodigy & Ghostface Killah – “The Game”
All rappers came hard (pause) on this one. My favorite joint on the Soul Survivor album. Perfect harmony between rhymes and beat.

Raewkon takes home the “best verse award” on this one.

Fab 5 (Heltah Skeltah & OGC) – “Leflaur Leflah Eshkoshka”
This joint is on some serious dope shit. I love the chill humorous vibe with on point lyrics. When I first heard it back then I was hoping for a Fab 5 album. Eshkoshka!!!

Wu-Tang & Onyx – “The Worst”
Well it wasn’t the whole Wu Tang crew but it was great to hear a track from 2 of nicest groups at the time do a song together. The video is great too.

Crooklyn Dodgers (Buckshot, Masta Ace, & Special Ed) – “Crooklyn”
Even though the word is greatly misused, this does not apply here: This is right here is “classic”. ‘Nuff said.

Craig Mack feat. The Notorious B.I.G, Rampage, LL Cool J, & Busta Rhymes – “Flava In Ya Ear (Remix)”
The beat is dope. The lyrics are dope. What more can I say? This is one song I can’t get tired of. What I am tired of hearing though is that LL verse; What the hell was he going on about?

Lost Boyz feat. A+, Redman, & Canibus – “Beasts From The East””
This track is a great display of lyrical fitness. The beat is quite straightforward, putting all emphasis on the lyrics… and the lyrics did not disappoint.

“I grab mics and push niggas to the left so fast their hearts end up on the right side of their chests.” – Canibus