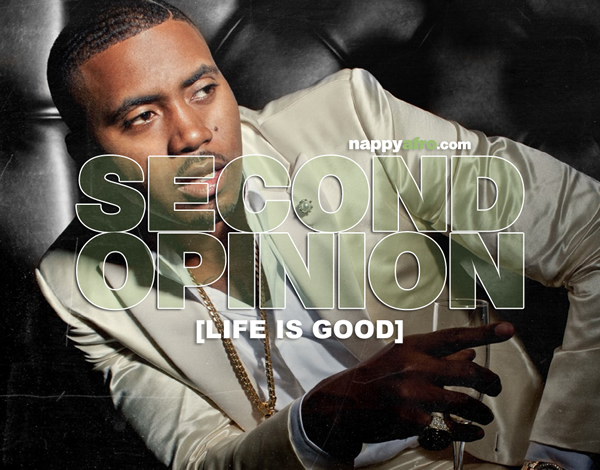 With that being said, a review of this magnitude deserves further discussions. And what better way to do this than by dusting off the Second Opinion column and letting some more crew members give their two cents. – B-Easy

Cornell Da Gr8
Life is Good is about three times as long as Illmatic. It is probably the best album for him since he released that April 19, 1994. Heartbreak brings the best music out of people. Look at Adele’s 19. Look at Marvin Gaye’s Here, My Dear. Look at Amy Winehouse’s Back to Black. Fans have a Hip-Hop version of the breakup now with great music.

Nas finally got the point. Stand out production is what makes the fan want to listen to every word. That is why Rick Ross has a stable fan base. The Bawse probably helped him choose some of the production on Life is Good. Everyone will like to thank him for them. I have a hard time finding a blemish on this album. I would give it a five star but it is hard to call it perfect. I had a teacher the same way last semester. He would give you a 95 if you follow directions perfectly. But he only gave out the other five points if you did absolute exceptional work. I never got those five points. I would give this album a 4.7 but we do not give those out around here. All 5’s and 0’s around here.

H20
History has shown great work often comes at our lowest point. The fallout from the Kelis break-up and problems paying back taxes had everyone counting Nas out before Life is Good was even mentioned last year. Nas, however, will be quick to prove the naysayers wrong with his first solo album in four years. Life is Good is a masterpiece and easily the best album of the year thus far. Sporting lyricism so intricate the album could’ve been called Illmatic 2, Nas touches on life after love, hardship, and discouragement, sealing it all in an encouraging package whose theme is nothing more or less than life goes on. The classic debates will rage on for this album as they usually do whenever Nas’ albums come out. Nas himself described this album as a magic moment in his career, and I agree. Life is Good is a celebration of life and exemplifies what makes Hip-Hop stand out as an art form.

B-Easy
Grown Man Rap. That’s one of the responses I’ve been giving when people ask what I thought about Nas’ Life Is Good. Since Nas entered the rap game at age 16, we’ve seen him grow through his music; an album from him almost 25 years later dealing with subjects like raising children or dealing with divorce or dating a woman who’s 20 years younger seems all too appropriate. The album is a snapshot of Nasir Jones’ life right now; a man comfortable with his place in Hip-Hop while not trying to go after trends to stay relevant. From the old soulful beats & samples provided primarily by No I.D. & Salaam Remi, Life Is Good shows Nas doing an album on his terms and succeeding.

Arkitekt
After my first listen, I was slightly disappointed. My first thought was it’s no classic. There felt to be too many R&B type tracks. Plus the track with Swizz was flat out terrible. There was supposed to be beats by Premo, Kanye, RZA, Big K.R.I.T., Pete Rock, etc. but instead we get this dry, unoriginal beat and a shitty verse by Miguel. And I’m not even going to mention Swizz on the hook. After a few more listens, the album grew on me. I along with so many other Nas fans need to realize he is not making those raw early 90’s records anymore. Nas has matured and his music has too. Tracks like “Daughters”, “World’s An Addiction”, and “Bye Baby” prove this. Nevertheless, Nas can still body a beat as well. Take tracks “Loco-Motive”, “Accident Murderers”, “The Don”, and “Nasty” for example. Lastly, No ID and Salaam Remi need some recognition for shaping this project to perfectly fit Nas’ state of mind. Overall, an album that gets better with each listen. Went from a 3.5 to 4 to now 4.5. So what’s next for the best free agent in the game?