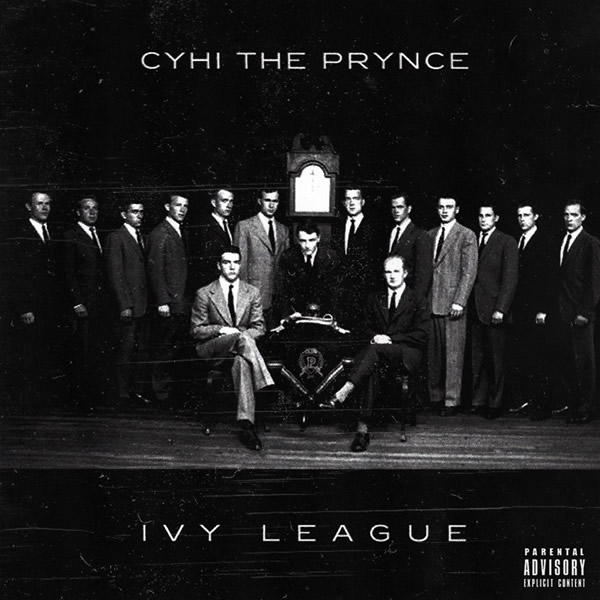 CyHi The Prynce is in G.O.O.D. Music. He might not have made a brief cameo in the “Mercy” video but he is part of the movement. Beyonce actually told Kanye West to sign CyHi to G.O.O.D. Music. So should we be thanking her or hope that she never starts a label? We will let the Ivy League decide. I am named after a prestige Ivy League university so I thought it was only right for me to do this review.

1. Intro
The mixtape begins with a Lean On Me sound bite. It works for the project. There is not much to say hear.

2. Ivy League
Featuring Promise; Produced by Mike WiLL Made It
The title track is not the worst way to start off the tape. Promise adds a nice element to the track. She probably should have sung the chorus instead of CyHi. He is quite gimmicky with his punch lines from start to finish which prompted me to start to do this:

“I get my loud from Cali, my mid come from Phoenix or San Diego on the block like a Lego.” – CyHi Citations

3. Prynceton University
Here is a little Princeton welcome video sound bite. That is cool. I am sure more scholastic punch lines are coming.

4. Honor Roll
The production is quite thematic. It sound like it should be on the Lord Of The Rings soundtrack. The Prynce switches his flow with a faster paced and it works. The singing chorus or concept does not sit well though. Why would you ask a stranger to hold your cup? Have you heard of roofies? Do I look like a servant? Hold your own cup. You are your own man.

5. A-Town
Featuring Travis Porter & B.o.B; Produced by Anthem
This is the new age “Welcome Yo Atlanta”. This is what the mixtape needed right now. I was about to transfer to University of Phoenix. This is an upgrade to “Welcome To Atlanta” with the Braves anthem sample. B.o.B definitely ends the track correct. He makes me want to be from Atlanta.

6. Slick
Produced by Beat Billionaire
There is a small drop off for the mixtape with “Slick”. CyHi is getting into his element though. This one could be a trunk rattler if played on the right Bose system. He sticks to the concept and makes it work.

7. Real Talk
Featuring Dose; Produced by Lex Luger
I have come to the conclusion CyHi The Prynce cannot create a complete song now. He suffers from the same syndrome as Jae Millz and Vado. He has all the symptoms and more with a lot of lines lacking complexity.

8. Ivy League Skit
I don’t recognize this sound bite . I cannot speak on it. It makes sense though. (Editor’s note: School Of Rock)

9. Food Savers & Scissors
Featuring ScHoolBoy Q; Produced by Beat Billionaire
Cyhi The Prynce is a trap rapper now. I did not see that coming. I recognize food savers as being the cheap brand of sandwich bags. The bargain brand one that you fold over with a flap. The only reason to listen to this song is to hear ScHoolBoy Q deliver as usual.

“Just the other day I sent my girl to the Target, for some tissue and some soap for our apartment.” – CyHi Citations

10. Tool
Featuring Pill & Trouble; Produced by Illusive Orchestra
It is hard to go wrong with a Sade sample. The chorus on this one is not bad. The remix of the original makes it bearable. Trouble and Pill was the right person to tap for a feature on the song. They fit right in.

11. Drank & Smoke
Featuring Big K.R.I.T. & Yelawolf; Produced by CKP
CKP brings down the tempo of the mixtape with the production on this one. It fits for theis slew of people though. Big K.R.I.T. and Yelawolf step in to make you forget CyHi citations. There is no need to expose the flaws all the time. Yelawolf excels at what he does. Big K.R.I.T. is king and CyHi should not even be a prince. He fits more so in the jester position.

12. Bachelor
Produced by Cozmo
He can choose beats though. I will give him that. I never really heard of these producers but they had the foundation laid perfect. CyHi just could not make the house. He makes more comical lyrics and I bet he doesn’t know it.

“I wish I had a girl to cook a nigga dinner. But I don’t so I got to order wings.” – CyHi Citations

13. Tomorrow
Produced by T-Minus
This song is just good enough. The guitar on the production is a nice added bonus. I would not say it is a hit but I could see it possibly getting radio play. It could be a standout for the tape. I think they forgot a feature on this one. There is obviously someone singing and it sounds like Lloyd to me.

15. Feet Up
Produced by Boogz & Tapez
There is an Anita Baker sample in this one if you did not catch it. It is made gimmicky and sounds like a polyphonic ringtone. He gets back to singing again with a little more Auto-Tune on this one. Auto-Tune is never good. The song lasted a little long. Four minutes was a little excessive. He ruined a classic Anita Baker song. Let us keep it moving.

16. Can’t Stand Yall
Produced by Spinz
The production let CyHi down with this one. This song was just a total flop from start to finish. I cannot stand this song.

17. 100 Bottles
Featuring Chris Brown & Big Sean; Produced by DJ Chuckie
This sounded like a hit from the tracklisting. It is more like a foul into left. You can skip this one. I do not know why Chris Brown wants to sound like a young Michael Jackson still. He is too old for that.

18. Lives
Featuring Kris Stephens; Produced by Illusive Orchestra
This one is an adequate song. I could listen to it again with the “Summertime Madness” sample and the added keys to the background. Kris Stephens adds to the song too.

19. Entourage
Featuring Hit Boy; Produced by Illusive Orchestra
A little Marvin Gaye sample is always good. You would think this was a Motown concept mixtape. But it is supposed to be Ivy League music. You can throw that concept out the window.

20. Changed
Produced by Anthem
Here is a little Gospel to close out the mixtape. It was not a bad song but I was just waiting for it to end

21. Outro
The end is here with a little East Side high. That was a classy way to end it off.

Bottom Line:
There is no way I can give it more than that with the CyHi wisdom. I just cannot support all of the CyHi citations I gave. They were comical but they were not taken seriously. There is a few ones that I can repeat but more than half will be in the trash. I rather watch The Prince of Egypt than listen to this straight through again.