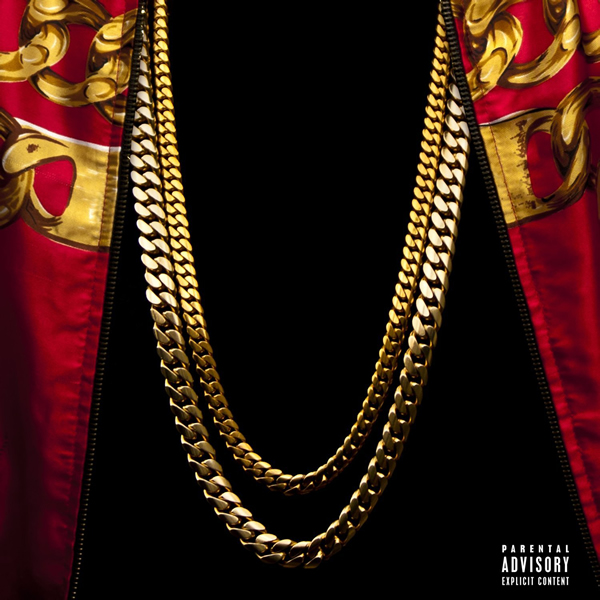 It’s been a long campaign for 2 Chainz. But be it talent or “griming” (A word made up 2 Chainz meaning timing + grinding), it seems like it’s time for the artist formally known as Tity Boi to take center stage. So after a name change, a few mixtape anthems, a Kanye West/G.O.O.D. Music co-sign, & some notable features, let’s finally give 2 Chainz’ solo debut, Based On A T.R.U Story, a listen.

1. Yuck!
Featuring Lil’ Wayne; Produced by StreetRunner & Matthew Burnett
It seems fitting for 2 Chainz to start out his solo album with Wayne on the hook (See: “Duffle Bag Boy”). While Weezy is on hook duty, 2 Chainz steps forward and gives us witty lines that got him to this point (Am I the only one that caught the “broken promises”/”Pocahontases” line?):

For those who are familiar with Chainz, this is a good example of what you’ll get on the album. And that makes it a good intro.

2. Crack
Produced by Southside
Immediately I was turned off by the flow 2 Chaniz chose on this song (cr’nack = crack, p’nuss = pussy, fi’nuck = fuck, and so forth). It’s actually kinda annoying. Besides that, the beat may sound like a multitude of trap mixtape songs but it’s still hard hitting and to be honest, most his listeners won’t mind the rest.

3. Dope Peddler
Produced by Bangladesh
The first thing that jumps out is the sample of Tom Lehrer’s “The Old Dope Peddler” (Who reportedly just wanted two autographed CD’s for use of the sample). While the sample is unique and fitting, it seems it’s really not utilized and feels awkward when it comes on during the chorus. Bangladesh & 2 Chainz gets points for trying to be creative though.

4. No Lie
Featuring Drake; Produced by Mike Will & Marz
The first single off the album as it probably should. I’ll admit I wasn’t sold on a track that featured bout 2 Chainz & Drizzy because I didn’t think they styled meshed well. I guess I was wrong because they created a banger as well as one of the songs of the year. While 2 Chainz has some memorable lines (“2Pac without a nose ring”), Drake’s verse (and hook) might have stole the show. Mike Will Made It now seems to be the new go-to “trap” producer.

5. Birthday Song
Featuring Kanye West; Produced by Sonny Digital, Kanye West, B Wheezy, Anthony Kilhoffer, Lifted, & Mike Dean
This songs should have made a bigger splash than it did. It felt like what Kanye did with DJ Toomp with “Can’t Tell Me Nothing”. Yea, “Birthday Song” isn’t as profound but you can definitely feel Kanye’s touch on Sonny Digital’s production. It must also be pointed out that Chainz & Yeezy work well together. 2 Chainz put the album’s two biggest features right next to each other and he was outshined again by it’s guest:

Last birthday, she got you a new sweater
Put it on, give her a kiss, and tell her, “Do better”
She said, “How ’bout I get you jewelry from the West End?”
How ’bout she hit the Westin and get her best friend?

6. I’m Different
Produced by DJ Mustard
If you expect Tyga to come on and start rapping “Rack City”, that’s because both of the song were produced by DJ Mustard. Besides that, it’s damn hard to deny that hook (“I’m different, yeah I’m different”). It’s simple but you’ll be singing it after the song goes off. And that’s kinda the main attraction here because 2 Chainz stumbles through some parts until the chorus. No really different but enjoyable.

7. Extremely Blessed
Featuring & Produced by The-Dream
No, this isn’t a song about being thankful for what you have in life. Nope, this about a girl with a bad body (What did you expect on a 2 Chainz album). I was gonna make a point about Chainz’s verse being short and this song being better served as The-Dream’s song. It is but on further listens, it could work both ways and wouldn’t surprise me if this is a future single. I also won’t be surprised when this is the soundtrack to twerk videos all over the internet. 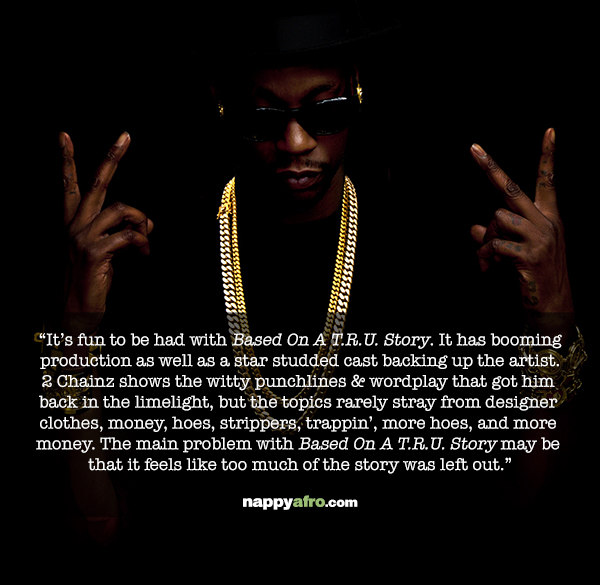 8. I Luv Dem Strippers
Featuring Nicki Minaj; Produced by YoungStarr
2 Chainz is pretty straightforward on most of these songs. From “All I want for my birthday is a big booty hoe” to now “I luv dem strippers”. And hey, I love strippers as much as the next guy but the problem with this song is that it’s exactly what you expect for a Nicki Minaj feature. I get that it’s basically a follow up to “Beez In The Trap” but it literally feels like they took a couple minutes on what this song was gonna be about (“We love strippers so lets call the song ‘I Luv Dem Strippers’. Shit, that could be the hook too.”). On a brighter side, the music video for this song has Nicki rubbing another woman’s ass.

9. Stop Me Now
Featuring Dolla Boy; Produced by Kenoe & Got Koke
We get a Playa Circle reunion here and it feels like something that would be on Supply & Demand or Flight 360: The Takeoff. Props to the producers because parts of the song sounds sampled but it isn’t (It may be an interpolation of Gene Chandler’s “Nothing Can Stop Me” but it’s redone by a singer named Anesha). The slowed pace of the track as well as some little introspection (“When they saw me they used to think of dope but now when they see me they just think of hope”) is a good change of pace for this album. I’m not anticipating another Playa Circle album but this track works.

10. Money Machine
Produced by Drumma Boy
At this point, I don’t have to explain the meaning of a song called “Money Machine”. But with Drumma Boy providing his signature and standard production, it’s on this song we get some #What2ChainzWouldSay moments:

I’m a fucking example of a fucking example
Hit her from the back, nigga, that’s a fucking example
I came up on Luke Campbell, I’m so sick I need Campbells
If you know I’m showing up, I hope you come with your camera
Got the city on swole with my Louis bandana
My car is shitting on niggas, I should ride with a Pamper

11. In Town
Featuring Mike Posner; Produced by Mike Posner & Lil’ Ronnie
I remember hearing an interview where 2 Chainz talks about his chemistry with Mike Posner and how they recorded around 5 or 6 records. It’s cool that these are artist having a connection in the studio but hearing that they had “a jamming ass record” set the bar too high. What they actually have is a regular “hey girl let’s just fuck on the late night tip” record. There’s nothing wrong with that but it’s nothing special. Oh, and apparently no Auto-Tune was used on this record (I know this because Mike Posner says it at the end of the song). Okay.

12. Ghetto Dreams
Featuring Scarface & John Legend; Produced by Carlos “6 July” Broady
I know I said earlier that “Stop Me Now” provided some introspection but in actuality, “Ghetto Dream”s is the “introspection song” of the album so it’s fitting to have a Scarface verse. The song deals with bad memories from the ghetto even after getting out and gives a few nods to Geto Boys’ “Mind Playing Trick On Me“. Carlos Broady does his thing on the production side which is cool because I didn’t know he still produced.

13. Wut We Doin?
Featuring Cap1; Produced by Mike Will & Marz
The last song seemed like it was more fitting to end the album but I guess 2 Chainz is leaving the way he came in; rapping about sexing your girl and getting money. This is understandable because it’s these kind of lyrics over these kind of beats that got his where he at. I would have chosen something a little better, maybe even threw one of the better bonus tracks in it’s place (The Don Cannon produced “I Feel Good” would have worked). Still, this closes the album.

Bottom Line:
2 Chainz deserves applause for doing the unthinkable and taking his career out of the graveyard and turning himself into one of the hottest rappers today. But maybe I was looking for more from 2 Chainz’s solo debut. Maybe his scene stealing cameos on songs like “Mercy” or “Beez in the Trap” made me think that he had more in store.

It’s fun to be had with Based On A T.R.U. Story. It has booming production as well as a star studded cast backing up the artist. 2 Chainz shows the witty punchlines & wordplay that got him back in the limelight, but the topics rarely stray from designer clothes, money, hoes, strippers, trappin’, more hoes, and more money. What’s weirder is that an album titled Based On A T.R.U. Story doesn’t really convey a story of 2 Chainz at all. I’ve heard him say before that he’ll give more of his story on future albums, but with 13 tracks, you’d think he could fit more in right? The main problem with Based On A T.R.U. Story may be that it feels like too much of the story was left out.