Kendrick Lamar Killing Rappers On Their Own Tracks: An Anthology 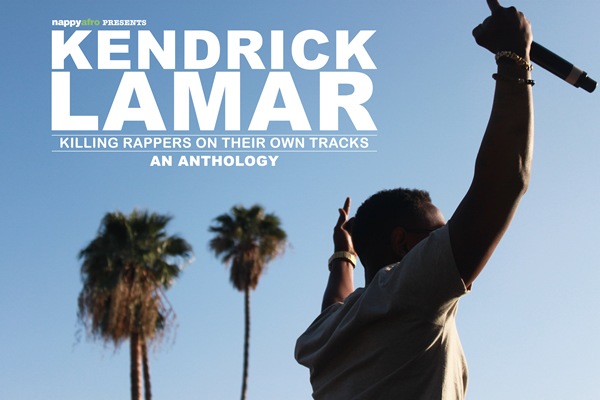 Later this year on October 22nd, Compton rapper Kendrick Lamar is set to release  good kid, m.A.A.d city, which is shaping up to be an absolutely transcendent Hip-Hop record (think: Madvillainy or MBDTF). So in anticipation, here is a collection of Kendrick’s most thoroughly scene-stealing performances.

Kendrick’s hook alone probably outshines Game on this song. Game’s verses aren’t terrible by any means (although he’s probably a little delusional when he talks about being one of the top 5 rappers of all time) but for the last minute or so of the track, the beat fades out and Kendrick rattles off a spine-chilling set of bars.

Meek Mill – “A1 Everything”

The wonderful thing about this track and a lot of other songs Kendrick appears on, is that Kendrick is able to adapt to what his host is doing and just do it better. This song is just Meek Mill bragging pretty effectively about how awesome he is over a hyped-up beat. If Lamar came through with a verse about visions of Tupac and Ronald Regan-era politics, it would kill the vibe. So instead he busts through the door screaming gun-noises and snarling about million-dollar contracts.

Yeah. This isn’t even fair. They even let Kendrick rap first. At least Game had enough sense to make people wait through his verses first.

In today’s lesson, Kendrick shows you how to differentiate “new west” hype from “new west” talent.

Consequence – “Up Against the Wall”

When Lil Wayne was in his guest-verse mercenary hey-day, it felt like every verse he recorded  was pretty interchangeable, even when he was on point. He would let loose a handful of similes about either guns, women, weed, or syrup (or all of the above) and then yell about Young Money. Here, Kendrick does the exact opposite. He does his research, recognizes that Con’s tape is entitled Movies on Demand 2 and goes all imdb-crazy on us.

DZA was probably too hazed out to realize how severely out-leagued he was here. The start of Kendrick’s verse was pretty chill and at some point it sounds like he realized that apathetic weed-rap isn’t really his style. I’d like to imagine that when he went in to record this, Lamar probably felt like Don Draper in this scene.

If Kendrick is rapping over a Bangladesh beat, you should probably stay out of his way.