Between The Ropes: The Rebirth Vol.1 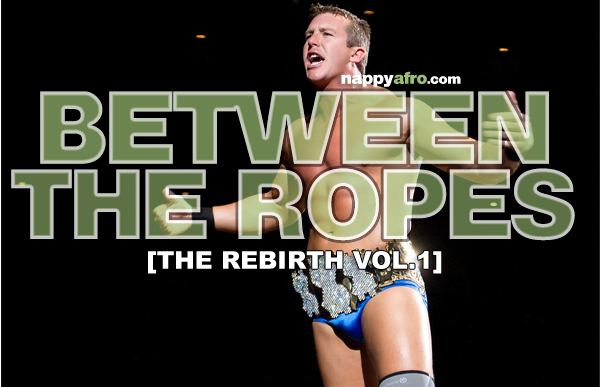 Wrestling is more cyclical than music. You’re likely to see some guys have the same gimmick, from a previous era, at the same time and they both just got into the game. Even with that being the case, sometimes, some folks slip through the cracks and end up dead to the fans and have to go back to development to try and find something else that works. So here are 5 stars that I think need an image overhaul to help them make the big splash…and honestly, this is just the tip of the iceberg and the first in what I hope will be many volumes.

Ted DiBiase
His name was his reason for being in Legacy, but he didn’t own what it meant then. When he was in singles and had the million dollar belt and a valet, he was on top for a while, but it faded. This is really the best shot he had at making something strong. The whole DiBiase Posse bullshit is terrible.

New Gimmick: Right now, with the election on deck the disparity between rich and poor is not only a hot topic, its the main topic. Show Ted Sr. talking to Ted Jr. and really giving him the blues about where he is in his career, about how he’s not taking advantage of his hard work, good name and money. LOTS AND LOTS OF MONEY. So Ted Sr. tells him that he’s cleaned out his accounts. He’s no longer allowed to use the DiBiase name or finisher variation; he has to earn it all back including tights and music. He’ll be the biggest known generic guy in the company. Also lace him with a bodyguard and a female manager to help get his career back on track. THIS is where it really picks up. The female, is Vicki Guerrero. She’ll openly tell him that she took this job out of respect for his dad and because of the cash. She’ll openly let him know that he’s the side project and that Dolph is her main concern. The bodyguards job is to make Ted win or lose by his interaction based on the verdict he gets in his headset or by Vicki giving a thumbs up or down. Maybe even take it as far as to have a mystery man give that gesture from the luxury box each week prompting the bodyguards action. Either way, what we’ve created is a great haven for Ted where he doesn’t have to talk (number 1) and he’s also a perfect tween. You can take him to face or heel based on how the crowd reacts. Ideally, he’s a face because he’s literally fighting for his way of life and surrounded by obstacles. You could run this for months culminating in the eventual revolt or success at the end.

Alicia Fox
With the tag division being ripe with young black talent, Alicia hasn’t seen the same respect. The only other black women we see are the “Funkadactals” which feature Naomi who is more talented than a good majority of the female roster (we’ll talk about that in another edition). So Alicia has been used to get beat up, move matches or not at all. She’s a personal favorite so I made sure to include her in this write-up.

New Gimmick: If there is any division that needs more theatrics, it’s the divas division. With Kharma, the Bellas, McCool, Maryse, and AJ all gone the entire personality of the division is dead. Layla just doesn’t move the meter like she did with McCool. Beth Phoenix would be better off wrestling the guys because it’s simply not believable that she loses to any of these chicks regularly. Natty was draped with the farting gimmick, her career will never be the same. Tamina got a shot, but nobody really seems to roll with her for whatever reason. Eve is taking a break from ring work (thank God) and Kelly Kelly is just a pretty face. So that leaves everything stagnant, to the point that Kaitlynn is the number one contender. I don’t know that this has ever been done, but I’d have Fox get help from Otunga as her representative and talker. I loved what they had going with AW and him scouting out help, so have Dave introduce himself to her the same way. Say that he thinks she’s being mistreated and abused by the company and offer representation. Have him introduce her to a new “gym/trainer” that see’s her take a more hardcore fighting angle, with a submission finisher. In the ring, she’s more beat ’em down than frilly flips and cheerleader moves. Otunga will make her an instant heel and her fighting style will make her brutal. The combination will make fans enjoy it regardless of if they cheer or boo her. Much like the way folks stop to watch Rybak matches, they can watch Fox squash the division in awe of her brutal nature. Have this culminate with her having the belt, breaking Layla down and eventually facing Beth for the title in a brutal match rich in personal history.

JTG
Let’s be honest, JTG is solid in ring but annoying outside the ring. He often sounds like he’s confused and unsure on the mic and the whole “black thug cool” gimmick is old as hell. We got Prime Time Players doing his old tag angle (sans the theft) Otunga and Kofi proving that black stars can be something other than dancing, rapping thugs. So where does JTG fit in?

New Gimmick:  JTG needs to pick up the “dashing” type gimmick from Cody. I’ve always thought that the model/pretty boy gimmick would have a place in wrestling. JTG can’t help but have his bruh walk on full display and never seems like he’s in the cool with whatever is going on. Take that up a notch by making him the trendsetter and definition of pretty boy. Show him getting a tight fade in the shop, speaking on how to be cool and fly. Where dashing was giving skin and grooming tips, have JTG giving shopping and fashion tips, mostly. This also allows WWE a chance at advertising with clothing companies directly for those vignettes (and we know WWE is about that dollar). I still agree that this gimmick will only go as far as JTG’s talent pushes it, but he sorely needs a new look, even if it’s only for a few months.

Curt Hawkins
This guy has done everything WWE has asked him to do and usually ends up with the short end of the stick. Now that Tyler Reks quit, Curt is back in the abyss. Booker told them that they needed to get their act together so now this is where Curt can pick up.

New Gimmick: Book eludes to Curt being done in WWE and being a smart guy, have him suggest that he go back to the drawing board and/or pick another career. Show Hawkins backstage reading Shakespeare or something similar, a brainy read of some sort. Then have an obvious heel come along and make fun of him for it. Following week, show Hawk at the library and the same thing happens. Obvious heel is walking by library, sees Curt in there reading, comes in to make fun of and bully him yet again. This goes on for a month or more. Hawkins doing things that are “smart” such as reading, studying and getting bullied by heels, even have it play into him getting an eye injury that requires that he wear glasses. Now he’s full out nerd mode and getting bullied. Even have him wrestle with sport goggles (also great for marketing something else to pass out to fans). Having him be the fighting nerd is great for both WWE and  him. WWE is really on this Be A Star campaign but have more folks bullying others than possibly ever before. This way, he can be the other side of the game, make up a story about how he was an honor roll student and went into all his other gimmicks trying to run away from who he was. When Booker told him to go away and do him, he came back to that. It could be a much cooler version of the Genius gimmick. Hell, even have him cut promos on some brainy shit with book suggestions, little Mr. Wizard style science projects that are safe and fun, even weekly tips for dealing with bullying. The possibilities are endless in this role and the story does WWE a great world of good.

What do you think of the ideas and people I picked for this edition? Who do you think I should pick for the next one?