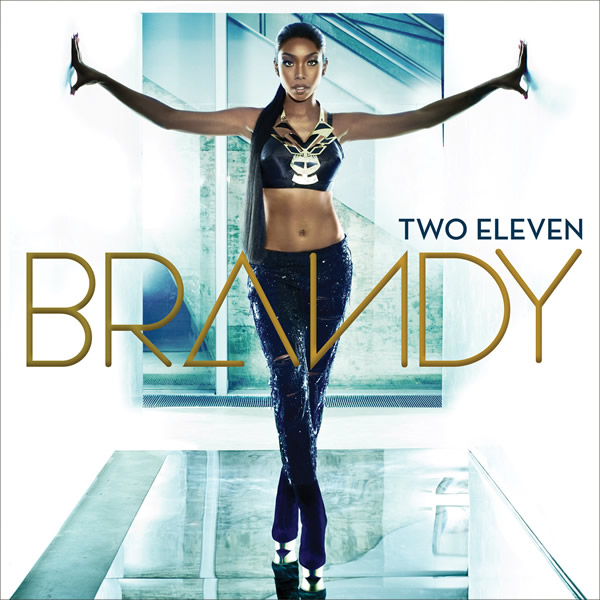 In today’s microwave society longevity has become an almost obsolete concept. With the current here today, gone tomorrow attitude in hip hop and R&B, it’s impressive for anyone to survive past their first single. So for Brandy to still be relevant in 2012, after debuting 18 years ago in 1994 with her self-titled album, is a testament to her consistency as a top performer. Indeed her resume speaks volumes, having sold 30 million records worldwide (9 million domestically) and won over 100 awards throughout her career.

What does that mean to today’s youth who think CD’s are as ancient as 8-tracks? Probably not much. In actuality, Ray-J may for once have more name recognition with his dabbles in reality TV (and that tape) than his big sister. Brandy’s looking to take her spot back on the pop charts with Two Eleven, her first album in four years? Does Brandy win back her seat on the top or is she still Ray’s older sister? Sit back and find out.

1. Intro
We get an ominous and foreboding track with a drum loop and a bit of chanting to start out the album. Nothing spectacular, nothing terrible, just something to get you plugged into the album.

2. Wildest Dreams
Produced by The Bizness and Sean Garrett
To bite Michael Cole’s style, “this sounds like vintage Brandy.” Mid-tempo track? Check. Falling in love after doubting if it’s even possible? Check. The Bizness laces Ms. Norwood with a nice, subdued track that lets Brandy’s raspy vocals shine for the second single off the album. Good track.

3. So Sick
Produced by Bangladesh and Sean Garrett
Bangladesh steps up next on production to give Brandy a subdued and warped sounding track for her to lament about a lover who just won’t do right yet still has endeared himself into her heart. The first two tracks sound like 90’s Brandy, which for her older fans provides great nostalgia. Lyrically, she superbly crafts the experience of someone who can’t let go, even when they need to:

This is the song your boy plays alone by himself after he tells you women ain’t s**t and about how many girls he’s screwing. Brandy really makes the song feel inclusive and relatable, one of her best qualities.

4. Slower
Produced by Switch
When I heard this song I instantly thought Timbaland was the producer. I was wrong, but Switch is a believable impersonator. Here Brandy reminds us that she’s a grown woman and doesn’t like to be rushed when it comes to the bedroom. She implores her man to take it slow and focus on all of her instead of going straight for the wam-bam, something I’m sure will have the ladies clapping and snapping their approval. Unfortunately, a weak hook turns a could be anthem into an only decent track. Definitely a missed opportunity here as this could’ve been a solid radio hit.

5. No Such Thing As Too Late
Produced by Jim Jonsin, Mr. Morris & Rico Love
Here we continue the theme of waiting, this time completely as Brandy coo’s to her partner and ask him to wait for intimacy and promises that it will be worthy. Critics have said that Brandy has taken an edgier approach with this album, but I don’t hear it. Let’s be clear, Brandy will never be Lil’ Kim, she’s consistently played the good girl throughout her career. With the often hyper-sexualized nature of R&B today, it’s somewhat refreshing to hear Brandy talk about abstaining and building true love over quick pleasure. The production team also does a good job of creating a lush ballad for the singer. Just know it took every ounce of chivalry I had in me to like this song.

6. Let Me Go
Produced by Bangladesh and Sean Garrett
Bangladesh returns on the boards to give the album a shot in the arms in terms of energy. The keys and booming clap provide an electrifying bounce and help pick up the mood of the album which was stuck in the mid-tempo. One of Brandy’s less desirable traits is a penchant for corny lyrics (a reason she doesn’t often write her own songs), and I don’t know how you get cornier than saying your mom is going to get on Twitter and tell you to tone it down. This song works better if you zone out to the beat and sing along to the hook. 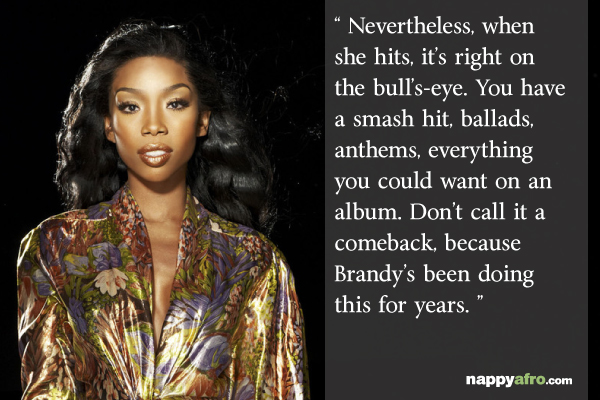 7. Without You
Produced by Harmony Samuels
We get back on track as Brandy goes back to where she’s most at home, pleading for love and affection. Brandy always sounds best when she has to flex her vocal muscle. She may not be Mariah or Whitney, but you can’t deny the power in her voice. Harmony Samuels is true to his name and brings the right mix of harmonies, completing a nice return to form on this one.

8. Put It Down
Featuring Chris Brown; Produced by Bangladesh, Sean Garrett & Dem Jointz
By now you’ve had to here this song, it’s the lead single off the album. The team of Bangladesh, Sean Garrett and Dem Jointz create an infectious, bouncy track and Brandy doesn’t let the opportunity for a hit pass her by. Brandy is always good for a single and this time is no different as she and Chris Brown, the only feature on the album, made a fun song that you couldn’t escape this summer. This song was a great primer to get fans excited for the album.

9. Hardly Breathing
Produced by Rico Love & Medor
The mood switches back to mellow as we get Adult Contemporary version Brandy. The sound again goes back to that 90’s R&B vibe as the subdued rhythm and simple drum pattern match up well with Brandy’s timbre. The theme of this song is kind of like “Without You”, except this time the boyfriend is in the wrong and Brandy can’t deny that she still wants him. A tried and true concept, but it still works.

10. Do You Know What You Have
Produced by Mike Will Made It & P-Nasty
It’s still hard for me to see Mike Will Made It and not think of Bands. However, he crafts a very minimal beat that Brandy sounds good on. At this point it is clearly obvious that this album is all about love. Being in love, wanting to be in love, not being loved the right way, etc. Here the songstress asks her man if he truly understands the good thing he has. This is what you get with a Brandy album, for better or worse, and as long as you’re okay with that then you’ll enjoy this song.

11. Scared of Beautiful
Produced by Warryn Campbell, Prescott
If you look at the production notes you’ll find out that Frank Ocean wrote this song, and it definitely shows. Ocean pens easily the best lyrics of the album as he writes about the struggles of commitment and how hard it is look past the physical and delve deeper into the insides of a person, which may not be as beautiful as the outside. Brandy effortlessly makes this song her own as she sings the essence of the song:

This was easily my favorite song on the album, primarily for the song writing but secondly it was a fresh and different perspective on the love concept. This is also the third single for the album. It may be too deep for the radio, but it’ll be perfect for your iPod.

12. Wish Your Love Away
Produced by Mario Winans & Brandon Ramon Johnson
The problem with this song is that it comes right after such a dynamic and original track. Technically, Brandy sounds great and the production doesn’t let her down either, but after such a raw and honest track as we had this song fails to carry the momentum. If it had been placed before “Scared Of Beautiful”, it’d be a good song. Yet here it just sounds like filler.

13. Paint This House
Produced by Rico Love, Earl E., & Pierre Medor
As I mentioned previously, Brandy can get pretty corny, and when I realized that this song would be a metaphor I internally groaned a bit as I wasn’t sure she’d be able to pull it off. Fortunately I was wrong as this is actually one of the strongest and most complete songs on the album. Brandy uses the concept of a house being decorated with the love shared between her and her lover, each memory adding to the decoration of the house. This is the growth and maturity that folks have been wanting to see from Brandy and it shows in the lyrics:

Cancel the decorator
We don’t need no help
You’ll pick out the colors
We’ll clean up the mess later
We do it so well
Loving one another
In the closet
On the Facets
In the balconies
Anywhere you are inside this house
You’ll, think of me yeah yeah yeah

I can only imagine how much better this song would have sounded if it had followed “Scared of Beautiful.”

14. Outro
The album closes with the same instrumental used for the intro. I don’t know why they just didn’t let “Paint This House” finish the album out, it would’ve been a much better ending.

Bottom Line:
I’m not going to lie, this album was a rough one to review. After my initial listening I was sure I hated this CD. Thankfully I didn’t go with my gut reaction and gave it a second spin. This is certainly an album that has to grow on you and it does get better with repetition. This album is a mood album, meaning you have to be in a certain state of mind to really enjoy this record. Brandy is best when talking about love and there’s almost no one better at portraying the heartbroken lover or content lovebird as Brandy. Her churchy bravado and rasp are perfect for those kinds of records. However, for someone who is 32 and has been singing since she was 14, at times the growth and maturity just don’t seem to be there as much as you’d expect it to be. A lot of the songs here sound the same and have identical concepts. As an adult with so much experience, you would think that Brandy would have a broader perspective instead of being so cliché.

Nevertheless, when she hits, it’s right on the bull’s-eye. You have a smash hit, ballads, anthems, everything you could want on an album. Don’t call it a comeback, because Brandy’s been doing this for years.