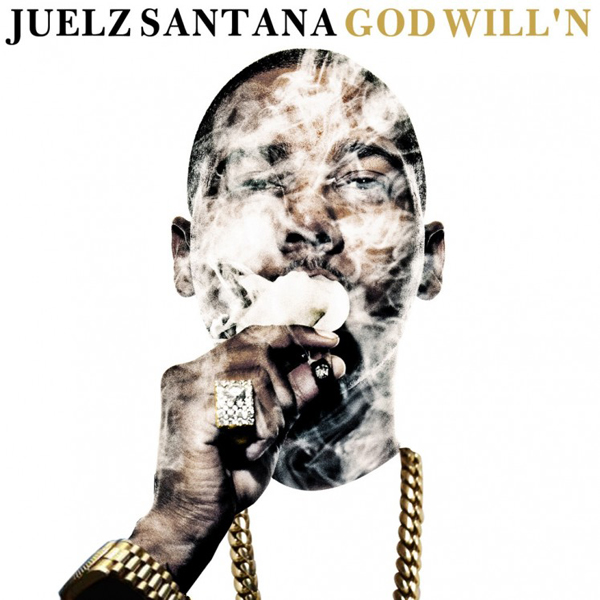 Juelz Santana has made an impressive reentrance into the game with his mixtape God Will’n. It’s been a while since we’ve heard from ‘Elz but a tape like this makes it worth the wait.

While many artists fail to pervade a complete idea throughout an entire record, Juelz has mastered the art of consistency despite his wide array of producers. He maintains a thuggish mentality throughout the tape but definitely mixes it up enough to avoid monotony.

The features aren’t anything to brag about and the tape would probably be better without them. Despite this, ‘Elz brings things together well.

The record is definitely end loaded but is worth listening all the way through. It’s heavy on the bass so your neighbors won’t be too happy if you enjoy this.

1. Sho Nuff
Produced by Buda Da Future
The first track is based on the character Sho’nuff from The Last Dragon and samples his famous lines in the intro and in the hook. Like most of the rest of the tape, this song has a heavy beat accompanied by intimidating notes. He boasts of riches, women, and violence.

2. Nobodys Safe
Produced by Jahlil Beats
Jahlil Beats increases the pace with the second track. With another intimidating song, Santana claims gang affiliation and an unflinching devotion to cruelty.

3. Bad Guy
Featuring Jadakiss; Produced by Dr. Freak
“Bad Guy” is inspired by Tony Montana’s infamous speech to an aristocratic audience in a fancy restaurant he gets drunk in. Part of his speech is sampled for the introduction. It’s a good track with more threats of violence.

5. Black Out
Featuring Lil’ Wayne; Produced by Shy Money XL & Ty Real
Unfortunately this is another mediocre track and Wayne’s verse and hook have a lot to do with its lack in quality. Skip.

6. My Will
Produced by Gnyus
As the most sentimental track on the mixtape, “My Will” truly represents the yin to the record’s aggressive yang. The song is essentially Juelz’ will in case he dies tonight. He really speaks from the heart on this one.

7. Clickin’
Featuring Yo Gotti; Produced by Non Stop
‘Elz knocks it out of the park with “Clickin'”. This is the best on the tape and definitely the hardest banger. The beat actually resembles that from “I Luve Dem Strippers” by 2 Chainz but Juelz kills it lyrically.

8. Everything Is Good
Featuring Wiz Khalifa; Produced by Kino Beats
Wiz joins the tape with a great chilled out track about burnin’ (What else would Wiz rap about?). It’s a good one and probably has the best feature yet.

9. Wanna Be Me
Produced by Prime
Here is a great upbeat track; in music and in lyrics.

They don’t wanna see me, they just wanna be me.
Yeah, I’m getting money, but your bitch gave me a freebie

10. Turn It Up
Featuring Lloyd Banks; Produced by Automatik Beatz
Automatik presents a strange and kind of ominous feeling beat. Nothing special here.

11. Nobody Knows
Featuring Future; Produced by Freak
This day and age you can’t expect artists not to feature Future sooner or later. It’s not a horrible song but Future’s hook is really whiney. He complains of having people that depend on him (like most people) and that no one knows what he’s going through (Despite the fact that most people do).

12. Blog That
Produced by Shy Money XL & Ty Real
This is Juelz’s song to all the haters on the internet. Not bad at all.

13. Nothing To Me
Featuring Jeremih; Produced by Futuristiks
This one’s another banger and a great song overall. Jeremih takes the catchy hook while Juelz drops some memorable lines.

I don’t care if that ass fake as long as that ass shake.

14. Both Sides
Featuring Lil’ Durk & Jim Jones; Produced by Ronnie]
Lil’ Durk and Jim Jones join ‘Elz for this territorial bnger. This is one of the hardest tracks on the mixtape and is definitely one of my favorites.

15. What I Want
Produced by Shy Money XL
Juelz shows his thuggish paranoia on “What I Want” as he claims to think the feds and women are bugging his phone. It’s a pretty laid back song.

16. Awesome
Featuring Wale; Produced by Jokey
While it’s not one of the strongest on the tape, “Awesome” has its place.

Juelz has some entertaining lines on God Will’n.

17. Bodies
Featuring Lil’ Reese; Produced by Non Stop
The mixtape ends with a couple more bangers. Don’t miss this one.

18. Shoot’em Up
Featuring Bounce
This one has a great sample of Gyp Rosetti from Boardwalk Empire to start it off. Not bad.

Bottom Line:
While Santana has had success with mainstream hits, it seems he embraced the freedom of a mixtape and made something raw. It has a very gritty and authentic feel despite its quality production. This is the type of record that can earn you some fans in addition to convincing everyone you’re back.

Tracks that stand out are “Clickin'”, “Nothin To Me”, “Both Sides”, “What I Want”, and “Bodies”. This is the first time I’ve ever thought that an artist could have done better simply by releasing a few less songs. Subtract a few of these weak tracks and this is a solid 4. Nevertheless, it’s a great mixtape worth multiple listens.