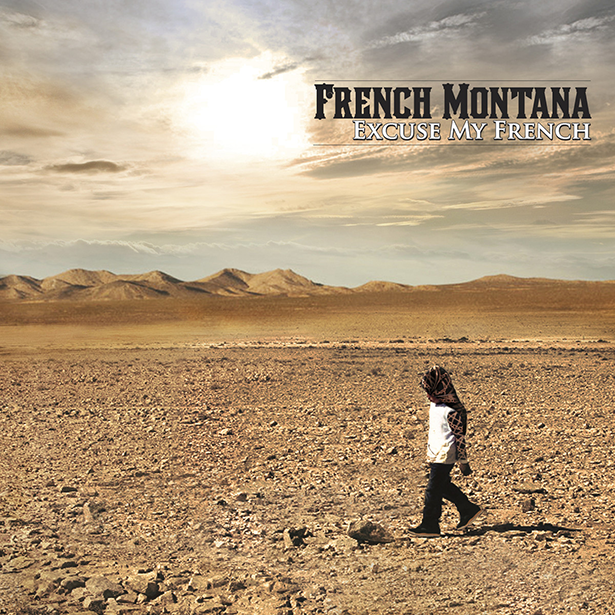 When is the last time Bad Boy has released an album? Well, it was MGK’s debut album. It was news to me. Well, French Montana is a little different than that. He is here with his debut album Excuse My French. If this was released months ago, would it have been a huger success? Probably. But we are not here to speak on Diddy’s marketing strategy. We are here to see what French Montana has to offer with his first full length studio album.

1. Once In A While
Featuring Max B; Produced by Reefa & Rick Steel
The album starts off with a slightly muffled recording of Max B. He is just giving his full support of the album. Why is this song called “Once in a While?” I am not sure. But it was a typical music that you expect from French Montana. That is if you are fan or have been watching from a distance. The song focuses on a tad bit of girl talk with a heavy dosage of gun influence. He uses the Auto-Tune on this one and it gets annoying after getting deeper into the track. It is not the bearable autotune that we sometimes get from Future.

2. Trap House
Featuring Birdman & Rick Ross; Produced by Jahlil Beats
I never wanted to hear Birdman on this album. You didn’t either. But French Montana asked for his assistance along with Rick Ross. They both should have been cut from the track. Both label bosses rhymed expletives often in their verses instead of using their brain power to think of something more creative. It is quite sad because French’s opening verse is pretty good…for him.

3. Ain’t Worried About Nothin’
Produced by Rico Love & Earl & E
The album makes a turn for the greater good with this track. French gives you that good trap music you was looking for. The chorus is so enticing you will be singing it in your cubicle during your 9 to 5. You have to speak it softly to avoid getting fired. But there are no worries around here.

4. Paranoid
Featuring Young Cash; Produced by Young Chop
Ironically, the album follows “Ain’t Worried Bout Nothin'” with “Paranoid.” The track isn’t much about paranoia at all. Do not let the title fool you. It is more so about that “chopper” and “rounds.” Nothing much has changed subject matter wise from this song and “Ain’t Worried Bout Nothin'”. “Paranoid” is just not as effective.

5. When I Want
Produced by Danny Boy Styles
I don’t remember listening to this track on the first listen and I wish I didn’t have to sit through it a second time. It had a brief stroke of genius at about the two minute mark but then it went back to the same noise quickly.

6. Fuck What Happens Tonight
Featuring DJ Khaled, Mavado, Ace Hood, Snoop Dogg, & Scarface; Produced by The Beat Bully
French Montana went to all parts of the world with this one. No one was left out. You all want to know who had the best verse right? It was easily Scarface. But you had to wait about four minutes to get to it. It isn’t worth all that. You can skip most of this track.

7. Gifted
Featuring The Weeknd; Produced by Danny Boy Styles
French Montana played his cards right with starting off with The Weeknd. He had a hiccup with writing his last verse though. It lacked creativity and got redundant quickly. I know we don’t go to French Montana for deep lyrics but there are ways to hide them. Ask Curren$y. He does it perfectly. 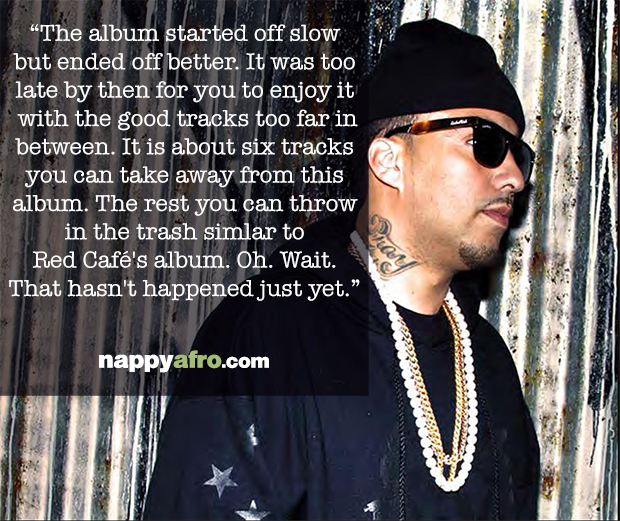 8. Ballin’ Out
Featuring Jeremih & Diddy; Produced by Cardiak
This one can be a hit after an array of misses on this album. Jeremih is used correctly and French Montana and Diddy provide solid verses. The talking at the end was a little unneccessary. French Montana has been around Diddy too long. It is still an alright track.

9. I Told ‘Em
Produced by J Oliver
Another enticing chorus on this one similar to “Ain’t Bout Notihin.'” The eerie production on the track works. It is not much to the track really but that is French Montana’s formula. It works this time.

10. Pop That
Produced by Lee On The Beats
You know this track by heart now even if you don’t want to. Uncle Luke deserves about 75% of the profits of this track. He deserves more than a shot out. It is a hit because of the sample. This album might have made noise if this track wasn’t released almost a year ago.

11. Freaks
Featuring Nicki Minaj; Produced by Rico Love & Earl & E
This is another sample heavy track that should be successul. It is fun and could be a club banger if put in the right hands. Having an alleged freak Featuring on the track helps also. He should have somehow got Rihanna on the track too. This one will do though. It is probably one of my favorite tracks on the album.

12. We Go Where Ever We Want
Featuring Ne-Yo & Raekwon; Produced by Vinylz, Allen Ritter, & Reefa
Another sample heavy track? Don’t mind if I do. Getting a verse from Raekwon for the stamp of approval helps also. This is one of the tracks that should have been closer to the beginning.

13. Bust It Open
Produced by The Arsenals
This track is “Pop That” Jr. It is a strip club anthem in the making. I don’t know if it is there yet. I don’t attend those establishments. There is not much more to say about this one. It works for the demographic it is geared towards. You can put the pieces together yourself.

14. Drink Freely
Featuring & Produced by Rico Love
The album slows down for a second thanks to Rico Love and smooth production. French Montana shows he can cross over a little bit. Rico Love really dominates this track. You would think it was Featuring French instead of Rico Love. He steals the spotlight.

15. Throw It In The Bag
Featuring Chinx Drugz; Produced by Bos
This sample does not work as well as the others. It is solid but does not have the bang as the previous tracks were having. The pair between French and his Coke buddie Chinx Drugz do not knock this one out of the park. It is missing its wow factor.

16. Marble Floors
Featuring Rick Ross, Lil’ Wayne, & 2 Chainz; Produced by Mike Will Made It
Everyone came with a pretty good verse along with being comical at times. That is what you expect when Lil’ Wayne and 2 Chainz are on a track. But Rick Ross sets the tone for the track and it flows pretty well from there.

17. Ocho Cinco
Featuring MGK, Red Café, Diddy, & Los; Produced by Young Chop & Rob Holladay
This is the future of Bad Boy? I am sorry to hear that. This was not the way to end the album. I know you have to show your crew love but you have to come together better than this. This conceptual record does not work.

Bottom Line:
That is at its best. It started off slow but ended off better. It was too late by then for you to enjoy it by then. The good tracks too far in between. It is about six tracks you can take away from this album. The rest you can throw in the trash similar to Red Café’s album. Oh. Wait. That hasn’t happened just yet.