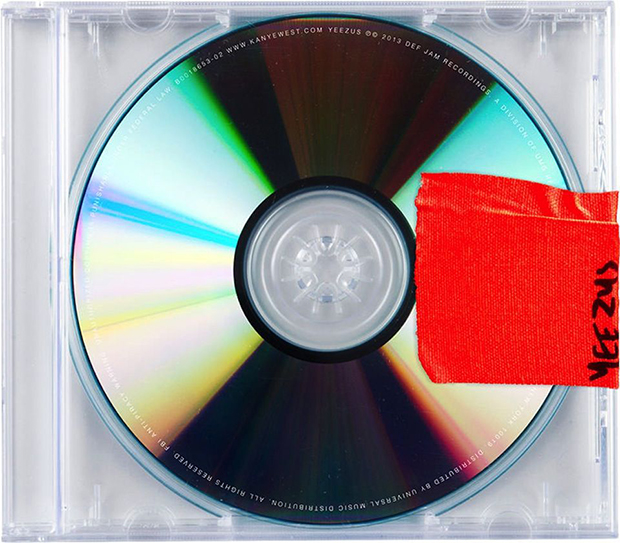 Kanye West returns for his sixth studio album, Yeezus, which opens new chapters in Kanye’s already storied career as a musician. After carrying Jay-Z on the collabo album Watch the Throne, West took some time to build the team up on Cruel Summer, now he is coming back in the form of Yeezus to save all the lost souls in Hip-Hop.

1. On Sight
Produced by Kanye West, Daft Punk, Mike Dean, & Benji B
Album starts out with that electronic music aka the Euro sound (which might come from recording the album in Europe). I really don’t like the beat that much, but it grows on you after a couple of listens. This is the song where he takes shots at his girl (who I will not mention):

Black dick all in your spouse again/and I know she like chocolate men/she got more Black niggas off than Cochran.

Kanye spazzing out on this one!

2. Black Skinhead
Produced by Kanye West, Daft Punk, Gesaffelstein, Brodinski, Mike Dean, Lupe Fiasco, Jack Donoghue, & Noah Goldstein
As soon as the track comes on, it reminds me of that Marilyn Manson song. Ye tried something different on this one and to be honest, IT WORKED! It has that tribal sound that will have everyone moving in unison like they did on that scene in The Matrix. Will we start seeing “black skinheads” popping up now?

3. I Am A God
Featuring Justin Vernon; Produced by Kanye West, Mike Dean, Daft Punk, & Hudson Mohawke
This is basically Ye telling niggas that he is one of the big dogs in the game. He has made it to the upper echelon and he’s in the stratosphere now. He don’t see you.

4. New Slaves
Featuring Frank Ocean; Produced by Kanye West, Ben Bronfman, Mike Dean, Travi$ Scott, Noah Goldstein, Sham Joseph, & Che Pope
This is the video that he projected on 66 buildings. This is his anti-corporation, anti-big business song. Very simple beat, but you get a contradictory message from Mr. West. How are you anti corporation when you ARE a corporation?

5. Hold My Liquor
Featuring Chief Keef & Justin Vernon; Produced by Mike Dean, Kanye West, Arca, & Noah Goldstein
Chief Keef makes an appearance on the album, don’t worry, he’s just on the hook. Ye is doing him on this track, by that I mean the braggadocio lyrics we are all used to him doing. 6. I’m In It
Featuring Justin Vernon & Assassin; Produced by Kanye West, Evian Christ, Dom $olo, Noah Goldstein, Arca, & Mike Dean
This is one of those songs where Ye pushes the envelope and it doesn’t work in his favor. It’s just too much going on with the song for it to be enjoyable.

7. Blood On The Leaves
Produced by Kanye West, Hudson Mohawke, Lunice, Carlos Broady, 88-Keys, Mike Dean, & Arca
This is one of my favorite tracks on the album. It sounds so 808’s & Heartbreak-ish. Maybe it’s the Auto-Tune, maybe because it samples one of my favorite No Limit songs, “Down For My Niggas”. I don’t know what it is, but I like this song!

8. Guilt Trip
Featuring KiD CuDi; Produced by Kanye West, Mike Dean, S1, Travi$ Scott, & Ackee Juice Rockers
This is another one that sounds like it could have been on 808’s. Because I like that album so much is why I can listen to this song. If you didn’t care for that album then you probably won’t like this song either.

9. Send it Up
Featuring King Louie; Produced by Kanye West, Daft Punk, Gesaffelstein, Brodinskim, Arca, & Mike Dean
Yeezus got back on that vibe that makes you nod your head to the beat. Ye out here spazzing on the track again, but that is to come expected.

10. Bound 2
Featuring Charlie Wilson; Produced by Kanye West, Che Pope, Eric Danchild, Noah Goldstein, No I.D., & Mike Dean
This song right here is at the top of the list when it comes to Kanye songs. He did the damn thing on this one. I really love the production on this one. When 2013 is over, this might be on my list as songs of the year.

Bottom Line:
Yeezus is further claim that Kanye West is a bonafide superstar. Ye pushed the boundaries on what we thought was Hip-Hop and moved them out even farther! Watching the evolution of Kanye from producer to producer/rapper to rapper to superstar has been fun. Ye took chances with this album, some worked and some of them didn’t. I really think that on the ones that didn’t work, the problem was too much going on in the song. All in all, I think this was a pretty decent album from Kanye, however, I don’t think I will play this in its entirety that much after 4 months or so. People will complain about this one, but you have to understand this, you don’t follow the rules when you are the #1 draw in the game.