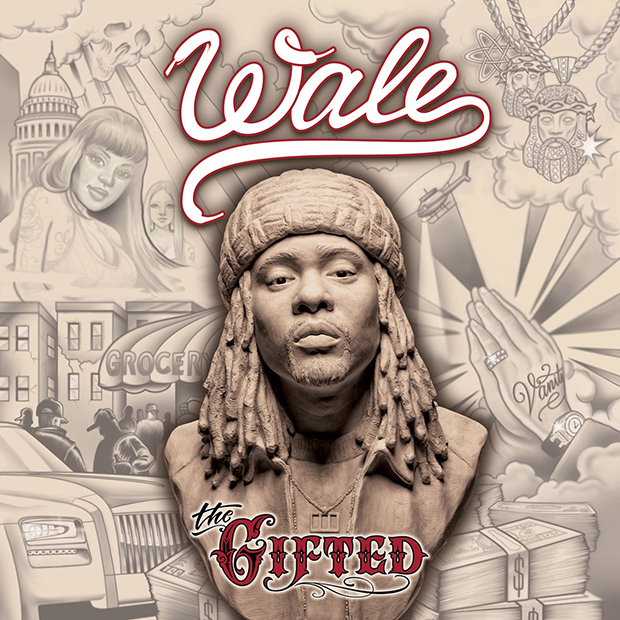 Wale is coming to us with his 3rd studio album. People are of all over the place with him. He’s good but boring, he’s wack, he’s the best out of Maybach Music Group, I’ve read/heard it all. If you look at reviews and sales of his first two projects, folks still treat him like an underground backpacker commercially. After a pretty impressive mixtape and a single that is making waves, I’m sure that everyone is trying to finally make a verdict for Wale on this album. Either you’re with him or against him and with an album titled The Gifted, it sounds like he’s content with letting you pick your stance.

1. The Curse of the Gifted
Produced by Sean C & LV
Like much of the music he’s put out, the popular opinion will probably be that this song is boring. It’s not headnod music but we gotta remember where Wale comes from. He’s a backpacker who relies on lyrics first and this song is more proof. He may not make you break your neck, but he should at least have you silently enchanted here. The tone of the album is set on this minimalistic yet soulful track to open the project.

Life’s better when your niggas good, and your mama straight
I’m honestly still looking for some type of balance
Cause the status got me jive tripping
Cause I like my bitch, but I love these bitches on my dick
When spitting tell me what you feeling different knowing you’s the bread winner
And it’s rare you hear niggas say he can’t feel you
But in your ears like he dope, just not dope enough
And the closest ho would be probin’ you to open up
And to do so you must roll one up
And it’s lonely at the top
They say me that they feelin me
I eat this game and shit this out
My dirty drawers got winning streaks
I’m in too deep, this industry is sayin to a nigga
Got change like them, just but ain’t changed like them nigga
They only fuck with my old shit cause I’m on shit
But I was potent in ’06, niggas slow as shit
Now my dreams is nothing more than minimal thoughts
And my cheese gonna fluctuate, though sleep is the cause

The idea behind ‘lovehate thing’ is what comes with shine. Passive aggressive hate from those closest to u. I feel like everybody can relate.

Well, I’ll tell you what, the staff at nappyafro can def relate. The better we get with reviews and talented staffers, the more hate and less recognition we get…okay, maybe I’m putting on. To a man though, each of us can relate as he said. The better your times get, the more detractors you run across. He’s not being facetious with this one at all. Like I said in the intro, as his star got brighter, so did the negativity as it relates to him. Maybe why that’s he chose such a honest, hard to debate title. As far as this particular song goes, the production crew samples a lil’ Marvin Gaye which provides a pretty dope backdrop to this song. Lyrically, he puts a lot into this one. Not that it’s complex but it’s actually quite wordy and in his typical quicker pace, so much so that I had to give it a few more spins than some songs just to digest it, but I get it, and I enjoyed it. I think one of the realist lines on this album is “I lost a lot of friends, and they ain’t even dead.”

3. Sunshine
Produced by Tone P & Stokley Williams
This may be my new wake up jam for a bit. Feeling like it borrowed from Marvin again and fully powered by soulful production and hook, Wale’s bars are damn near irrelevant to me on this. Gladly, he didn’t think so as he still shared some insightful and cleverly delivered bars:

Can do without opinions
Another brother caught up in the business
Had it locked since I lost my scholarship
I been gettin’ it to my old coach and ballin
Rose gold was forty Know these (niggas) recordin’
Make (niggas) grab the forty
See me I thought money would change it it got worse
But its alot better than screamin “who got work?” (who got work?)
I’m openin it from back to packin out 9:30
I never sold crack when crack rappin’ was workin’
With that fact its back packin’ and murkin’
Gettin’ that Bobby Heenan while you Mr. Perfect (missed her, perfect)

4. Heaven’s Afternoon
Featuring Meek Mill; Produced by Lionel Gray, No Credit, Stokley Williams, & Sam Dew
“Heaven’s Afternoon” is another song draped in positivity and confidence. Stating that he’ll pray for his haters before he’ll name them in a song, Wale and Meek attack another soulful track crafted by the production team with charisma and purpose. With shout outs to lost rappers, celebration of elevation and success, and a consistent message of progress, Wale uses this song as a Hip-Hop prayer to those he thinks may need it.

5. Golden Salvation (Jesus Piece)
Produced by Lee Major
This is the type of production we’ve come to expect from Maybach Music. Lush keys, big stadium sounding layered vocals and instruments, and finally something that may snap a few necks. Wale crafts what could easily make rounds in the Christian rap circles and one of his dopest songs period. Using the wordplay of “Everybody wants a Jesus Piece, but nobody wants to know Jesus’ Peace “. Wale calls out folks without naming names (Illuminati much) rapping from Jesus’ point of view. If you’re a lyrics guy like I am, this song will have you pressing rewind HARD.

6. Vanity
Produced by No Credit
Love the lyrics, hate pretty much everything else about this track. The hook and the music don’t move me at all and in context with the rest of the album, musically it stands out like a turd in a punchbowl. I’ve given this album a LOT of spins by now and this song hasn’t warmed up ton me at all. SKIP 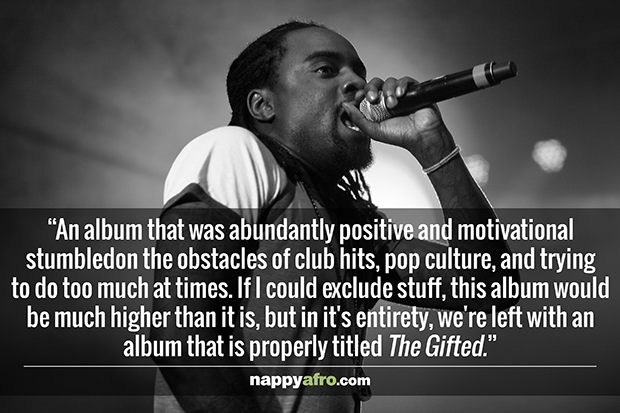 7. Gullible
Featuring Cee Lo Green; Produced by Stokley Williams & No Credit
Thank goodness for the return of form that is song 7. “Gullible” features the same soulful production that is dominant on this album. It could be argued that song is an even more socially conscious song than any of the previous ones. The song title says it all as Wale challenges our mindless digestion of anything that is fed to us through various media outlets.

8. Bricks
Featuring Yo Gotti & Lyfe Jennings; Produced by Cardiak & No Credit
Wale again takes aim at the not just the game, but black men in general being focused on the wrong stuff. Cardiak and No Credit compose a really big dramatic musical canvas for Wale to work with. It’s hard to say a lot about this track, sort of a theme with the album. You really need to hear it I think to gather it all. In any event, it’s a really good song where Wale transposes the BRICKS in the drug game and the BRICKS as building blocks to something greater. He tends to be very poetic in his songs and this would be one of the better examples of such.

9. Clappers
Featuring Nicki Minaj & Juicy J; Produced by Mark Henry Beats, No Credit, Juicy J
Obligatory banger here, nothing more or less. Wale is always sure to add some Go-Go to his albums and on this one, he makes it a club banger. I don’t need to go on, it works for what it is.

10. Bad (Remix)
Featuring Rihanna; Produced by MexManny
So I’m going to kill two birds with one stone here. “Bad” is a song that I started to like because I have Centric on in the mornings and it plays constantly there. So the original version with Tiara Thomas (song 16) is already a song I really like. Then with this album I heard the Rihanna version and I like it even more. The track is a little different but the play back and forth between Rihanna and Wale is pretty cool and adds another element to the song.

11. Tired of Dreaming
Featuring Ne-Yo & Rick Ross; Produced by Deputy & Corporal
Why this wasn’t chosen as a single, I have no idea. I mean, there is still time but the star power of Ne-Yo and Ross, the R&B track, and the LL’ness of the lyrics on this song about his dream girl are perfectly crafted for airplay. I will admit that I’m pushing this also because I want to see the video because I KNOW it will be amazing. Don’t take me saying it’s radio ready to mean that it’s a weak song, I really like it. I think most will that listen to it too.

12. Rotation
Featuring Wiz Khalifa & 2 Chainz; Produced by Travi$ Scott & AdoTheGod
This is the only other song on the album that I’m not really feeling. I’ve said this before on other albums, I prefer my weed rap to come from Devin The Dude and that’s about it. This song is simple from concept to delivery and there isn’t much else to say. It’s not a skip because you can vibe out to it I guess, but it’s not nearly on par with the bulk of the album.

13. Simple Man
Produced by No Credit, Ralph Folarin
By this point in the album, I’m starting to wonder if it were three songs shorter, would we be looking at a 5 star album. I don’t dislike this song but I won’t mention it as one of the high points of the album either. “Simple Man” is a simple song that is about just as it sounds, someone who doesn’t want or need a lot to be happy.

14. 88
Produced by Tone P, Just Blaze
This is another one of those songs to add to Wale’s poet profile. He uses wordplay to compare his career to Jordan’s dunks and career. It’s easy to overlook especially where it’s located on the album but is still worthy of being checked out. You could, even if you’re into starting drama, wonder if he’s saying that Wale is saying that he’s carrying his team like MJ…this team being MMG…

Bottom Line:
When I reviewed his last album, I quoted Wale’s statement of trying to make a classic album. I honestly thought we were on our way with this one and then there were some missteps. An album that was abundantly positive and motivational stumbled on the obstacles of club hits, pop culture, and trying to do too much at times. If I could exclude stuff, this album would be much higher than it is, but in it’s entirety, we’re left with an album that is properly titled, The Gifted. Talented beyond his sales and being unconventional in an industry that is plagued by the things he is attacking with this album, but it’s still missing something even with the third album. It’s not a matter of if Wale can construct a classic album, it’s when. I think the majority of this album shows you that he’s boldly getting closer and with the missteps listed, I wonder if getting away from MMG will be the move that gives him the cohesiveness to finally do it.

This album is his best project at the beginning, but it feels really loose and rushed on the back half, giving it a lower score.