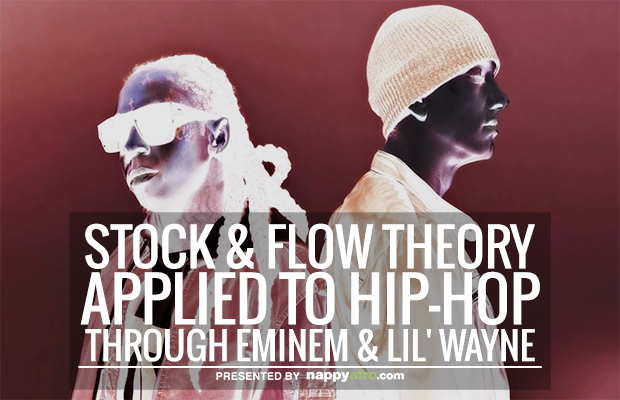 There’s a concept in economics called stock and flow that describes the difference between two general types of quantities. It usually describes different investments or financial endeavors but the same theory can be applied directly to Hip-Hop as well as other media.

Surely most of you already understand this concept, but applying it to rap music could really clear up some confusion. Robin Sloan explains the general terms applied to content on Snark Market.

Theoretically many Hip-Hop artists have both stock and flow in the form of albums and mixtapes, respectively. They use flow (mixtapes) to generate buzz and gain attention before they release stock (albums). Problems can arise when artists seemingly put too much effort into their mix-tapes and the quality in their albums suffer.

To make my point easily observable I’d like to apply this theory to Hip-Hop by comparing two artists at extreme ends of the spectrum with regards to lyricism, Eminem and Lil’ Wayne.

Eminem’s music is theoretically all stock. He meticulously writes his lyrics to perfection and doesn’t release it until it’s done, sometimes not releasing music for years.

Lil’ Wayne’s music is theoretically all flow. He doesn’t spend much time on any one track and, more so in his younger days, releases music constantly. (This new style of rapid and continuous content production that technology has allowed and encouraged is perfectly contextualized in this piece from The New Inquiry called Athletic Aesthetics)

The most obvious difference between each rappers’ music is the lyrical quality. Em’s music is clearly more developed and thought out while Wayne’s music is quickly thrown together off of the top of his head. One might assume that the former would be more successful due to his focus and drive to produce high quality work but that couldn’t be further from the truth. Both have achieved huge levels of success with drastically different styles. Maybe it’s the strict focus on one approach that led to their enormous success.

I think the misconception between the two styles leads to the main problem many people encounter when listening to Lil’ Wayne’s music. People compare his flow to another artist’s stock, which don’t compare well. They don’t realize that even Wayne’s albums are his flow. They get his new record, expecting stock, and are disappointed when they hear flow, the only thing he releases.

Flow is not to be interpreted as deep or intellectual, as stock can be, and shouldn’t be analyzed as such since doing so usually results in disappointment. Flow is supposed to be fun, playful, and, most importantly, disposable. Wayne didn’t dwell on writing any one track for very long so you shouldn’t analyze it as if he did.

The only situation in which we should compare stock and flow is if we find some kid whose flow kills an acclaimed artist’s stock, in which case we may have a prodigy on our hands. That should be the exception and not the rule.

I want to point out that Wayne does actually have some stock, but not much. I generalized his style for the sake of argument. Some of his songs like “Fuck tha World” and “Up to Me” are undoubtably stock in my opinion. These songs are more thought provoking, story driven, and focused on his past.

Arguments over which style is “better” are pointless and usually lead to nowhere. Some prefer to actively listen to a record expecting a deep expression from an artist. Others enjoy the fun and non-structured nature of flow. In the end, it’s all a matter of taste.