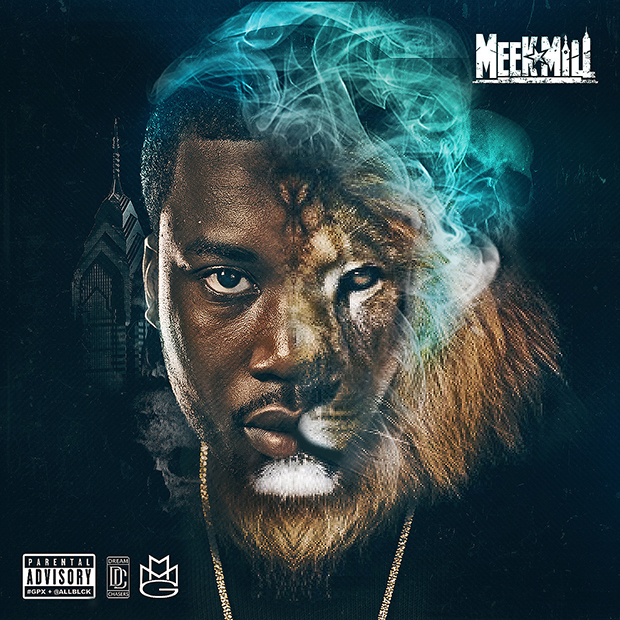 Meek Mill is one of the names mentioned in Kendrick Lamar’s “Control” verse to step their game up when it comes to the music they share. The Philadelphia MC has responded with “Ooh Kill Em” and less than a week after his label, Maybach Music Group, releases their third compilation album, the former battle rapper releases his latest solo project that has been anticipated for most of the year. DJ Drama plays host for the trilogy of the series about letting nothing come between you and manifesting your dreams into reality. It is 2013 and I have reviewed three mixtape hosted by DJ Drama. Me. This guy. Anyway, I liked the first Dreamchasers, there were a lot of songs I liked on Dreamchasers 2, but I still am not a big Meek Mill fan, maybe that will change.

1. I’m Leanin’ (Intro)
Featuring Travis Scott, Birdman, & Diddy; Produced by Cardo
Continuing where he left off with the Dreamchasers 2 song, “Lean Wit It”, Meek Mill opens with a song about him over the competition. When I first heard the production I thought it was a Travis Scott beat, before I knew he was actually on the song. I’m disappointed by the ish talking by Birdman & Diddy lately. I’ve heard better from them in the past.

2. Make Me
Produced by Super CED
If you want to hear Meek Mill sound like Drake then this song is for you, not me. Skip!

3. Dope Dealer
Featuring Rick Ross & Nicki Minaj; Produced by Key Wane
Great performances here from all three artists as they all use the same flow popularized by Future on “Karate Chop.”. While I am tired of hearing about girls going to the guys with the dirty money instead of the guys with the clean image, this is a song I play repeatedly.

4. Lil’ Snupe Skit
On this song listeners get evidence of why the loss of 18 year old, Jonesboro, Louisiana rapper, Lil’ Snupe was a major hit to a lot of people that knew about his potential. For 3 and a half minutes the young Dreamchasers artist freestyles about various topics at random about his life, the infamous battle, meeting Meek Mill, and living out the dreams of his family. R.I.P.

5. Lil’ Nigga Snupe
Produced by Boi-1da
With this song, I understand why Meek has fans arguing that he is one of the best rappers out now. When it comes to serious topics like life and death, he is at his best. On here he talks about violence in the hood and its effects on the youth. He wants to protect the kids in poverty and himself from being victims, but still watches them because they could be assailants and might get him. It is unfortunate that Lil’ Snupe had to be a victim.

6. Ain’t Me
Featuring Yo Gotti & Omelly
Why, oh, why did they decide to use Auto-Tune on this song? It kills the song but if you can manage to make it past the sound of the vocals you can enjoy a good song. I can see this being played on the radio because of its similarities to his single, “Young and Gettin’ It”.

7. I B On Dat
Featuring Nicki Minaj & Fabolous; Produced by Southside & TM88
The introspective moments are over and the fun begins as we enter the strip club, hey, look, there’s French Montana. I like Meek’s verse but I couldn’t stop imagining Lil’ Wayne doing this exact same verse. I listened closely and hear a Weezy influence on the Philadelphia rapper so much I expected him to say “Young Money” at the end. What’s a trip to the pole emporium without a female opinion as Nicki Minaj comes through giving a shout out to Eve and her past while denouncing other females that try to study and watch her too closely. Also, it’s amazing how on this song and her other feature, she mimics Meek’s flow to perfection on her verse, listen closely to the similarities.

8. Hip Hop
Produced by Tone Beats
This is the type of rapping I expect from Meek Mill. With a past in battle rapping, I expect him to be more lyrical.

9. Money Ain’t No Issue
Featuring Future & Fabolous; Produced by Cardo
That moment of deep thought was short, back to the money. Shout out to Cardo on the production, I always wanted to know what a trap beat sounded like with the piano styling of Mozart and a Rock guitar riff. Add a hook from Future Vandross and you have perfection. I wish Future took off the Auto-Tune for his verse because I haven’t heard rap in a minute since “Itchin'”. By the time, I got to Fabolous’s verse, I forgot it was Meek Mill’s song or that he was even on it.

10. We Aint The Same
Featuring Omelly & Louie V Gutta
I downloaded this mixtape from Livemixtapes when it first came out and I didn’t have this song. Thank God! Meek Mill doesn’t appear on the song and he shouldn’t since he already made the same song with Yo Gotti & Omelly 4 songs ago. If he wanted to showcase his Dreamchasers artists he should’ve had picked a different song to include on here. 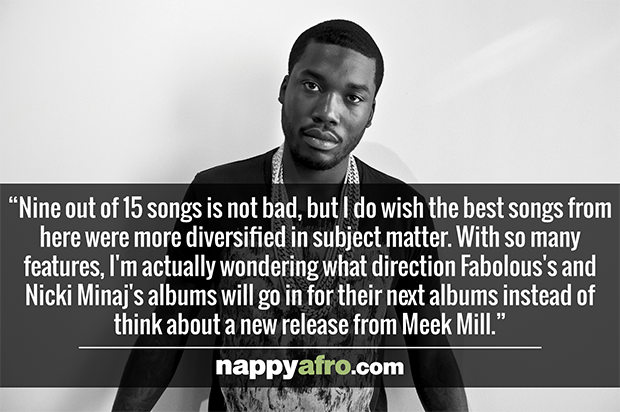 11. Heaven Or Hell
Featuring Jadakiss & Guordan Banks
We get back to introspective Meek as he continues to rap about the dichotomy of decisions. You can have dreams or nightmares, like his album, and you can either go to Heaven or Hell. For Jadakiss, I’m just going to leave his verse here for your own interpretation:

Yeah, I used to pop a lot of shit, now I keep it moderate
These niggas know I been iced out, hopping out of shit
Right now I’m praying for my son to get this scholarship
A nice university, one of these black colleges
Far as the hood go, I acknowledge it
But whoever ain’t a snake usually a follower
Luckily, I can tell a difference
My man coming home, my other man getting sentenced
Soft niggas usually send the hate through the bitches
Jealous Instagram niggas hating on your pictures
We dream chasing, y’all niggas walking behind wishes
Without working for it, not often you find riches
Some niggas find coffins others just find ditches
Just ask around ’bout the militia, they malicious
D-Block, finish that and cop more dope
I’m two-stroke, you four-stroke
If you got enough cigars we can all smoke
Ain’t nothing all good when you all broke
So we could never be equal
Never bite the hand that’ll feed you
Never fear a man if he bleed too
Some niggas need a head shot, some niggas need two
Play sweet in these streets and they’ll leave you
You can’t see the devil, he’s see through.

12. Fuckin’ Wit Me
Featuring Tory Lanez; Produced by The Mekanics & Scott Storch
Has Meek Mill told you that he’s better than you yet? Here is another song about how he rose to money, drinks, cars, bitches (even yours), and how hating on him didn’t help your situation, but only motivated him. Skip.

15. Rich Porter
Featuring Rick Ross; Produced by Rio
Rick Ross appears on another song about imagining yourself as a successful drug dealer. It’s really not great though. Skip.

16. Right Now
Featuring French Montana, Ma$e, & Cory Gunz; Produced by Rio
If you don’t want to hear Ma$e use the n-word a lot and claim to be back on his Murda ish, than you can skip the song. Three NY rappers on this song and nothing really memorable lyrically. If I had to pick, I would say Cory Gunz had the best verse on the song because Meek goes first and disappears quickly and French Montana only does the hook as he did on his other two features. I can’t help but think about his interview with Nardwuar talking about his battle rap days. If he had a day could write a hot 16? It takes him a day to write a hot verse? Skip!

17. The End (Outro)
Produced By Black Metaphor
Dreamchasers 3 closes with the second song on the project with no features. Just like “Hip Hop,” everything in his life gets mentioned: his bank account, past T.I./Grand Hustle affiliation, and of course the criticism of his constant yelling and talking about money get answered, two reasons that kept me from being a fan of his work, but he shuts me up with the lines:

These broke niggas say I talk too much about the money
That’s what we do it for the love of the money.

Money is the motivation. The song ends with Allen Iverson’s “Practice” rant and a snippet of a new song.

Bottom Line:
Nine out of 15 songs is not bad, but I do wish the best songs from here were more diversified in subject matter. With so many features, I’m actually wondering what direction Fabolous’s and Nicki Minaj’s albums will go in for their next albums instead of thinking about a new release from Meek Mill.