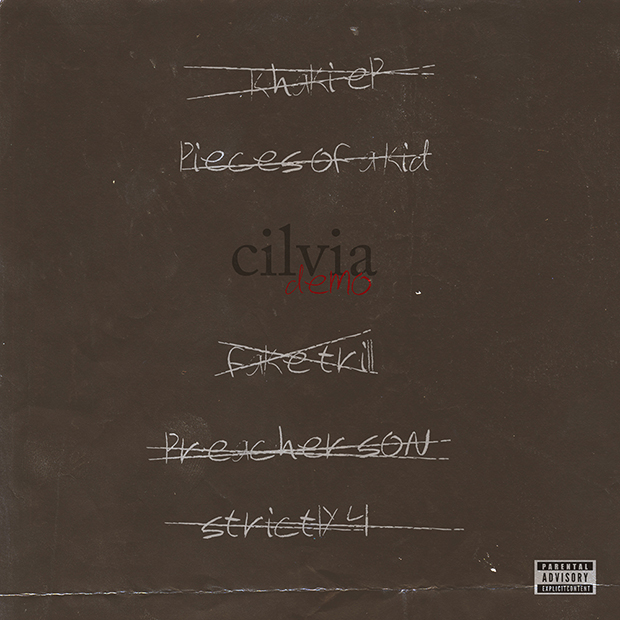 The first time I saw Isaiah Rashad he was swinging his arms around like a mad man on BET’s annual Cypher standing next to the entire TDE crew. Isaiah Rashad is the one of the new members of the TDE camp (along with SZA). Funny enough he is also the first member of the crew to drop a project off to the masses in 2014, and since Kendrick Lamar put out his classic debut. Earlier this year Top Dawg himself promised that 2014 would see multiple releases from the Cali imprint. So to start the year we get to meet Isaiah Rashad.

Isaiah Rashad is a rapper from rapper who is from Chattanooga, Tennessee. He grew up listening to the likes of Too $hort and Scarface as a toddler with his pops late at night. As he grew up and began considering his what direction his life would go, he began considering dedicating his life to ministry. However, in middle school his step brother let him borrow ATLiens by Outkast. This began his path to becoming an Emcee.

Let’s get into what Isaiah brings to the game.

1. Hereditary
Produced by Ross Vega
This is the intro and it starts off with an eerie sound, although this song doesn’t have a traditional format, it does have a presence to it. It leads you to believe that this project will be a story about coming of age. Nice intro and pretty creative.

2. Webbie Flow (U Like)
Produced by Mr. Carmack
This song is really the introduction in a way. He raps about himself and who he used to be. He creatively gives a slew of facts about him throughout the song. It is short, but it does what it is intended to do.

I done grown up for my child sake, black and mouth face
Look up loud place, never crowd place
Never skirt chase, maybe first grade
Never last place, never had brakes
Pop a transmission, always had faith
Always had trace, always had James
In that duplex, hit a suplex, fuck a crew neck
Spottie solo up in that recess
Never regress, Georgia peaches
Grab her cheek ass, such a slut-bag
Baby nut rag, never cuff that
Love a hood-rat where there’s puss at
Barely have me going on that Sosa, I never go back
I never hit it raw again, fucking with the law again
Picking up trash on highways, never my way
Blase blase, sneaking shotty
Fuck a Friday

3. Cilvia Demo
Produced by Mr. Carmack
Carmack gives Isaiah a really smooth beat to rhyme over. Imagine an instrumental Curren$y would love to rhyme over. This is a dope song to ride around to, but it really doesn’t have a concrete message to it. It seems like a ton of unfocused ideas, but that isn’t a bad thing. I fuck with it.

4. R.I.P. Kevin Miller
Produced by Black Metaphor
“Y’all live for bitches and blunts, we live for weed and money”. That is the hook and it is extremely catchy. The verses at first seem completely shallow, but after a few times listening to it you hear that it is actually deeper than you first realized. He touches on multiple subjects like the drug game, corrupt police, and his addiction to things he knows are terrible for him spiritually as well as physically. The instrumentation that Black Metaphor supplies are amazing as well. It again sounds like something Curren$y would rap over.

5. Ronnie Drake
Featuring SZA; Produced by The Antydote
This song features the other TDE newcomer SZA. This is the most direct song on the project so far. This is a song about the plight of black people. The hook, which is delivered perfectly from SZA, alone gives you great insight to the direction the song takes:

Still the second verse is the best part of the song:

They don’t kill you cause you black today
They only feel you when you pass away
The eulogy be so moving
We live the scenes of those movies
Conflicts in school or dope moving
It’s so youthful, but if you die today
I hope you find some relief in what a great escape

So far this is the standout joint.

6. West Savannah
Featuring SZA; Produced by The Antydote
So this is obviously inspired by Outkast. If you didn’t know the Kast had the a song on their album, Aquemini, with the same name. Isaiah is definitely doing his best Andre 3000 impression with the “kind of rapping-but really singing” thing he has going on here. SZA makes another appearance on this album. Once again she has a big hand in the hook and it may be the best part of the song:

7. Soliloquy
Produced by Farhot
Farhot gives Isaiah the hardest sounding beat thus far. The beat also brings out the most aggressive sounding verse so far. The only thing about this song is it is too short. It feels like he is just getting better on the track, which had me excited for the second verse, but there wasn’t one. 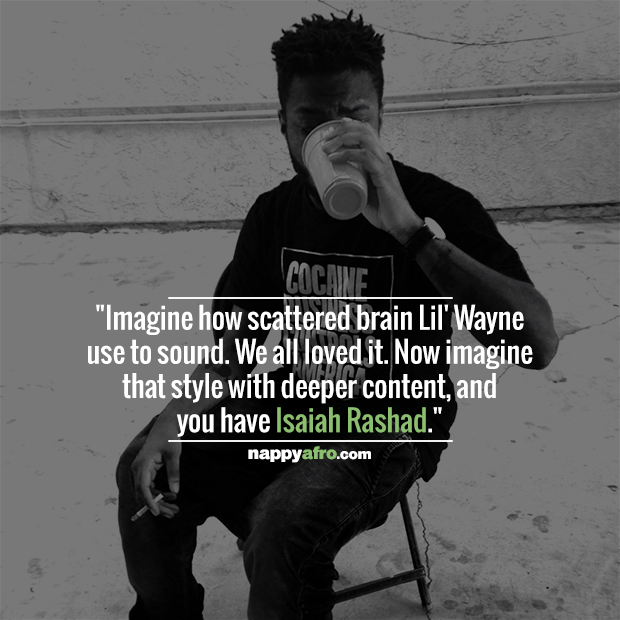 8. Tranquility
Produced by Farhot
The song here is perfectly titled. It is definitely somber. Yet the aggressive rhymes that we heard on “Soliloquy” are still apparent. Here we hear the young emcee questioning life and the intentions of people. This is another deep song. He reflects on what he sees in people and even himself. At one moment he asks himself if his son will grow to trust him. At one point he even says, “I’m just hoping that she praying while she down on her knees/See I often treat these hoes like their fathers would be/Good Lord, my flaws, blind you, mind you, got time for it, my flaws”. I’m a big fan of this one.

9. Menthol
Featuring Jean Deaux; Produced by Sounwave
I’m not really feeling this one. Maybe I will in time, because I can’t really point out what it is that I’m not feeling. Maybe it is just out of place. It’s a shame because Sounwave may be the best producer on this project but it wasn’t that great.

10. Modest
Produced by Chris Calor
This has a lot of religious and Hip-Hop references that you will catch a little bit at a time. Honestly, this is kind of lackluster. The beat is dope, but he really doesn’t have any direction.

11. Heavenly Father
Produced by D. Sanders
This is another introspective song. The first two verses are a little sing-songy, but the final verse is definitely a high point:

I find myself waiting for the last verse every time I listen to this song.

12. Banana
Produced by The Antydote
This is a song where he seems to be focusing his anger towards a lot of issues in his life. The one that stands out is his father, but this is probably the third or fourth time he has expressed anger towards him, so at this point it’s a little redundant. If this was a standalone it would be great, but it seems to be a little repetitive.

13. Brad Jordan
Featuring Michael Da Vinci; Produced by Danny Dee
For those of you who don’t know, Brad Jordan is Scarface. Here we hear Rashad comparing himself to Scarface. He uses quite a few Scarface’s references. So many I’m sure I missed some. He also refers to other southern rappers. The beat is also very much inspired by Southern Hip-Hop. I really liked this one too. It’s cool for a rapper showing appreciation to someone who has done so much.

14. Shot You Down (Remix)
Featuring Jay Rock & ScHoolboy Q; Produced by Chris Calor & The Antydote
Can I just say that Jay Rock has been killing every instrumental that his voice has been on for the last two years? This is not any different. Anyway the first time I heard any of Isaiah’s music was on the original version. I wasn’t really feeling it, but it should be mentioned I saw it on 106 & Park and it was the edited version. Now I really like this joint. Jay Rock and Q both killed this. Having two of the TDE veterans on the last song is a brilliant way to end your first offering to the world.

Bottom Line:
Isaiah Rashad drops an interesting project. If you are a Hip-Hop head you will really appreciate all of the subtle references that Isaiah cleverly implemented into this nice piece of work. If you aren’t a big fan of Hip-Hop you will still find this extremely entertaining due to the energy and obvious hunger this young emcee displays. As stated earlier Isaiah considered living his life as a preacher. With that kind of lifestyle comes quite a bit of thought about some of life’s biggest mysteries. We see him verbalizing quite a bit of those questions on this, and outside of one rough patch on the project, he does it as well as any other artist.

Now he is no Kendrick Lamar, no not at all. Kendrick is often very direct. He often tells stories that have an A-Z format. Isaiah however may start at D, then touch Q, jump to K, before we ever even hear A. Not a bad thing at all though. Imagine how scattered brain Lil’ Wayne use to sound. We all loved it. Now imagine that style with deeper content, and you have Isaiah Rashad.