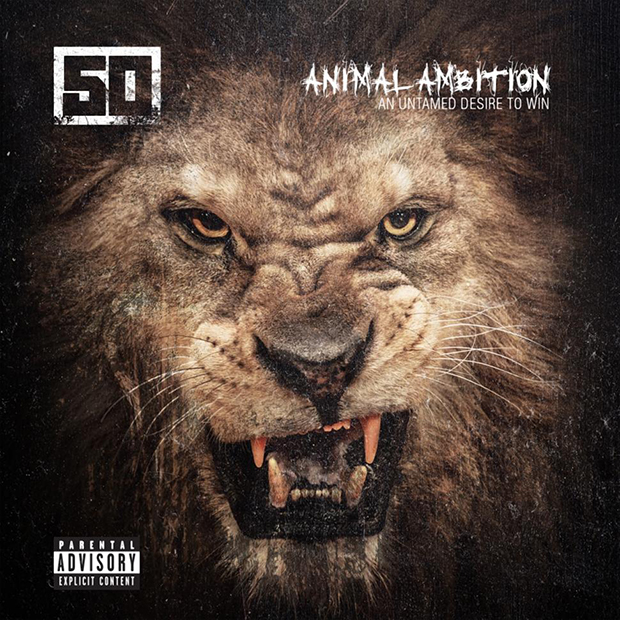 You got to hand it to 50 Cent; it’s been 2009 since his last official project dropped, but he still knows how to drum up attention for an album release. In the weeks leading to the release of his fifth studio album Animal Ambition, he’s caused a spectacle out of throwing the first pitch at a Mets games, possibly orchestrated a chain snatching a Summer Jam, and (most importantly) reunited with the original members of G-Unit. But all theatrics aside, let’s check out the music. Animal Ambition: An Untamed Desire To Win. 50’s back.

1. Hold On
Produced by Frank Dukes
Since it’s been a minute since 50 has released a new album, I figured we’d get some sort of shit talking intro. Nope, we go right into the first song and it feels like old times. The production and lyrics feel like it’s from a 70’s Blaxploitation starring 50 Cent as a old hustler coming back to his old stomping ground. (If that makes any sense). Since the soul loop doesn’t change much, some may find this boring but it’s definitely 50’s style.

2. Don’t Worry ‘Bout It
Featuring Yo Gotti; Produced by Charli Brown Beatz
At first, the combination of Yo Gotti & 50 Cent seemed weird but then I forgot that Curtis Jackson was a Southern sounding New York rapper before it was cool. Even though the synth heavy song can be repetitive, the beat and hook are catchy (“Don’t worry ’bout a mothafuckin’ thing!”). A win for the clubs.

3. Animal Ambition
Produced by Swiff D
The album’s title track features 50 Cent at his most braggadocious. It also may be my favorite track off Animal Ambition. The Swiff D provided production is well crafted (complete with animal sounds) and gives Curtis Jackson space to talk his shit:

You see me stunting with my diamonds on, everything proper
Your shit look grown and your shit look copper
It’s turning, homie, that’s why you’re turning on me
Admit it, I made it, I can’t be faded

4. Pilot
Produced by Shamtrax
First off, the whole “Me, I’m like a pilot, G5 Jet I’m fly as shit” is kinda lame. The production is a combination of pimp rap and Jay-Z’s “Tom Ford”. I guess it works but this is where the problems arise. The lyrics for the first four tracks on this album are interchangeable and the productions may be too similar. Not a terrible song but I had to point that out.

5. Smoke
Featuring Trey Songz; Produced by Dr. Dre, Dawaun Parker, & Mark Batson
Even though this album doesn’t have a traditional single (50 has basically released all the album tracks as singles), you could look at “Smoke” as the main single (It’s the one he performed on Good Morning America). And it sounds tailor made for the radio too. It also a little too predictable (“You like smoke and you got me high”) and a little outdated (In a recent interview Trey Songz said the song was a few years old). This track also features a rare production credit from Dr. Dre himself.

6. Everytime I Come Around
Featuring Kidd Kidd; Produced by Steve Alien
With Kidd Kidd in tow, things get a little more menacing on “Everytime I Come Around”. It’s your standard affair and I can look past a hook that includes lyrics like “Ring around the rosies, pockets full of OZ’s”. Why? Because Kidd Kidd surprising stole the show with his verse:

Don’t know voodoo but I sure know how to shoot you
If I get caught I don’t boo-hoo, I pick up the phone call Boo Boo
He gonna bail me out in seconds, please don’t let this rap shit fool you
I send shooters to your home, see I don’t need no songs to move you 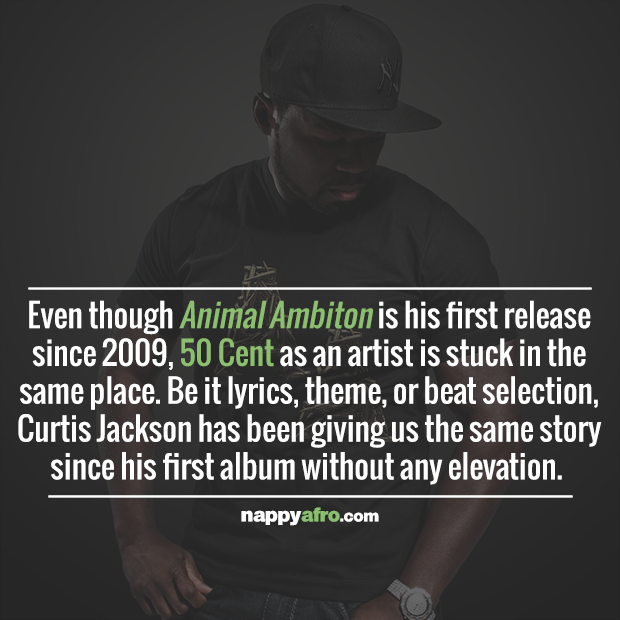 7. Irregular Heartbeat
Featuring Jadakiss & Kidd Kidd; Produced by G Rocka & Medi
I see what 50 was going for here. It’s a song basically about scared dudes (“Nigga, you pussy, you scared/I can hear your heartbeat”) so not only are the lyrics low tone and intimidating but the beat mimics a heartbeat. I give points for the creativity and of course who doesn’t like seeing Jadakiss & 50 Cent on the same track, but the beat kinda drags this one down.

8. Hustler
Produced by Jake One
Seeing Jake One name on the production gave me immediate hope for this since because besides being a producer I look out for, Jake have been putting regular work in with 50 since Curtis. And the actual results aren’t bad at all. For one, hustling is probably 50’s favorite subject besides beef. The production is more West Coast that I expected but it works. You even get a patented 50 shit talking outro. I would have switched this out with “Funeral Music”, another Jake One production that’s on the deluxe edition of this album, but this is cool too.

9. Twisted
Featuring Mr. Probz; Produced by JustHustle & Kyle Justice
“Twisted” is all about the celebration of getting out of the hood and making it too the top (“We done came so far, I mean, look where we are/If they don’t call us by name they call us entrepreneurs}). The song ends up sounding a little lazy from the lazy hook to including all the tropes you heard before from other rap songs of this theme. Still, this song might have worked better at the end of this album.

10. Winners Circle
Featuring Guordan Banks; Produced by Ky Miller
If 50 Cent was trying to make a song that gets used in inspirational sport commercials, he achieved it with “Winners Circle”. And that’s not necessarily a good thing either; the song comes off as generic with lyrics talking about the mountain top and the sky not being the limit. Don’t be surprised if this pops up in a Street King ad.

11. Chase the Paper
Featuring Prodigy, Kidd Kidd, & Styles P; Produced by Ty Fyffe
You know what would have made this song much better? The rest of G-Unit. It feels like this song was made to feature Lloyd Banks, Tony Yayo, & Young Buck but at the time of the recording, they weren’t on good terms with 50 so he just put Prodigy, Kidd Kidd, & Styles P on here instead. That being said, this song is good because it has more of a mixtape 50 Cent vibe. For sequencing sake, it being the last song is kinda weird but the album does end on a good note. You chase the hoes, 50 chases the paper.

Bottom Line:
When I first heard that 50 Cent had parted ways with Interscope Records, I thought his next album would give him more freedom. The thing is, even though he’s no longer a part of the Aftermath/Shady Three Headed Monster, this album still sounds like same 50 Cent. And that’s the major issue with Animal Ambition; even though this is his first release since 2009 50 Cent as an artist is stuck in the same place. Be it lyrics, theme, or beat selection, Curtis Jackson has been giving us the same story since his first album without any elevation.

The bright side of things is that there are glimpses on this album of 50 Cent being the best 50 Cent. Songs like the title track “Animal Ambition” & “Hold On” remind why you liked 50 in the first place. Also, Animal Ambition may be just a primer for the long promised Street King Immortal. (After all, Animal Ambition started out as a mixtape) If you’re a die hard 50 Cent fan, this album will make you happy. If you are here looking to see if 50 Cent has broaden his spectrum, you might have to come back and check in on the next go around.