Jeezy – Seen It All: The Autobiography [Review] 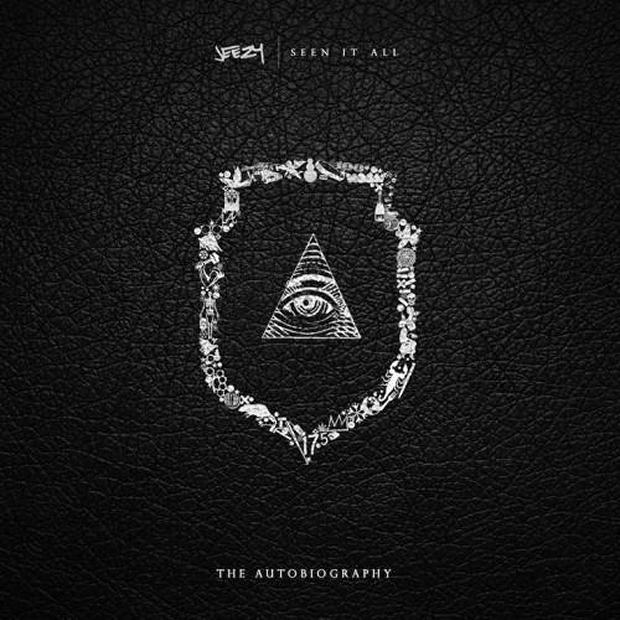 In the mid 2000’s Jeezy was the guy when it came to having turn up music, but then something happened. Rick Ross came in and stole his spot after he began to try too hard to become a more inspirational rapper (“My President Is Black” may have been his downfall). Jeezy seemingly noticed this and went into an all-out lyrical war with the aforementioned Rozay. Did Jeezy win? No. Did Rozay destroy his career like 50 did Ja Rule? No. Jeezy just sort of existed afterwards. He has dropped an album and a few mixtapes, but this may be the most anticipated album from Jeezy in years. Check out how Jeezy describes this album:

A lot of y’all know when I came in the game, I pretty much came in the game with my hands behind my back. ‘Cause a lot of the shit I’d like to talk about or could’ve talked about probably would have got me in a lot of trouble. This is probably my first album where I can explain and let niggas know where I stand. In layman’s terms, the statute of limitations is over with.

With comments like that I instantly began to get excited about Jeezy’s album Seen It All: The Autobiography. Let’s see if he can drop another great project, like he did back in his heyday.

1. 1-4 Block
Produced by Childish Major
This is classic Jeezy. Childish Major blessed Jeez with a hard hitting, street influenced beat. The beat alone gets you hype for the album. Jeezy is doing his thing with the drug raps. This is why people loved him to start.

2. What You Say
Produced by Childish Major
Childish Major is back on the beat with this one as well. I wouldn’t be shocked if this was the next single. Jeezy is still going in with the drug rap, but that’s why we love him right? My favorite part of this joint is the end when Jeezy is talking his shit. The only person in the game who does it better is T.I.

3. Enough
Produced by Kenoe
Although the instrumental is in the same vein as the first two tracks, the content is completely different. Don’t get me wrong, Jeezy is still going in with the drug raps, but he has also sprinkled in some motivational words. Quotes like “If you grind strong enough, you can be a trap star” made me laugh, but this is still a great song.

4. Holy Ghost
Produced by Don Cannon, Lile LeDuff, & Frank Dukes
This song actually has quite a bit of a regretful undertone. Think of Reasonable Doubt watered down, and you get the emotions of this song. The hook sums it up perfect.

This isn’t Jeezy reinventing the wheel, but you can still rock to it.

Sidenote: The remix with Kendrick’s verse is even better than this.

5. Me Ok
Produced by Drumma Boy
This is the first single for the album and it knocks. The first time I heard it I was actually hooping and I instantly loved this joint. It’s classic Jeezy.

6. Been Getting Money
Featuring Akon; Produced by Childish Major
I can’t remember listening to too much Childish Major, but again he drops a jewel. He’s 3 for 3 and perfect from the field right now. I feel like if I say Jeezy is on his drug rap game again, it will read as though the album is boring, but to the contrary. This is refreshing to hear Jeezy get back to his roots. With Jeezy doing his thing and Akon on the hook, this is another winner. 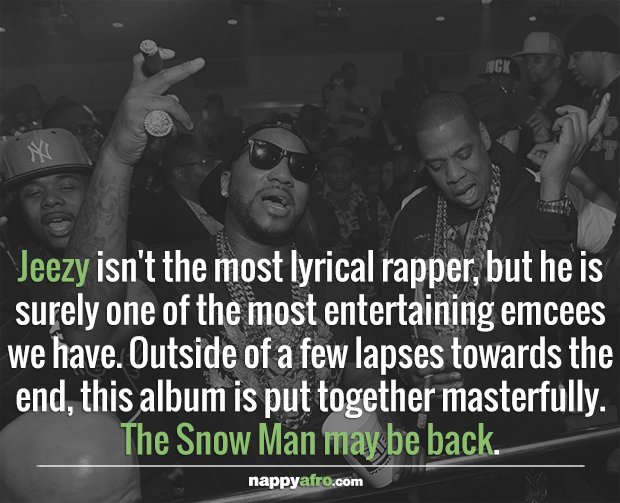 7. Seen It All
Featuring Jay Z; Produced by Cardo
Cardo gives Jeezy the most somber instrumental up until this point. That says a lot, because on some rappers albums this would be the hardest hitting song on their stuff. Jeezy also drops his most potent bars up until here, but Hov steals the show, as he’s known to do.

Uncle died on the spot
Pop killed the family with heroine shots
Gave my life to the block
Figured I get shot least I die on top
I came alive in the drop
Big body all white shit looked like a yacht
I got a five grand a pop
I had a plug in Saint Thomas on a trillion, watch
Flew him back to the states park 92 bricks in front of 5 60 state
Now the Nets don’t throw from where I used to throw bricks
So it’s only right I’m still tossing ’round Knicks, uh
Probably want your auntie a couple bags
I probably front your uncle a couple halves
Was in the S-Class you was just in class
You know I was finna blow like a meth lab
Expanded the operation out in Maryland
Me & Emory Jones in the caravan
Took the show on the road out in VA
Dropped a couple off with Rolla in the PA (Real Rolla!)
Plug got shot started slowing up
Took a trip down there to see how he was holding up
The wars on now he got shot again
This time he was gone for good then we got it in
Emory got knocked we was down 10
The whole team hot, wars closing in
Nigga’s can’t tell me shit about this dope game
‘Bout this cocaine, man I done seen it all

This is a standout.

8. Win Is A Win
Produced by Black Metaphor
This is a short track. This is really no more than Jeezy reflecting on his drug dealing days and watching his peers not making it to where he is. Short and sweet, it’s only about 1:35.

9. Beautiful
Featuring Game & Rick Ross; Produced by Black Metaphor
It’s still crazy to me to hear Rozay and Jeezy on a track together. I partially blame Ricky for Jeezy’s career sputtering for a little while. Here they are though, with Game. Well….. with the street most street rappers on the track, they steer clear of what people wanted to hear them rap about. I’m not feeling it. It just feels too soft.

10. Beez Like
Featuring Lil’ Boosie; Produced by Will-A-Fool
This is another reflective joint. Jeezy gives Boosie an opportunity to shine. Although this doesn’t sound like the rest of the album sonically, it still fits because of the subject matter. It’s ok. Ehh.

11. No Tears
Featuring Future; Produced by Mike WiLL Made-It
Jeezy grabs the industries main feature child right now. The album has been slowing down for the last two tracks, and this one is no different. I’m a little bored at this point. Nothing too special here. Maybe my first skip.

12. How I Did It (Perfection)
Produced by Black Metaphor
Thank God!!! Jeezy finishes the album on a high note. This is the perfect way to finish an album. The final verse sums it all up:

I’m the king of the kitchen now, this is my sink
I’m the king of the kitchen nigga this is my stove
That’s why I got my own lane, bitch I made my own road (That’s right!)
Now I’m movin’ weight like a trainer and a diet
Used to put the work in a bag and then I tie it
Flashbacks I can’t deny, but you tell them police ass niggas “Bitch I’m retired”
That’s why I do it for the ones in the street, ones in the cage
All the shit I’m goin’ through, I should be askin’ for a raise
Don’t get to talkin’ this work, I made millions

Bottom Line:
Much of this album was drug rap over hard hitting beats, which is what anyone who has listened to Jeezy in the past would expect. It was much of the first 75 percent of the album, but it wasn’t bad. Many rappers can’t stick to one subject for an entire project and keep it entertaining, but Jeezy did. He isn’t the most lyrical rapper, but he is surely one of the most entertaining emcees we have. Outside of a few lapses towards the end, this album is put together masterfully. The Snow Man may be back.