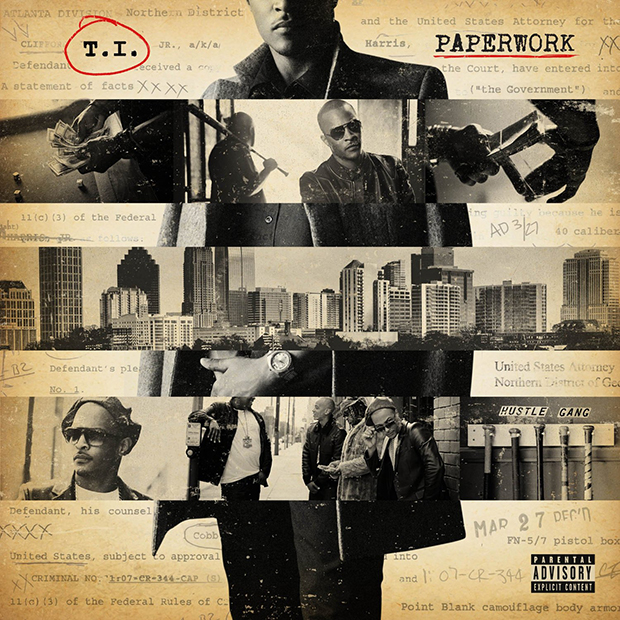 Paperwork is the 9th solo album by the self-proclaimed “King of the South”. T.I. has evolved quite a bit since being released from prison. His new found hustle, reality TV, has made him more and more of a household name. This new hustle has seemingly pushed the rapper further away from the mic and more towards the bright lights of Hollywood. T.I. seemingly noticed this and gave Paperwork a subtitle of “The Motion Picture”. Is T.I. still the King? Can he still make a dope album? This album will answer a lot of questions.

1. King
Produced by Mars of 1500 Or Nothin’
The album starts off with T.I. talking his shit as only he can while the beats slowly becomes more prominent and establishes the intense baselines. One thing T.I. always is able to do is start his albums with outstanding tracks, and this is no different. T.I. is here to remind us that he is still the King. Great start to the album.

2. G’Shit
Featuring Jeezy & WatchTheDuck; Produced by Pharrell Williams
Pharrell laces T.I. with an instrumental that reminds me of “BBC” from Magna Carta Holy Grail. Although the sound is different you can tell that Pharrell has been heavily influenced by Jazz and Blues as of late. Anyway, this sound is okay, but it definitely moves away from what I was expecting to hear after the opening track. For the ignorant people who think T.I. has a “Kindergarten Flow” this track will not change their mind. Jeezy doesn’t really fit on this either. Ehh…. Pass.

3. About the Money
Featuring Young Thug; Produced by London on da Track
The ladies love this song. It’s a banger. I mean for what T.I. was trying to make this it’s okay. I still can’t understand Young Thug though.

4. New National Anthem
Featuring Skylar Grey; Produced by Tommy Brown
Here is a great example of how versatile T.I. can be. After the last track being completely superficial we hear Tip going in on being Black in America. Skylar Grey does a great job on the hook, “Home of the brave and free/Free just to murder me/ Land of the beautiful/ Cursed by the hate we throw (You’re dead if you ain’t got one)/Is this the new national anthem?”. The beat is beautifully simple. Standout track so far.

5. Oh Yeah
Featuring Pharrell Williams; Produced by Pharrell Williams
This is a dope song. Pharrell has produced a song that has a hymn that you may hear at your local church and light synths that T.I. rides perfectly. The first verse really hypes me up:

ATL, Westside, that’s the only home I know
In ’85, me and Uncle Quint used to ride around in the big Bronco
Took me up to Charles’ Disco
Daytime, set me down at the bar
Where I drank Shirley Temple
‘Til he walked out with a bag and we got back in the car
What you wanna be he asked? When you grow up big kid?
I just wanna be like you, ridin’ round town gettin’ bread
We shot a couple Lac, couple summer pass
Uncle Quint ain’t nowhere to be found
Later we learn that someone ratted him out
For that reason 10 years he won’t be around

My only problem with this is it feels short.

6. Private Show
Featuring Chris Brown; Produced by Sak Pase & Ace Harris
I’m not big on overly explicit sex songs. Well…… that’s what we have here. T.I. and Chris Brown connect for a radio friendly song (once edited properly). I’d be shocked if this isn’t a single

7. No Mediocre
Featuring Iggy Azalea; Produced by DJ Mustard
This is T.I.’s current single. It features everyone’s favorite rapper not named Nicki Minaj. I can’t say that I’m feeling this either, but I understand the radio appeal. 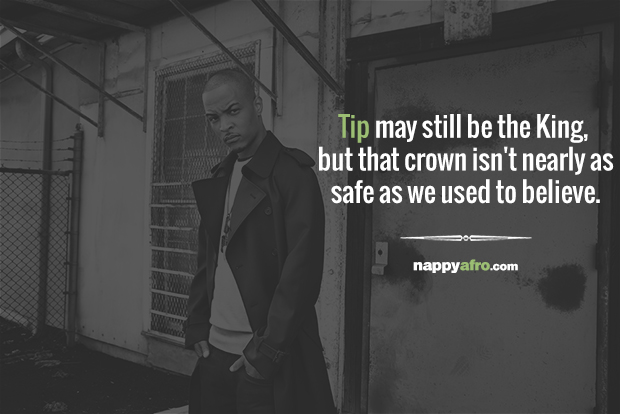 8. Jet Fuel
Featuring Boosie Badazz; Produced by The Beat Bully & Kenoe
It feels like Boozie has been on a tear lately. He was also on Jeezy’s last album. Anyway this song is somewhat reminiscent of T.I.’s earlier days. It’s full of swag over a hard-hitting yet smooth beat.

9. Paperwork
Featuring & Produced by Pharrell Williams
Is this Tip’s album or Pharrell’s? I mean I know he has had a big part of the production burden on here, but his voice is all over it too. On top of getting tired of hearing Pharrell, this song sucks. Nothing much else to say about this except, Skip, maybe even a delete.

10. Stay
Featuring Victoria Monet; Produced by Tommy Brown
Here we find Tip giving his best Drake imitation. The beat is produced by Tommy Brown, but it has a feel to it that makes you think 40 could’ve produced it. This is another joint that sounds like it could be on the radio, but it also sounds like it is a little personal as T.I. and Tiny are having issues. Although I don’t rock with this like that, Victoria Monet really does her thing on the hook with the vocals.

11. About My Issue
Featuring Victoria Monet & Nipsey Hussle; Produced by DJ Toomp
Thank God!!! We get a DJ Toomp sighting. The beat is lightly sprinkled with light synths, but the horns and strings are the star of this instrumental. Victoria Monet makes another appearance and she kills the hook again. T.I. is actually telling short stories in both verses. Nipsey drops a nice verse on here too, but I don’t know if he was needed. I would’ve preferred the 2 verses from T.I. and the hook from miss Monet. That would’ve sufficed to me.

12. At Ya’ Own Risk
Featuring Usher; Produced by Mars of 1500 Or Nothin’
The beat is a little odd….. The subject matter is as well. Usher and T.I. go back about taking a dudes girl, even if it means taking his life. It also talks about turning her out and having her trying girls. Kind of predictable. I mean, what else does Usher talk about anymore? Not my cup of tea.

13. On Doe, On Phil
Featuring Trae Tha Truth; Produced by DJ Toomp
Toomp is back! T.I. is rapping like the T.I. I love, but at this point, so many songs aren’t really talking about anything, this one just falls to the waist side. Although this is supposed to be dedicated to his homies who have fallen, it doesn’t really have any strong emotion behind. Trae the Truth doesn’t do anything for me on here either. At the end of the track, Tip talks about Doe and how Pharrell wanted to meet him but he passed away before getting the chance. Still, this song wasn’t a homerun but it does go into the next song perfectly.

14. Light Em Up
Featuring Pharrell Williams & WatchTheDuck; Produced by Pharrell Williams
T.I. speaks more deeply on Doe. He reminisces on how he met him, and how it feels unfair that he didn’t make it. The beat is maybe the best that T.I. has offered thus far. This is one of the better songs on the album. You can tell that he really thought Doe was going to be a legend in the game.

15. Let Your Heart Go (Break My Soul)
Featuring The-Dream; Produced by Tricky Stewart & The-Dream
This song sounds like a remake of “Dead And Gone”. T.I. just replaces Justin Timberlake with The-Dream. It’s ok. T.I. is once again reflecting on Doe. It’s not bad.

Bottom Line:
T.I. crafted an album that doesn’t resolve any questions that Hip-Hop heads have been curious about. Is T.I. still a good MC? Yes. He crafted some great songs on this album, but is he still elite? It’s starting to seem like we are leaning more towards the “no” on that question. Paperwork was described by T.I. as a soundtrack that had separate acts, and the music would allow you to follow the continuity of the story. I didn’t get that at all. T.I. has a 15 track album, and 14 of those tracks have guests. T.I. and Game seem to be in the same place currently, both trying to hang on to the status that they once had by relying on others popularity. Tip may still be the King, but that crown isn’t nearly as safe as we used to believe.