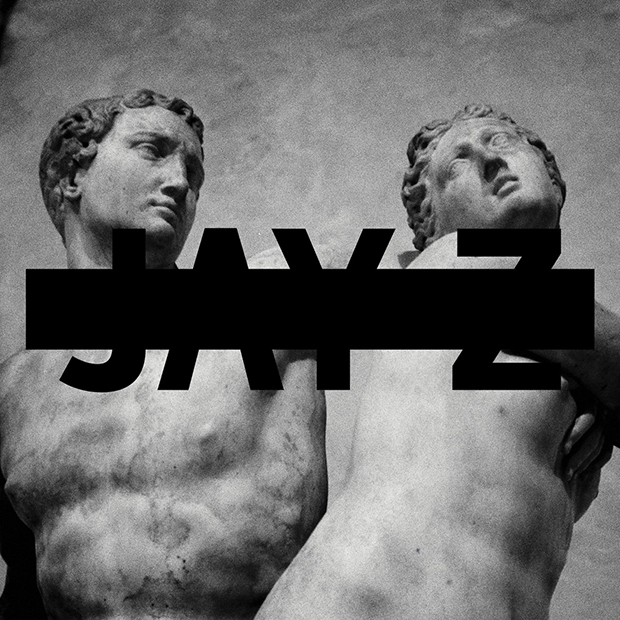 Jay-Z is coming off of a weird time in his life. Many people, including myself, have wondered if Hov would have the ability to carry an album alone again especially after seemingly taking a backseat to Yeezus himself on Watch The Throne. Some people weren’t even sure Jay would get back into the studio to do another album and his daughter was born, but then during an NBA finals game he began the most brilliant advertisement scheme I have ever witnessed. Instead of releasing a single and letting us debate over how good it was he released a slew of small clips. These clips were taken in the studio while he was surrounded by some of the best producers in the game. He spoke on what some of the ideas for the album were, where they came from, and even decoded some lyrics. He has already made this a platinum album, even if the RIAA doesn’t recognize it as such, and a cultural classic. He changed the game forever with this marketing scheme, but what’s the music going to sound like? Well the time to tell is now. Hov is dropping his 12th album since 1996. What’s crazy is this will be up a day before the album actually comes out and it has already sold 1 million copies. Let’s see if the music is worth the hype and sales.

1. Holy Grail
Featuring Justin Timberlake; Produced by The-Dream, Timbaland, J-Roc, & No I.D.
The album starts off with Justin Timberlake singing a ballad about being in love with someone who continues to do him wrong. From the very first line that Jay spits you could tell this album was going to be different: “Blu told me to remind you Niggas”. The fact that the very first thing that comes out of Hov’s mouth is his daughters name reminds you he isn’t in a space that he has ever been before. Along with the hook that Justin Timberlake delivers flawlessly and the instrumentation provided by Timbaland and The-Dream make this song an incredible way to start off the album.

2. Picasso Baby
Produced by Timbaland & J-Roc
Timbo did his thing with this beat. This almost feels like some crazy West Coast music. Jay is doing what he does on this, there is definitely some bragging, but for Hov now, this is keeping it real. Around the 2:30 mark the beat switches and this is when he really goes in,

I never stuck my cock in the Fox’s box but
Damned if I didn’t open Pandora’s box
They try to slander your man
On CNN and Fox
My Miranda don’t stand a chance, with cops
Even my old fans like old man just stop
I could if I would but I can’t
I’m hot, and you blow
I’m still the man to watch, Hublot
On my left hand or not
Soon I step out the booth
The cameras pops niggas is cool with it
Till the canons pop
Now my hand on the bible
On the stand got your man in a jam, again
Got my hands in cuffs
I’m like god damn enough
I put down the cans and they ran amok
My hairpin
Piece skin rupture spleens
Cracks rips go through cribs and other things
No sympathy for the king huh
Niggas even talk about your baby crazy
Eventually the pendulum swings
Don’t forget America this how you made me
Come through with ‘Ye mask on
Spray everything like SAMO
Though I won’t scratch the Lambo
What’s it gonna to take
For me to go
For y’all to see
I’m the modern day Pablo
Picasso baby.

This is another strong song.

3. Tom Ford
Produced by Timbaland & J-Roc
“I don’t pop molly, I rock Tom Ford”. This may very well be a single. This beat and hook is so infectious. If you don’t like this, you’re probably just hating. In the second verse however, you notice that he takes a few shots at the way this new generation expresses issues with each other,

4. FuckWithMeYouKnowIGotIt
Featuring Rick Ross; Produced by Boi-1da, Vinylz,Timbaland, & J-Roc
There aren’t many rappers on this album, but Ross is one of two that actually make this album. Boi-1da does his thing on this song. This was almost tailored for Rozay, but both Emcees do their thing on here. This is strong, but it almost lacks the same vibe as the other joints up to now.

5. Oceans
Featuring Frank Ocean; Produced by Pharrell Williams & Timbaland
This is my favorite joint up to this point. I actually watched one of Jay’s brilliant promotional videos when he spits part of the first verse and explains these line,

Dope boy still smelling like cocaina
White boat, white robe
Can he be more cleaner
The oil spill that BP ain’t clean up
I’m anti Santa Maria
Only Christopher we acknowledge is Wallace
I don’t even like Washingtons in my pocket
Black card go hard when I’m shopping
Boat dock in front of Hermes picking cotton
Silk and fleeces, lay on my Jesus
Oh my God, I hope y’all don’t get sea sick
See me in shit you never saw
If it wasn’t for these pictures they wouldn’t see me at all
Aww, whole world in awe
I crash through glass ceilings, I break through closed doors
I’m on the ocean, I’m in heaven
Yachting, Ocean 11

Along with the Frank Ocean hook, that may actually make me a fan of his again, and the best beat I’ve heard from Pharrell to go along with these incredible lyrics Hov spits, this song is already a leading candidate for best song of 2013. 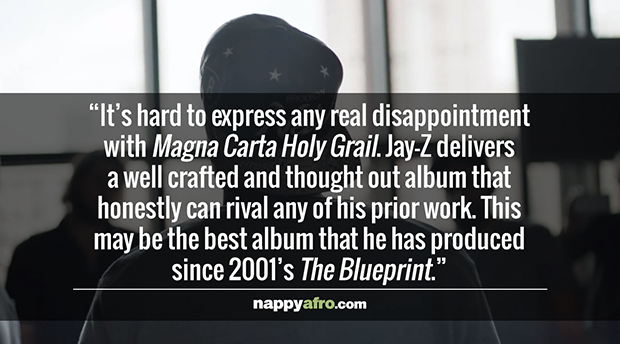 6. F.U.T.W
Produced by Timbaland & J-Roc
“Fuck Up The World” is a rebellious, yet uplifting song about making it. This is bragging, but not on the level that most would expect it from Jigga. This is him bragging to show us it’s possible. The song starts off with, “Just let me be great” and goes into “Don’t be good my nigga, be great”. He spits about the world we live in as young black men and the dreams we can actually attain “after that government cheese, we eating steak”. This joint is amazing as well. So far we are a third of the way through and Hov aint lost yet.

7. Somewhere In America
Produced by Hit-Boy & Mike Dean
Hit-Boy gives Hov a beat that almost sounds like it would be played in the background at a Jazz club. Hov goes into this one. I’m not sure how much I like this one. It’s great, but it seems like filler. I mean he does have a funny line about Miley Cyrus twerking, but there isn’t much else here.

8. Crown
Produced by Travi$ Scott, Mike Dean, & WondaGurl
This beat done by Travi$ Scott sounds like it was made for Watch The Throne. I think the bars on this are amazing, but holding it up to the previous songs on here, this one comes up a little short. Still not bad, just not as amazing.

9. Heaven
Produced by Timbaland & J-Roc
I love this instrumental. Timberland does his thing on this. The bars that Hov spits on here aren’t only crazy and intricate, but they are questions that every person can relate too.

10. Versus
Produced by Timbaland & Swizz Beatz
“Your best shit ain’t better than my worst shit”. This is just a short song dedicated to Hov’s enemies. I kind of feel this might be dedicated to a short nemesis that he has right now.

11. Part II (On The Run)
Featuring Beyonce; Produced by Timbaland & J-Roc
Although this is just a song, you get the feeling that this is really how Jay feels about his wife, “If you go to heaven and they bring me to hell, just sneak out and meet me, bring a box of L’s”. This song is about a woman (Beyonce) having faith and loving him when no one else did. Beyonce compliments this song well as she recipricates the feeling. This is a long way from the days they acted like they didn’t know anything about the rumors of them dating.

12. Beach Is Better
Produced by Mike Will Made It & Marz
“I brought sand to the beach, because my beach is better/ You can have the beach because that beach is whatever” This is another short little song. Although it’s short it is great. I honestly wished this was longer.

13. BBC
Featuring Nas, Justin Timberlake, Swizz Beatz, & Beyonce; Produced by Pharrell Williams
This is the crew joint album. Pharrell orchestrates this joint. This is definitely inspired by Jazz performance. Nas starts this off and drops a nice fun verse; Jay follows and does the same. To be super honest, this was cluttered. I don’t even know where Justin Timberlake was.

14. Jay-Z Blue
Produced by Timbaland, J-Roc, & Justin Timberlake
This song resonates with me quite a bit. This is maybe the most candid Hov has ever been on a track. He talks about everything he fears for his daughter. He speaks on his relationship not working with Beyonce and having to split custody, and how he worries about how his actions can have a negative effect on her.

15. La Familia
Produced by Timbaland & J-Roc
Remember back in 2011 when we heard Jay get dissed by Wayne, and remember how we thought Jay wasn’t going to respond? Well we were wrong.

If this isn’t a shot at Wayne, what is? I doubt Wayne will respond, because Wayne doesn’t care about Hip -Hop. Anyway this is the first time in years it has felt like Jay was in his “crew” mode. He even reps “R.O.C.” to start off the song. Another winner.

16. Nickels and Dimes
Produced by Kyambo “Hip Hop” Joshua & Mike Dean
Perfect way to end the album. Jay talks about small progression in this song, giving to his homies, and the things that people don’t know about him. This song is pretty basic, but perfectly ends this ride Hov took us on.

Bottom Line:
It’s hard to express any real disappointment with this album. Jay-Z delivers a well crafted and thought out album that honestly can rival any of his prior work. This may be the best album that he has produced since 2001’s The Blueprint. With this album everything seems to come full circle, you can listen to Reasonable Doubt and it is the story of a young hustler beginning a journey to become more, and on Magna Carta Holy Grail, you actually see that young man matured. He is speaking to you as you are about to begin the same journey he has endured since ’96 and giving you his wisdom, as best he can. He comes off arrogant at times, but you respect it because you see where he was and where he is now. This could be the last album from him, and I would have no problem with it. This is him hoisting up yet another championship. This is his jumper in the finals against Utah where he pushes off of Russell. This is a great album…….. but not a 5 star. I think this is better than Life Is Good, but I would’ve only given that 4 stars. This is excellent, but not perfect. Then again is the path ever really perfect?