Are We In The Golden Age Of Hip-Hop? 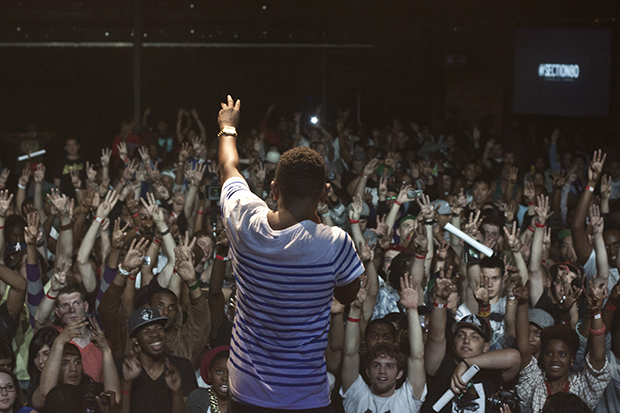 Hip-Hop is truly a wondrous thing. I fell in love with the culture as a whole about four years ago. I was the typical radio listening teenager who loved to hear repetitive choruses with no deeper meaning. Thankfully, modern artists pulled me out of that trance and introduced me to a whole new world of music, a beauty that I didn’t know could ever have existed.

Many of my fellow Hip-Hop heads love to contend that the culture was in its prime in the 90’s. With artists like Outkast, the unforgettable east coast MC, Biggie Smalls, Big Pun and the one name I cannot fail to mention, Tupac. I am going to boldly disagree.

With the amount of upcoming artists in the past four years, the realization that we are in the golden age of Hip-Hop is inevitable yet many people will not accept it. The amount of Hip-Hop heads that are stuck in the past and unwilling to accept new styles is quite ridiculous.

The genre back then consisted of impressive flow and lyrics but did lack in one major area, production. The beats presented in the birth of Hip-Hop tended to remain repetitive, they never varied as much as most do now.

Take, for example, “Pusha Man” by Chance The Rapper. The then 20 year old MC dropped this song along with his free mixtape, Acid Rap (a classic in my opinion) and pulled something so crazy, people were frantic for more. Midway through the track, a 30 second pause ensues followed by a dark melody that Chance soothes the listener into. He provides two skillfully written verses along with a catchy chorus and Nosaj Thing, the man who can take credit for creating such a masterpiece, adds ANOTHER beat change in the outro to the track. Back in the 90’s, no producer could do this. Their primitive equipment was not capable of creating such a thing of beauty.

Another aspect of Hip-Hop that I would like to touch upon is variety. The early years of the genre lacked in variety. Sure, we had our typical sad songs to get us through our darker times but did we have artists who speak on extraterrestrials and planets? Did the 90’s harbor a plethora of rap groups that spoke on unspeakable topics? Did the 90s ever introduce new ideas and conspiracies to the listener? The answer is simple, no.

Nowadays, we have Odd Future delivering genius concepts and ignorant noise rap when necessary. We have Ab-Soul for the times when we want to feel intellectual or mourn for the death of his long lost love. We have Dizzy Wright for when we want to feel a bit more positive about everything that surrounds us.

Overall, the 90’s were the epitome of Hip-Hop. That decade receives a little more credit than it deserves but it does merit a piece of the pie. Without the 90’s, we would not have the artists and musical influences we do today, but as an avid Hip-Hop listener, I can only ask the people to do one thing and that is to listen.

Just because we had a few years of Hip-Hop in a coma does not mean that it is dead. We are in the golden age of the genre and we’re letting it pass by because we won’t stop to smell the roses. Take some time and listen to Control System, good kid m.A.A.d. City, Acid Rap and Man on the Moon II among many other great albums. Realize that we are in the middle of the Hip-Hop age of enlightenment. Open your ears.