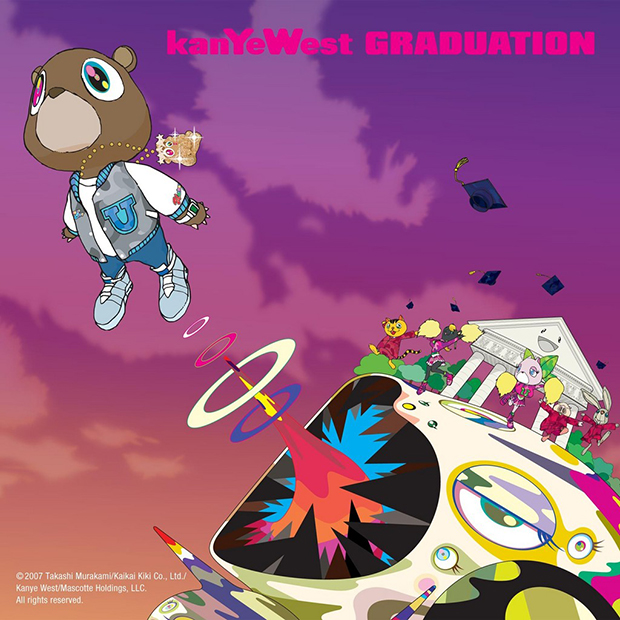 Third we have Kanye’s third studio album Graduation. This album was the one that helped open the floodgates that allowed artist such as Kid Cudi and Lupe Fiasco to prosper within the mainstream. Whether you find that good or bad is up to you, but what can definitely be known is that this album is pretty damn great. This was Kanye reaching out to his audience in an attempt to give off inspiration, while also switching to a more electro or house style in music.

At the time this was a big deal, given that no other rapper as big as Kanye had ever put out this type of sound to the masses. And to top it off, ended up getting into a sales competition with rapper 50 Cent who was set to release his third studio album Curtis on the same day, September 11. Pretty damn good day for Hip-Hop right?

All that aside, the music itself had much quality. The beats on this thing were filled synths, but still had bangers like “Stronger”, “Can’t Tell Me Nothing”, and “Barry Bonds” as well as more mellow tracks like “Flashing Lights” & “Everything I Am”.  The closest song that feels anything like Kanye’s work before this album would be “The Glory” which features Ye’s signature soul samples. The lyrics on this album aren’t as high-powered as some of Ye’s other work, but they’re very introspective and, paired up with the beats, make for a great combination for an uplifting album that finishes off beautifully with the track “Big Brother”, which is an ode to Jay Z. The only track I’d skip on this is “Drunk & Hot Girls”.

If you plan of buying this one don’t cop the digital. Raid every Target, Wal-Mart, Best Buy, or Record Store until you find a physical copy, because the artwork for this shit is A+ and deserves your money.