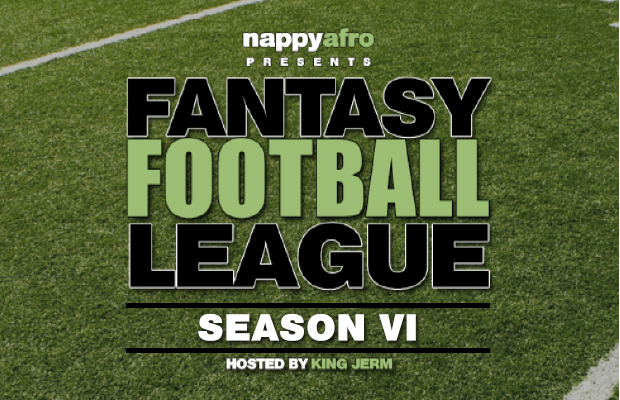 Week 2 kicked off of the BEST fantasy football league on the planet! Let’s see what the results were. Not too much to lead into; let’s get right to it.

Filthy McNasty – 88.64
Castley Rock King Slappers – 133.96
GQ Blu took Filthy behind the woodshed and gave him the business. Can’t lie and say it doesn’t bring me joy to see this guy lose.

El Duque – 138.92
Dr Mom Loves Chocolate – 87.88
El Duque stayed undefeated by beating the Doc. Not too much could be done in this one, he was too much for her team.

str8outtafucks – 54.40
Monsters – 106.40
Monsters stayed true to his name and gave Faraji nightmares after this performance. Only thing saving him from the Do Better award was the shitshow known as my team.

The Romophobics – 84.66
GoHard420 – 98.66
GoHard managed to stay unbeaten by doing away with Cornell and the Romophobics. I really don’t like to congratulate him either, so I’ll leave it at that.

TyshonRockz – 137.94
Los Pollos Hermanos – 93.30
The battle of Harlem Heat has gotten one sides of lately. This one wasn’t any different. Tisha rolled Stevie Ray up like some mid and SMOKED that ass!

North Caka Laka All Day – 79.30
IALWAYSWINSOMETIMES – 75.74
Jenkins pulled out a close one against Gomez and found himself in uncharted territory…2-0 for the first time ever. How long can he last?

Yeah, I was feeling a little lazy and forgot to post last week, so what’s better than a double dose!

HEISENBERG 69.36
The Romophobics 135.22
I manage the worst team in the league. I am what is considered a bye week. We just can’t get right this year. I don’t know what to do at this point.

Castley Rock King Slappers 82.08
Dr Mom Loves Chocolate 80.34
The Doc dropped her second game in a row, but if she would have started a TE, she might would have won this week. Her loss, GQ’s gain.

Monsters 88.88
Filthy McNasty 99.82
It pains me to type this, but I’m obligated to do so. Filthy finally got one in the win column.

GoHard420 125.68
El Duque 132.60
The Battle of the Ravens fans went to El Duque who stands as the only unbeaten team in the league. He plays me next week, so expect him to remain undefeated afterwards.

Los Pollos Hermanos 130.10
str8outtafucks 134.50
The Oldest and one of the best rivalries in the league went the way it ALWAYS goes. Faraji wins. End of story.

IALWAYSWINSOMETIMES 109.48
TyshonRockz 142.50
Tisha must be a pothead, cause this is the second person she has smoked in as many weeks. Gomez didn’t have a chance at all. Tisha is quietly building a JUGGERNAUT. Watch out.

North Caka Laka All Day 126.26
Head Bangaz 136.06
Well, the winning streak for Jenk came crashing to an end. The Battle of the Giants fans went to Head Bangaz. Jenk just ran up on the wrong guy this week.

Well, there you have it; hopefully next week I will have better news for you.