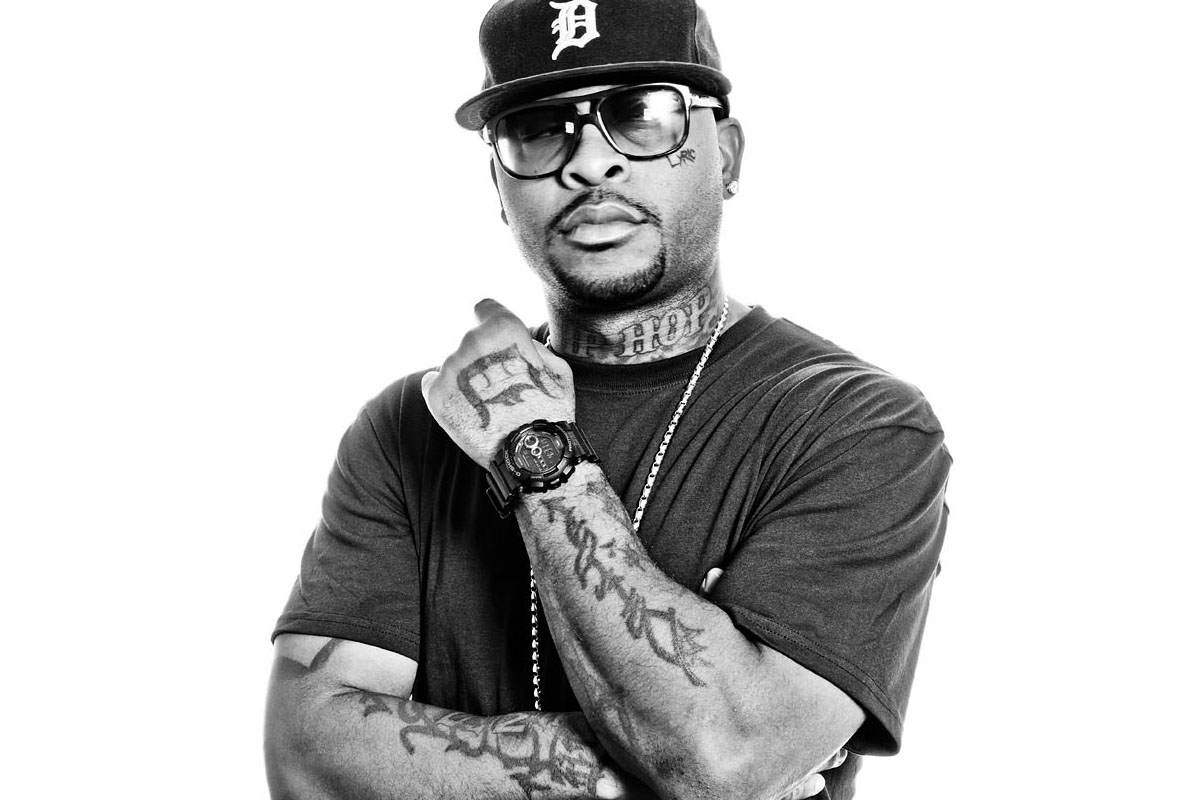 Even though Royce da 5’9″ has been in the limelight more than ever in the last 5 years, it’s hard to believe that Layers is his first solo outing since 2011 with Success is Certain. He’s managed to stay busy with several Slaughterhouse projects, a highly successful collab album with Eminem, and a Hip-Hop head’s wet dream by forming the group PRhyme with DJ Premier. Now Royce is biz-ack to pick up the microphone solo dolo. What has Royce got to say after 5 years of extreme highs and even lower lows? Let’s find out…

1. Tabernacle
Produced by S1 & J. Rhodes
To start off the album Royce spins a story that has to be the purest definition of the word bittersweet. Over a gospel inspired beat by S1, we hear the story of how in one single day Royce lost his grandmother, saw the birth of his first born son, played his debut headlining show and met future collaborator Eminem. This story is such a fucking rollercoaster and the Detroit spitter places us there right next to him. Amazing intro.

2. Pray
Produced by Mr. Porter & G Koop
Continuing the religious aspect, Royce moves the scope away from his personal situation and looks at the world. What he sees isn’t chipper. Terrorism, drug addiction, violence are some of the things Royce takes a moment out to pray and meditate on. Bangin’ beat from Mr. Porter that Royce glides over easily.

3. Hard
Produced by AntMan Wonders
This beat selection focuses on a more optimistic tune as Royce rhymes about overcoming negativity and exposes fame as something that’s not all that it’s cracked up to be. Replacing his regular rap flow for one that sounds more like a spoken word poet, Royce’s truths somehow hit harder. AntMan Wonders will probably be locked up soon since he kills this beat with some funky horns and cinematic production. This is a standout track for sure.

4. Starter Coat
Produced by Mr. Porter
Mr. Porter goes into some experimental production on this track that sounds like a cross between a boom bap beat and avant-garde Timbaland production. Royce drives us down his memory lane to show us where everything started for him. Nothing is held back with Royce talking about his uncle’s crack addiction and his own problems with alcohol. This track showcases Royce’s ability to paint vivid pictures with words.

5. Wait
Produced by Jake One
Though Jake One has thrown a soulful beat on the table this track still goes hard. So hard in fact it would be fair if you didn’t notice Royce rapping about his life’s extreme ups and downs on the first listen. Royce again proves he can carry himself as a real boss, adding another banger to the album.

6. Shine (Skit)
Royce shares some knowledge handed down by ATL’s king T.I. that turns out to be a motivational sound bite. This shit flows nicely into the next track.

7. Shine
Produced by Nottz
It might not be what you’d expect but Royce harmonises nicely on this hustler’s anthem. He takes the base out of his voice to switch to a slightly raspier tone that matches the lullaby styled beat flawlessly. The MC shows he can rip any beat even if it’s a mellow one. His lyrics add a roughness to the sleepy production and it works.

8. Lincoln (Skit)
For some reason I was expecting a Hannibal Buress intermission (shout out to the Broad City fans out there) but instead we get a somewhat funny skit about a character called Stinkin’ Lincoln, a fake player with a big mouth. It’s a bit of a head scratcher why this skit is needed but the next track makes things clear.

9. Flesh
Produced by DJ Khalil
Lincoln pops up again to provide some comedic ad-libs for this bouncy diddy. This clown of a character is set up as juxtaposition to Royce’s real ways. Another braggadocious lyrical tidal wave that fits into the album’s overall theme (so far).

10. Hello (Skit)
Featuring Melanie Rutherford; Produced by Daniel Smith
A song/skit hybrid about a side chick and wifey bumping heads over the phone. A possible throw back to Biggie’s “One More Chance”. Ratchet was never sounded so good with Melanie Rutherford’s bitter crooning.

11. Misses
Featuring K. Young; Produced by DJ Khalil
Royce takes his focus off the haters and sucker MCs to spit a song about that couple life, while fooling around on the side. To the naked ear it has the aspects of a love song but is far from it. It’s more of a warning for those wanting to stray away from their significant other. Groupie love sometimes isn’t worth it. An Easter egg to Lincoln’s stinkin’ ways is laced into the track too.

12. Dope!
Featuring Loren W. Oden; Produced by DJ Pain 1
Which brings us into “Dope”, a track about the pitfalls of drug dealing as well as the potential success in it. From his storytelling abilities Royce has taken on the perspective of a fictional character that could be represented by millions in real life. Without its introspective themes this track could come off as repetitive but Royce keeps things interesting enough through wordplay and top notch storytelling.

13. America
Produced by S1 & Epikh
Sticking with politics we get right into Royce’s version of America. A place where anyone can make it in life or catch a bullet to end it. An ugly picture is set with S1’s marching beat framing it all. This is head bopping music with a revolutionary message.

14. Layers
Featuring Rick Ross & Pusha T; Produced by Mr. Porter
One awesome thing that Royce has achieved so far on this album is the flawless flow of one song into the next. You can break Layers into sections as it plays out like a movie. Sticking with the theme of politics with a dope boy twist, Pusha and the Bawse rap about their own perspectives of America with a Malcolm X sound bite substituting for a hook. A haunting beat that each MC crushes in their own right. Check the angel like backup vocals and tell me you’re not moved.

15. Quiet
Featuring Tiara & Mr. Porter; Produced by Mr. Porter
Unfortunately here Mr. Porter’s Auto-tuned vocals clash with his own beat. The production sounds like Mobb Deep stabbing music with its dark guitar and Royce’s menacing threats so the artificial vocals sound a little played out. None the less it may be the weakest track on the album but far from terrible. Tiara rips through her verse while sounding like a by-product of DeJ Loaf. Minus the chorus it ain’t half bad.

16. Gottaknow
Produced by S1 & Epikh
Sticking with the Mobb Deep comparison, Mr. Porter must have been listening to Hell on Earth a lot because this is some dark production here. This is no bad thing though, just inspired. The team of Royce and Mr. Porter works well. Must be that Detroit chemistry. The minimal beat allows Royce’s lyrics to take centre stage. Pay attention.

17. Off
Produced by Mr. Porter
With no hook and a clunky but token beat Royce uses the outro to spit for 3 minutes straight about pretty much everything on his mind. Everything from venting about the frustrations with major record albums to Jay Electronica stealing an Illuminati member’s wife, no topic is left untouched. A fitting final song.

With no Slaughterhouse, Eminem, or even DJ Premier appearances, Royce has started to finally create his own path in the right way. Adding to his independence is a very small list of features over the 17-track album. With only two rap features, Royce has decided to show the world that he can hold his own. Though long time fans have known this for the longest, it’s just now he probably has his biggest audience ever. Royce is an MC who has aged gracefully and gained a lot more fans because of it. He’s kind of like a street version of Black Thought with his introspective ways and no fear of conflict.

The teaming up of former enemy and fellow Detroit artist, Mr. Porter has proved to be a good thing with the producer providing 6 out of the 17 beats. This collaboration is another testament to Royce’s music maturing and his personal grown ways. Good art should always be priority. Layers is the perfect title for this album as Royce shows he has many. Like any human being there is more than one way to look at life. With standout tracks like “Hard”, “Off” and “Wait”, the album showcases Royce Nickel Nine’s versatile skills. Fans and newcomers will be more than happy with this one.