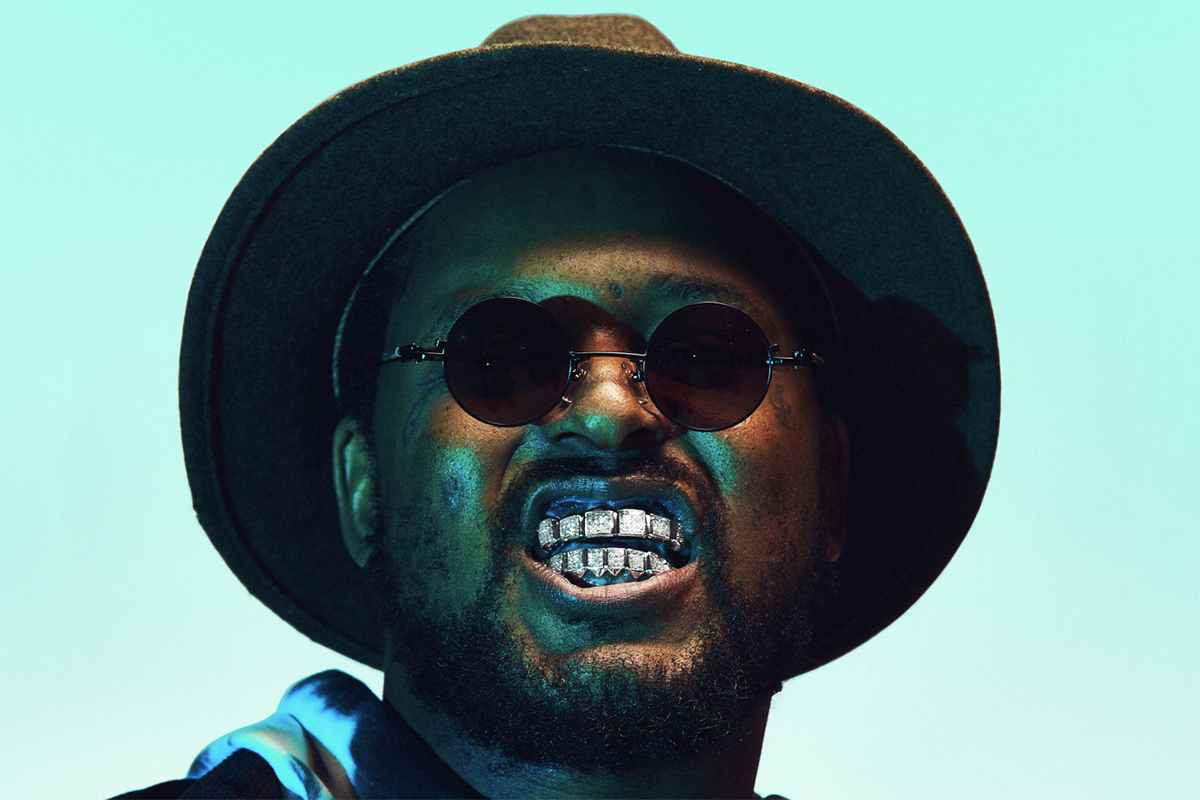 Jeeeeeeez… it’s been way too long since I’ve given a gift and a gem to these blog streets. I always seem to come through at just the right time, and I do it for the people. I’m great. I got legendary posts, I got a whole catalog. I been chillin though…just waiting for the right time to rise from the ashes to drop off gifts. Consider yourselves lucky, I’m in rare form.

ScHoolboy Q is back, everyone. Armed with a new grill, some lush greenery and a chip on his shoulder. Q gave us Oxymoron a few years ago, an album that I really liked, although like almost every album, it had its flaws. A few bangers, some awesome subject matter and a couple of low points. Not too long ago that album went Platinum. Now it’s time to see if he’s prepared to deliver a second time… let’s get it.

1. TorcH
Produced by Nez & Rio
I’m loving the way Hip-Hop is going with more instruments compared to computer sounds. This joint here has a heavy ass guitar and it’s monstrous. This serves as a smoother introduction compared to “Gangsta” from Oxymoron. I like it though; the ad-libs and subject matter are on point. It serves as a fair lead off for the album.

2. Lord Have Mercy
Produced by Swizz Beatz
This is a smooth and short joint that I dig for what it is. It sounds a lot like the second half of the “Levitate” joint from Kendrick’s untitled unmastered. It’s just a little introspective track but it leads up to something scary…

3. THat Part
Featuring Kanye West; Produced by Cardo, Yex, Cubeatz, & Sounwave
Okay okay okay okay okay okay! Kanye West did his thing here man, he snapped and came with some memorable and hilarious lines. Not gonna lie to my readers though man, I have no idea what “THat Part” means, but this a fire song that you can do your little trendy dances to, and dab and whatnot. ScHoolboy did what he had to do on this.

4. Groovy Tony/Eddie Kane
Featuring Jadakiss; Produced by Tae Beast & Dem Jointz
This one was released as a single like a month ago or somethin’. This song here is probably one of the grimiest joints of the year period. This song makes me feel like I can get in a fistfight with Mike Tyson. Q carried himself well here, but then when Jadakiss came in everything changed. Jadakiss fit so perfectly with this song. His raspy voice just mixes well. When he said “Runnin’ wit the rebels, 3 man weave with the Lord and the devil…”. That was infinite flame emojis.

5. Kno Ya Wrong
Featuring Lance Skiiiwalker; Produced by The Alchemist (one of the GOATS) & J.LBS
This here got Schoolboy Q doing some singing and reflecting. It’s like a slowed down and smoother version of that “Gimme Got Shot” joint from YG’s album. I’m not a fan of Q’s singing, but Uncle Al really saves and carries this track, until Skiiiwalker gets there and steals the show. This is his song. I’m not happy with it but I’m not mad either.

6. Ride Out
Featuring Vince Staples; Produced by Sounwave
Say bro, this joint here is overly dirty. This beat and whole vibe is disgusting. Two of my favorite Crip rappers together on one song??? I was here for it and they got it craccin’. Vince Staples came through and WRECKED it, and ScHoolboy did his job just as well. The features on this album so far have just made sense,and they’ve fit.

7. WHateva U Want
Featuring Candice Pillay; Produced by Tae Beast
Not gonna lie mane, as soon as this beat came on I immediately began to vibe. This seems like it’s radio friendly but it’s still groovy as hell too. I don’t know who Candice Pillay is though… okay I just looked her up, that’s bae now. This is different for Q and I gotta say I dig it.

8. By Any Means
Produced by Cardo & Yex
I believe I hear some Kendrick Lamar vocals. I’m surprised there’s not more TDE features on this album. With that being said I can see myself bumpin’ and diggin’ this joint while I’m drivin’ around the city. There isn’t too much to it, it’s kind of a hustler anthem and it’s just aight. But the NEXT joint…

9. Dope Dealer
Featuring E-40; Produced by YOUNG METRO YOUNG METRO YOUNG METRO & Southside
As soon as I heard the voice of my guy Thugger say “METRO BOOMIN WANT SOME MORE NIGGA”, I knew this track was gonna be a monster. This beat here is crazy, and E-40 comes in and does his thing; I love his part. E-40 doesn’t get enough credit for being the reason for a lot of slang today and how he helped pioneer the Bay sound. ScHoolboy really hasn’t slacked this whole album.

11. Big Body
Featuring Tha Dogg Pound; Produced by Tyler, The Creator
OKAY I LIED. I LIED. THIS song has my favorite hook. This beat has Tyler all over it man. It reminds me of the joint “OK” on Mac Miller’s album. Q snaps and eats up every verse here. This joint is amazing yo. This makes me wanna actually hit a party up, and I don’t party. And Tha Dogg Pound does not disappoint as I expected. I really do think this joint is nothing but pure old school West Coast heat.

12. Neva Change
Featuring SZA; Produced by DJ Dahi and Dopson
My beautiful brown angel SZA comes in and lays some angelic vocals down here on this soothing and smooth change of pace from the last joint. This album so far has a pretty awesome balance between smooth and energetic songs. I’m gonna be straight up with y’all, I’m here for SZA, but Q does his thing here.

13. Str8 Ballin’
Produced by Nez & Rio
This joint kinda has that “Man Of The Year” vibe from Oxymoron. There really isn’t that much to it, but it’s certainly got a cold beat, and I love Schoolboy’s lines… especially when he said “Snoop ain’t the only rich Crip!” man it had me super hype. Y’all have no idea… or maybe you do. I LOVE this joint.

14. Black THougHts
Produced by Willie B
This is Q doing more reflecting on his life and how far he’s come. At the beginning of this song there’s someone speaking but I can’t figure out what it is. I love the Kendrick Lamar vocals too… kind of like “For Free” on To Pimp A Butterfly where he said…“What’s WROOOOOOOOOONG nigga…???” In the second verse he kind of has this Stop The Violence approach to it, I’m not that mad at it.

15. Blank Face
Featuring Anderson.Paak; Produced by Sounwave & Russell
Man I really like Anderson.Paak. He’s very smooth and you can’t really compare and categorize him. Especially if this is your first time hearing him, because that’ll mess up your opinion. Anderson is singing for ScHoolboy, and it reminds me of “Prescription/Oxymoron” from his last album as far as tone and in some cases subject matter. Let’s go back to .Paak real quick, he did his thing man I love it.

16. Overtime
Featuring Miguel & Justine Skye; Produced by Cardo, Yex, & Frank Dukes
Not gonna lie, as soon as I saw this joint and feature list I immediately thought “Studio Pt. 2” and I was pretty much right but I like this a lot better because I really like Miguel. This has so much potential to be a dope ass single that’ll chart high too.

17. Tookie Knows II
Featuring Traffic & TF; Produced by Nez & Rio
This is a nice little collar between Crip gang members to close the album. This is a pretty cool way to close out the album too. Got random gang members tellin’ their sides of the story. I can appreciate this.

Okay to close this gem out, I gotta say I’m very impressed with Q and his work. His outdid himself. All of the features are on point, the production is lush and consistent, and Q is spittin’ better than ever. He actually improved substantially. This joint is great. I’m glad this was awesome because everyone knows we need as many rap gems as possible in this generation of rhinestones. The final grade…

Aight y’all I’m out. I’m gonna go play Pokemon GO. I mean it’s a Dragonair across the streets in the neighbors yard. Pray for me. I’m gone.